Fostering Joy: A Culture of Cooking

A culture of cooking is about so much more than foot—it’s a creative, unfolding process that in the best of times fosters memories and joy. 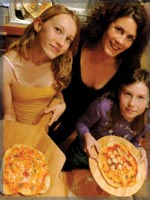 When I was growing up, a product of the ’60s, I didn’t know what real cooking was. My mother, like so many in her generation, found cooking just another tedious chore to add to her many “homemaking” duties. There was no excitement, no joy (although she did have the “Joy of Cooking” book) in preparing meals. There were two or three dishes on which she would spend some time, but for the most part, our meals came out of a box or a can.

When I was growing up, a product of the ’60s, I didn’t know what real cooking was. My mother, like so many in her generation, found cooking just another tedious chore to add to her many “homemaking” duties. There was no excitement, no joy (although she did have the “Joy of Cooking” book) in preparing meals. There were two or three dishes on which she would spend some time, but for the most part, our meals came out of a box or a can.

She was unmoved by the Julia Child craze, though she would have the TV show on occasionally. I would watch it and marvel at the strange falsetto voice of the woman in front of the camera and wonder if she really was a woman. Needless to say, I didn’t pay much attention to the actual cooking lesson; she did make it look fun, whatever she was doing. But in our house, there was no “Mastering the Art of French Cooking” or any other Julia Child cookbook on our shelves. There was no culture of cooking for us o

r anyone I knew.

By “culture of cooking,” I mean a culinary tradition that is passed down from generation to generation. In the U.S., this tradition was lost in the “convenience foods” explosion of the ’60s; soon, we couldn’t even recall how we ate before the advent of Spaghetti O’s, Pringles and Taster’s Choice Freeze -Dried Coffee. Microwaves hit the market in 1967, and the technical revolution finished off traditional cooking by making it too easy to prepare food. Poor Julia tried so hard to combat this movement, but it was a losing battle.

By the time I was in high school, my mother had been working for several years as a teacher. She announced (and rightly so) that it was unfair to both work and cook while the rest of us only worked. We agreed—and were also secretly relieved, having been recent recipients of the World’s Worst Meal ever: My bargain-hunter mother had discovered a cow tongue on sale at the butcher shop. She did not know how to cook it but figured it must be prepared somewhat like her beloved liver and onions. So she threw it in a skillet; no frills, no fancy sauces, no delicate cuts. Just a slab of tongue in a pan. I don’t think I need to describe the many disadvantages of frying a cow tongue in a skillet with nothing but onions…and burning it, as well. Never one to be easily vanquished, she forged onward and served the small fleshy mountain on a platter a la carte. Fortunately for us (I had already staged a strike at the first burned whiff), after one tentative bite, my random-cow-

My mother did her best to prepare me for the world by giving me small jobs, like chopping the parsley on Thanksgiving or showing me how to fry an egg. How could she teach me anything, really, when she knew very little herself?

But more significantly, she hated the very act of cooking. She had no connection to it; no one had ever shown her that cooking could be, well, fun. So I went out into the scary world ill equipped for even making a pasta sauce.

In college, my best friend Michael and I did our best to teach ourselves, tackling exotic recipes and cooking for hours. It was about exploration. It was about learning to love the act of cooking.

Eventually, I found myself living in Italy, married, with two children. I had alwa

ys loved Italian food, but there I was totally immersed in culinary tradition. Now I could have real knowledge of what I had only read about in cookbooks. It is important to experience how something should taste, and understand the wisdom behind the cuisine before successfully cooking it.

Walking through the street markets in Napoli, I quickly learned that the only produce available was what grew in the region and what was in season. There were no peas in winter, no brussel sprouts in spring, no wild asparagus in fall. So I learned not only how food was supposed to taste, but how to cook seasonally appropriate meals. It felt so much more organic, so much more connected to the food we ate. We found ourselves looking forward to each season for the culinary pleasures it would bring: We looked toward autumn for our favorite pumpkin pasta, spring for tiny, wild strawberries. Winter brought truffles and mushrooms; and summer, eggplants and artichokes.

Finally and gratefully, in my 36th year, I discovered a “culture of cooking.” I had to travel the world for it, but there it was in all its glory.

Now that my daughters are old enough, I want to pass on this culinary legacy and share with them the lessons I have learned. I do not want to teach them how to read recipes verbatim from cookbooks, or how to measure e

xact ingredients. I want to teach them how to love the act of cooking. I want them to consider the ingredients, to honor the process, to explore and create, to have fun.

With all the flurry surrounding Julia Child (the movie “Julie & Julia,” the re-release of “Mastering the Art of French Cooking,” and the infinite related articles about food) I began thinking in a more defined way of how I could teach my daughters—no, to inspire them—to cook. I would like to send them out into the world with swords and smarts and a paring knife.

Recently, I sat my daughters down and told them this. One seemed excited, the other…not so much. I presented my proposal in a way that was not just about cooking a meal. I spoke about creativity, discovery, communication, the pleasure of listening to great music, drinking a nice glass of wine and tasting the food. “When we prepare a meal,” I said, “we turn on Frank Sinatra (or French café music, or maybe that Arabic groove…), crank up the volume, fix a drink and throw ourselves in. We create our atmosphere and the magic of cooking will rise out of that.”

Now when we cook together, we talk about our day and the ideas it has inspired as we chop and measure and boil. We laugh at memories and share our dreams. In other words, we enjoy each other. Life seems uncomplicated and as rich as the delicious smells surrounding us. For a moment, time stands still. It will always be like this, won’t it? At least it seems so, right here, right now.

My daughters have one night a week when they cook. They choose the meal they wou

ld like to prepare and tell me what ingredients I need to buy. As they play in the kitchen, I watch nearby in case they need my help. That’s an excuse, really; I just like to bask in their radiant light, and in the smells of a lovely meal.