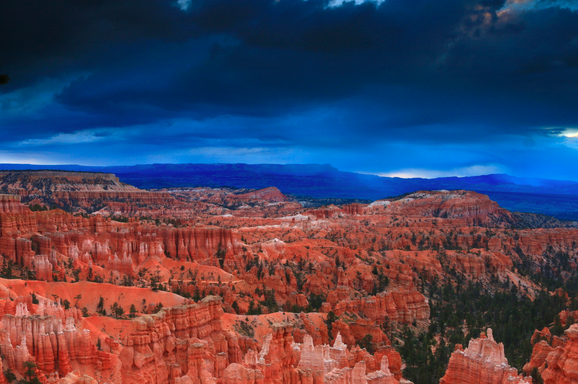 The Trump administration had stripped endangered species protection from Yellowstone grizzlies as a favor to wealthy trophy hunters. Wyoming and Idaho had already issued hunting licenses for grizzlies that leave Yellowstone and Teton National Parks.

“The bears should not be killed in a hunting season made possible by an illegal government decision,” said an attorney for EarthJustice.

In July, an intense thunderstorm hit Zion National Park. Rockfall and water damage closed popular trails to Angel’s Landing and Upper Emerald Pools. As of this writing the trails are still closed, with the cost of trail restoration adding to an already existing $65,291,893 maintenance backlog at Zion.

For many years the U.S. Congress has failed to fully fund the national park. Deferred maintenance projects are building up. As of 2017 Utah’s national parks needed $266,100,893 worth of repairs on buildings, campgrounds, trails, roads and water systems.

One source of money for national parks is the Land and Water Conservation Fund (LWCF), a federal program authorized in 1964 that uses money from offshore oil and gas drilling to pay for acquisition and protection of land for outdoor recreation. In 2018 the State of Utah will receive $1,344,543 from LWCF. The Fund has never had permanent authorization. Every so often Congress needs to renew it, and it’s set to have expired on September 30, 2018.

Utah Congressman Rob Bishop (R-UT-1) is an enemy of LWCF. In 2015, as chair of the House Natural Resources Committee, Bishop tried unsuccessfully to force Congress to replace LWCF with a substitute, deceptively named “PARC Act.“ Instead of funding parks, PARC money would have gone to STEM education for petroleum engineers and payment in-lieu of taxes to rural counties.

The conservative Heritage Foundation (notorious for spreading climate-change denial) has tried to frame LWCF as an attack on private property rights because it allows the public to buy land that used to be private.

More on money for parks

With the Land and Water Conservation Fund in danger of expiration, National parks still need money. Utah Congressman Rob Bishop (R-Ut-1) and Raul Grijalva (D- AZ-3 ) have co-sponsored a bi-partisan bill to cope with the deferred maintenance backlog at America’s national parks. The “National Park Service and Public Lands Legacy Restoration Act” would use money from public lands energy leasing to pay for the public lands maintenance backlog. The catch is, unlike LWCF, none of the money could be used to purchase new recreational lands. This presents a problem when, for example, private land owners threaten to develop inholdings or when private lands block public access to recreation. It’s good to fund public lands maintenance, but this bill does not adequately replace LWCF.

If the federal government won’t protect Bears Ears, local citizens will have to do it themselves. On September 22 Friends of Cedar Mesa held the grand opening of a new Bears Ears Education Center in Bluff, Utah.

After President Trump downsized Bears Ears National Monument, tourists started arriving in droves to see what the fuss is about. With no coherent management plan or visitor education, the visitors are trampling the fragile desert and damaging archaeological site. Friends of Cedar Mesa decided to take matters into their own hands. They raised money through crowdsourcing to purchase the old Silver Dollar bar and converted it into a visitor center.

You can donate to the Center on the Friends of Cedar Mesa website.

Utah Rivers Council has declared a major victory in the fight to stop the Lake Powell Pipeline. The Federal Energy Regulatory Commission (FERC) declared that they are not the right agency to permit water diversions from the Colorado River.

The State of Utah has already spent $37 million trying to get FERC permits for the water boondoggle. Now the permitting process needs to start all over.

The State of Utah uses questionable water forecasting to justify the expensive, environment- ally damaging project. For instance, at a public meeting in Washington County, a spokesman for the Governor’s Office of Planning and Budgeting said that second-home owners should be included in population counts because even though they don’t live in Utah they still squander water on their lawns.

Public meetings have been scheduled on the downsized Escalante Grand Staircase National Monument but if Wasatch Front residents want to attend they’ll have to make a trip down south.