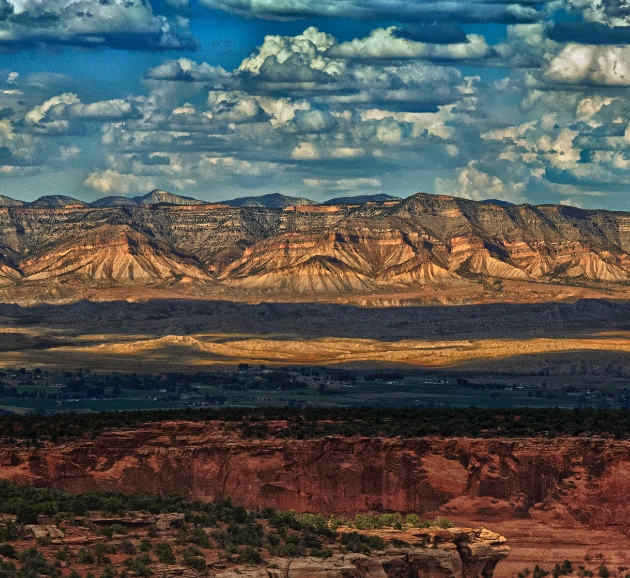 An intense wind storm that hit northern Utah on September 8 toppled thousands of big, old trees, decimating historic groves in Liberty Park, the Salt Lake Cemetery and the University of Utah. Gusts of up to 112 miles per hour were generated by “down slope wind” when a blob of cold air on the eastern slope of the Wasatch Mountains flowed over the ridge-top into the Salt Lake Valley. Since oceans generate weather, extreme weather in Utah is related to tropical storms which are becoming more frequent and more intense. 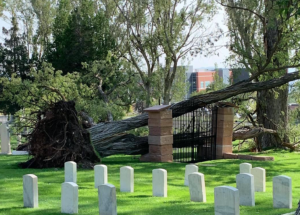 Salt Lake City has begun developing a new master plan for natural lands, urban forests and city parks. The starting point for the plan is a 2019 needs assessment that cites access to nature and recreation opportunities as key to quality of life. In September, the city began to collect survey data about parks and open spaces, launching the yearlong planning process.

Currently, the city owns 689.8 acres of parks throughout the city and 1,693.7 acres of natural lands, mostly in the Wasatch Mountain foot­hills and along the Jordan River. Based on population projections, 94 acres of new parks will be needed by 2040 to meet future needs.

Unfortunately, there is not much empty space left for new parks. While most city residents live within half a mile of parks and open space, poor trail connectivity means that they can’t always get there by walking or biking.

Still, as the needs assessment says, “There is a real opportunity to go beyond focusing on the numbers, and to address parks and natural lands as essential elements for better air quality, climate change mitigation, energy efficiency and environmental justice.”

House hearing on unfit leadership in Bureau of Land Management

On September 9, the House Committee on Natural Resources held a hearing on William Pendley’s unfitness to lead the Bureau of Land Management (BLM). Pendley has been installed as head of BLM by president Trump without a Senate hearing to confirm his appointment, a situation that Collin O’Mara, CEO of the National Wildlife Federation, calls a “constitutional crisis.”

O’Mara testified that BLM lands are essential to address both wildlife conservation and climate change and said, “We haven’t had an honest conversation about the value of these lands. There needs to be a massive re-thinking.”

Tim Whitehouse, executive director of Public Employees for Environmental Responsibility (PEER), cited Pendley’s problematic support for rural “constitutional” sheriffs who refuse to enforce federal rules. “It’s very easy to break something and very difficult to put it back together,” he said.

Sarah Thomas, Land Programs Manager, Conserve Southwest Utah, slammed Pendley’s BLM for promoting construction of a four-lane highway though the Red Cliffs Desert Reserve in Washington County, Utah. She introduced the committee to an adorable desert tortoise named “Tui” (short for “hurry up” in Paiute language) whose species is threatened by the highway.

All speakers expressed deep concern about the damage a hostile actor like Pendley could do between now and January 2021.

In August, wildfires raging in California caused weeks of hazy skies in Utah along with a spike in particulate air pollution that made it hard to breathe.

University of Utah professor Jim Steenberg, author of the Wasatch Weather Weenies blog, criticized Lee’s politicized disrespect for science: “Scientists know what is happening, why it is happening, and that it’s not going to get cooler, as suggested by President Trump this week. We also know that ‘cycles of burning and regrowth’ are natural, as argued by Senator Mike Lee, but also that these cycles have been altered by forest mismanagement and climate change, contributing to extreme fire behavior.”

The State of Utah is trying to stage a water grab and undermine years of cooperative planning for Colorado River water, according to a letter signed by six western governors.

The governors of Arizona, California, Colorado, Nevada, New Mexico and Wyoming asked the U.S. Department of the Interior to deny approval for the Lake Powell Pipeline (LPP), a multi-billion-dollar water project designed to move Colorado River water to southwest Utah. Water rights from the Colorado River Upper and Lower Basins are allocated according to the 1922 Colorado River Compact which notoriously overestimated the amount of water in the system.

Currently, population growth in the West is increasing water demand at the same time that ongoing drought stemming from climate change is reducing supplies.

The letter says Utah made false claims about negotiating LPP with other Colorado River Basin states, and that, in fact, “Compact issues and related substantive legal and operational issues remain unresolved.”

In August the Bureau of Land Management (BLM) released a catastrophically bad motorized travel plan for the San Rafael Swell that doubles the miles of open trails from 300 miles to more than 765 miles. The plan creates a spider web of redundant routes, along cattle trails and dry washes.

This means off-road vehicles are likely to intrude in places that people use for hiking, mountain biking and other quiet recreation.

Noise, dust and dangerous speed makes motorized recreation incompatible with other recreation and conservation use, while the ability to travel long distances eats up large areas of public lands.

Ironically, the bad San Rafael Desert plan is one of 13 Utah travel plans that BLM was required to re-write after a court-ordered settlement found improper environ­mental review for G.W. Bush-era travel plans.

Laura Patterson, staff attorney at the Southern Utah Wilderness Alliance, commented, “At this point, the Trump Administration Bureau of Land Management has abandoned even the pretense of seeking balance in public land management.”

Overgrazing in the High Uintas

A study of grazing in the High Uintas Wilderness Area found that the U.S. Forest Service has vastly overestimated carrying capacity for domestic sheep.

Researchers from Wild Utah Project used Forest Service standards to construct a model, eliminating areas unsuitable for grazing, such as slopes of 45 degrees or more, wetland areas, areas with forage production under 200 lbs/acre and areas with dense forests. The study concluded that sheep grazing would have to be reduced by 90-97% in order to balance domestic sheep grazing with available forage.

Where does additional forage to support 12,850 ewe/lamb pairs of permitted sheep come from? It comes from degradation to soil and plants resulting in increased erosion and flood hazards and reduced food and habitat for native wildlife.

The High Uintas form a wildlife corridor that connects the Greater Yellowstone ecosystem with the Northern Rockies.

The Trump administration has proposed to open 4,231 acres for coal mining in Utah’s Book Cliffs on the edge of the Desolation Canyon Wilderness. The Williams Draw coal lease appears to be blatant government corruption to favor the Murray Energy Corporation headed by longtime Trump supporter Robert E. Murray.

Murray Energy filed for bankruptcy in October 2020, largely due to lower demand for coal as renewable energy has become less expensive. The Southern Utah Wilderness Alliance says it is highly questionable whether there is any economic justification for new public lands coal leasing.

The Obama Administration began a comprehensive review of the federal coal leasing program to determine whether taxpayers are getting a fair deal on coal royalties in light of the costs of environmental impacts. Under Trump’s “energy dominance” policy, the review was never completed and environmental concerns have never been addressed.

New Book Cliffs coal leasing would not only cause extensive landscape damage; mining would consume millions of gallons of water and burning the coal would release millions of pounds of greenhouse gas emissions.

Jeremy Nichols of WildEarth Guardians said, “This has nothing to do with energy, it’s a corrupt attempt to bail out a bankrupt coal company at the expense of public lands, the climate, and clean air and water.” The Green River in Desolation Canyon is a favorite place for river runners and is rich with archaeological sites.