A congressman once told me that Utah’s vast barren desert was an unappreciated economic asset. Everything we make, he said enthusiastically, involves some kind of toxic byproduct that has to be disposed of. – Chip Ward

A legislative audit of Utah’s Permanent Community Impact Funds released in May found that money is being misspent for industry subsidies and economic development instead of for the intended purpose to mitigate social disruption caused by boom-and-bust extractive industry.

The funds are collected as royalties on oil, gas and mineral extraction of federal public lands. Since local communities can’t collect property taxes on federal land, this money is supposed to help fund things like parks and recreation, public safety, sewage treatment, street lights and so on. The law does not allow using the money to help private businesses or to make low-interest loans to the private sector.

The auditors found that the Utah Community Impact Fund Board (CIB) has been handing out massive subsidies to fossil fuel industries. In 2019, CIB gave $27.9 million to the Seven County Infrastructure Coalition to plan for a Uintah Basin Rail Line intended to export Utah coal to Asia.

CIB also gave a total of $59.5 million to upgrade and pave the Seep Ridge Road in the Uinta Basin order to access oil and gas fields.

Likewise, $9 million was given for the Leland Bench Road, also to benefit the oil and gas industry.

Environmental groups have opposed these projects because government subsidies for fossil fuels prevent an energy transition to cleaner fuels.

On principle, community impact funds paid by industry should actually be used to help communities, not plowed back into industry. The fossil fuel handouts have an appearance of corruption, but the auditors blame it on lack of appropriate guidelines and note that “no CIB policy exists to assure projects adequately alleviate mineral extraction impacts.”

The Lisbon Valley Copper Mine that operates on federal and state lands in San Juan County went bankrupt in March, just a few months after announcing plans to extend the life of the mine by pumping sulfuric acid into the ground to dissolve copper ores.

The mine previously went bankrupt in 2008 when mine owners overestimated potential production and set prices too low.  The defunct mine was acquired by the current company in 2009. In March, mine employees were furloughed with no paycheck until the company can sell its assets to cover payroll. This time the bust was caused by the economic downturn related to the COVID-19 pandemic.

The closed mine left behind 380 million gallons of sulfuric acid. An emergency order for reclamation from the Utah Division of Oil, Gas and Mining  noted, “The failure of the pumps at the leech pads and ponds would result in a release of sulfuric acid into the environment after only 37 hours.”

In May, the Utah Inland Port Authority (UIPA) and Rocky Mountain Power signed a Joint Clean Energy Cooperation Statement for the industrialized area under development near the Salt Lake Inter­national Airport and Great Salt Lake.

As a first step, Rocky Mountain Power is preparing a 10-year power use forecast for the port area together with a forecast for renewable storage and generation forecast.

UPIA Executive Director Jack Hedge says the green power plan is meant to build trust and demonstrate a commitment to sustainability. However, it’s just as likely that the announcement is meant to greenwash a project that has had no environmental planning.

A Rocky Mountain Power news release about the deal quotes Hedge saying, “The market is driving to more sustainable practices and we must be at the forefront of that movement.” His reference to “market forces” is a red flag. As long as coal-fired power was cheap, Rocky Mountain Power failed to develop renewable infrastructure.

In 2015, HEAL Utah published a report titled Brown Sky: The Truth About How Rocky Mountain Power Spurns Renewable Energy that details how their “Blue Sky” program was based on buying renewable energy credits, not developing renewable energy infrastructure. Since then, some renewables have become cheaper than coal, but Rocky Mountain Power didn’t prepare for an energy transition. They don’t have infrastructure to supply renewable power because they never built it.

In any case, the clean energy agreement only addresses power supplied by the utility company. It doesn’t address pollution from increased  truck traffic to and from the Inland Port. 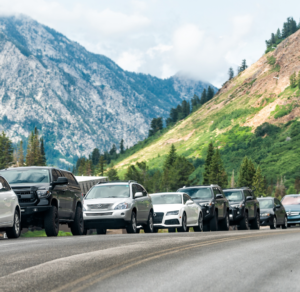 In May Utah Department of Transportation (UDOT) released updates on the Little Cottonwood Canyon Environmental Impact Statement (EIS) for the road from the intersection of State Route 190/Fort Union Boulevard to the town of Alta. The study addresses traffic, parking, transit use and avalanche control.

Along with proposals like tolls, more transit or reversible lanes, the revised planning document also says that the Draft EIS will consider a number of more exotic options to reduce canyon traffic congestion such as gondolas, light rail, sky train, and monorail. Planning documents offer a useful list of all proposals received during scoping, including ideas that are outside of the scope of UDOT planning.

Utah’s ski areas shut down abruptly in early March so it’s hard to evaluate whether any of these strategies worked. A Draft EIS with opportunity for public comment is due to be released in summer 2021.

The privately owned landfill is yet another toxic pollution threat on the shore of Great Salt Lake which is critical habitat for millions of migratory birds.

This article was originally published on June 1, 2020.