Wandering away from “home,” in its most basic sense, can get you into trouble. Create a sense of home, and you can learn to coexist with almost any environment.

On the Saturday after Thanksgiving, James Kim and his family left Portland, Oregon, to drive to their home in San Francisco. They could have gone straight down Interstate 5, an oceanic current that would have carried them south to the California Central Valley with hours and hours of are-we-there-yet traffic. Or they could have taken a cut over to coastal Highway 101, a much longer route of old logging towns, hobbit forests and windswept Pacific beaches before heading back inland in northern California. With his wife Kati and two young daughters Penelope and Sabine in his new Saab 9-2X station wagon, they looked forward to a enjoyable drive. They chose beauty over expediency.

Kim was a 21st-century man. Son of a wealthy aerospace company executive and internationalist, he excelled in science, music and sports. Like most men, he loved gadgets—but unlike most, he had his dream job of playing with them, co-hosting a weekly podcast for CNET’s gadget blog, and working as senior editor for MP3 and Digital Audio. He and Kati also had two retail shops in San Francisco—Doe, a boutique clothing store, and the Church Street Apothecary.

After turning off I-5 in southwest Oregon, the Kims stopped at a roadside restaurant and then began the drive over to the coast.  Night came early and snow began to fall. By 1:30 a.m., they knew they had taken the wrong turn-off. James tried to call for help, but reception lasted just a couple of seconds. Around 2 a.m., the car bogged down in snow. James ran the engine occasionally to keep the car warm throughout the long night. The next day brought more storms and early darkness. The day after, they ran out of gas. He began burning magazines, pieces of wood, and finally the car tires. The little food they had quickly ran out. Kati had been nursing her infant daughter and she began to breastfeed her older daughter as well.

Four days later, Kim’s co-workers filed a missing persons report, and search and rescue kicked in. Ultimately, eighty searchers on the ground in addition to three privately hired helicopters, a sheriff’s helicopter and an Oregon State Police airplane scoured the region—helped by the credit card he used at the restaurant stop and a tracing of the brief cell phone call. But the terrain was rough and the weather brutal.

Six days later at the car, the family had become desperate. According to their Oregon map, James and Kati figured, their distance to the town of Galice, was about four miles. They decided he should hike out.

Galice was 33 miles away.

Hypothermia is the most insidious of dangers. It is frightening. It is seductive. It is facing an alley thug after four Jaegermeisters. You know it’s serious but think you can get out of it. Shivering gets so bad people have broken teeth and bones. Then it gives way to numbness. The body tries to keep warm by doling out rations of heat from the core to the extremities.

But core warmth must be protected. Blood proteins and brain function in a tiny range of just 97 to 99 degrees Fahrenheit. Above that, and you slip into a delirium of fever. Below that, you become sluggish and judgment is impaired. Below 94, muscles no longer work properly. You stumble, thoughts drift, the body shivers uncontrollably in an attempt to build heat. Below 91, you can no longer speak and your memory fades. And then, when your core temperature reaches about 86 degrees, you find blessed, glorious relief. At this point, you may decide your clothes are an uncomfortable hindrance and strip naked. Walking has become almost impossible, so you stop to marvel at the beauty of the universe, and relax by sitting in a pool of ice water. People rescued at this stage sometimes strongly resist because they are experiencing complete euphoria. And then the heart slows and breathing stops.

On December 4, a helicopter pilot spotted tracks which led him to the car, almost hidden by snow. Kati and her girls were found alive. Two days later, James was found. He had hiked eleven miles on the snow-covered road in tennis shoes. Then, inexplicably, his tracks led off the road into Big Windy Creek drainage. Items of discarded clothing were found along his tracks into the canyon , five miles of bushwacking on a route so steep that even search and rescue barely made it.   They found him reclined in a foot of water in Big Windy Creek, as if he were in a Sausalito hot tub. The autopsy showed no injury.

When I first heard of this tragedy, I was puzzled.  Sitting in a car for six days? Hiking out in light clothing and tennis shoes? Starving? It didn’t make sense. I grew up on a farm in Canada, where the conditions Kim faced were approximately that of spring. Why didn’t he build a snow cave, comfortably lined with spruce boughs? Cars are cramped steel boxes with windows sucking away any warmth. Why not munch on the cambium underbark of the trees, and soft weeds under the snow? The northern forest floor is a thick duff with lots of fleshy roots and fungal filaments. Pine needles make a refreshing tea, high in vitamin C and even reputed to cure depression and allergies. With his tire iron, he could have overturned stones and found larvae and grubs—washed and roasted, they are nutty to the taste and very nutritious. They were in trees, surrounded by fuel. Dry wood is abundant under the outer branches. Three bonfires in a triangle is the international distress signal; the smoke during the day or the flames at night could be seen far away. But Kim’s home was San Francisco — a place so foreign to me that when I first went there I couldn’t figure out how to get on the bus.

All Canadian children learn in elementary school about the Franklin Expedition. In 1845, Sir John Franklin set out with 129 men in two ships to find the last 300 miles of unexplored Arctic coastline. His success would have secured the highly desired “northwest passage” — a route that would have tremendously shortened the distance from Europe to Asia, instead of the months-long trip around Africa or South America. It was a superbly equipped expedition, and Sir Franklin, a veteran of the battles of Trafalgar and New Orleans, was a highly respected commander.

The last heard from this great expedition was a sighting on Baffin Island. Two years later, Lady Franklin urged the Admiralty to send a search party. After dithering for a year, they finally began what was to become the greatest search effort in history, ultimately resulting in the loss of more ships and more deaths than Franklin’s expedition itself. The massive search took 14 years to discover what happened: The ships were ice-bound two years, supplies ran out, the remaining survivors decided to hike south, and everyone perished.

That, to me as a child, was not the interesting part of the Franklin Expedition. What I found fascinating is that at the same location where Franklin and company lost their lives was also the home of the Netsilik Inuit.   These people not only lived there, but they were happy and comfortable. To the Netsinlingmiut, as they called themselves, that region of the Arctic was far from an inhospitable environment. It was paradise.

That still continues to amaze me. How is it that one person’s hell is another’s heaven? What makes a home? Clearly, it is not a matter of climate and available foodstuffs. Franklin’s men froze to death while, unbeknownst to each other, the nearby Netsilik played games and danced and made love and basically partied all winter. Franklin’s men starved while the Netsilik gorged in a series of winter feasts that make our Christmas dinners look stingy. While Franklin’s eyes surveyed the barren wasteland in despair, what did the Netsilik see? It was the Netsilik who told the search parties about the location of the Franklin Expedition and showed them the artifacts they collected: wooden crates and brocade uniforms and Victorian china and silverware. Items as unsuitable to the Arctic as a fur coat in Florida.

Home. One of the oldest human words, and one of the first a child learns. When I think of home, I think of my kitchen, my bed, my family and friends and all the comfort and security of knowing I can take care of my needs.

Lost is quite the opposite. Lost doesn’t just mean you don’t know your location. Lost occurs when you no longer feel you are in control of your situation. Your environment is unpredictable. You are out of your element, and that makes you afraid. The greatest danger in being lost is not cold or heat or hunger or other threats. It is panic. Lost, most fundamentally, is a matter of not being home.

I think this resonates with Americans more than with most other nations. Everyone here is, or is descended from, immigrants. That includes the “native” Americans, whose ancestry here might go further back but who nonetheless arrived from somewhere else. Does it really matter whether your ancestors came from Ireland 100 years ago, a neighbor’s ancestors from Spain 500 hundred years ago, the Navaho from the Canadian Arctic, also about 500 years ago, or, for that matter, the Netsilik from Siberia about 1100 years ago? Americans move a lot, too, and that erodes a deep sense of home. It is estimated that the average American moves every three years. Some kids have lived in a half-dozen cities. To others in the world, this is astonishing, almost incomprehensible. But we take it in stride.

There is a peculiar flipside to the advantages of home. As wonderful as home is, it does not encourage adaptability. When you move a lot, you learn to blend in—to see the environment as the residents do. You get used to the new food, new dress, new habits, new ways to function efficiently. Those with a deep sense of home often do poorly at this.

It is a paradox. The more profound your feeling of being at home, the harder a time you have adjusting to being away from it. Australian aborigines are so integrated into their physical and spiritual environment that simply putting them in a jail 100 miles away may be fatal.  They literally die from homesickness.

James Kim was unusually fit, intelligent, and strong willed. All superb traits for survival. But his sense of home did not include a snowbound forest. He thrived in a world of television, which demands quick-witted spontaneous thinking and acting while baking under bright lights while being scrutinized by a million people—an environment that most of us would find terrifying.

How do we resolve this?  We work long and hard to build a sense of home, for ourselves and our community. But we also need to keep the ability, especially when away, to see the environment through other eyes. That is the key: to see our environment as home, to be at peace and feel that we belong. But at the same time, to be able to see through others’ eyes—and see their homes too. How wonderful to be able to see the Arctic like the Netsilik! Or the desert like the Bedouin, or the Grand Canyon like the Havasupai. Truly, home is not a location. It is a state of mind, and luckily, one that we can create.

Paul Gahlinger, M.D., Ph.D., is a local writer and adjunct professor of medicine at the University of Utah. 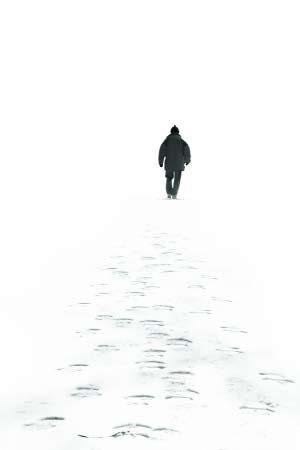