Menu
My Land, Your Land

A nature is about to give way to warehouses, a poet pays homage to the antelope, raptors and shorebirds whose habitat, the northwest quadrant of Salt Lake City, is scheduled for destruction

On Pioneer Day, I get up early and do what I have done for many years on this Utah holiday: I drive west, away from parades and firecrackers, out of the city, toward the Great Salt Lake. This year I do so with a dog, a puppy, and a purpose: to see the morning near the site of Salt Lake City’s proposed inland port in the Northwest Quadrant.

I take the exit to 72nd West as I do when I go to Lee’s Creek, the site of the old state park and the original Saltair resort, or Black Rock past the marina. This day, though, I stop where I see the signs advertising the development to come. The puppy rolls over my lap, and I let him down gently out the door by the roadside before releasing the Aussie from the hatchback.

In the field beyond, two pronghorns graze on the grasses among the brush. They regard our group but then bend down to eat. All my life, I have admired these animals, though it took nearly a third of my life before I saw one in the wild, not just a photograph or drawing. These mammals have a quiet dignity, their eyes shaped with black outline, suggesting concern for what they view before them, then, below their jaw, a black band followed by three white collars framing their necks. When pronghorns run, they can reach the old speed limit, 55 mph. Today, they do not run; they just lean down and eat. 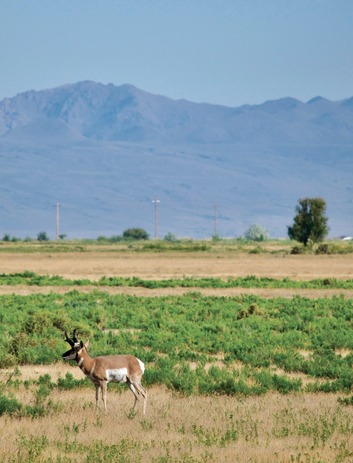 I’ve always enjoyed the fact that I can drive 20 minutes from my house and see wild pronghorns on the plains before the lake—in the distance, I see eight more. The dogs and I make our way farther down the frontage road where a 15-foot double-sided billboard towers over grasses: “Phase 1 Coming 2019: SLC Port, for Lease.” Just beyond the sign, another pronghorn grazes and down the road, a couple of dead cottonwoods rise above the rushes.

At the topmost branch of one of these trees, a Swainson’s hawk surveys the fields, considering hunger and what moves there that we cannot see. Behind the hawk in the far distance, Antelope Island floats its steps in the atmosphere, the clear marks of three ancient Bonneville shorelines, blue morning shadows against the tawny burn of midsummer. The hawk tolerates the presence of one human and two silly dogs for more moments than I expect, but then the raptor lets go his perch, catches wind, and glides away.

Last winter, near here, I watched a bald eagle pulling meat from its prey on the ice of a marsh. Today, in wetlands nearby, white-faced ibises on their skinny legs wade near snowy egrets whose wings are translucent white when they lift into the air. Black-masked stilts and avocets fly from pond to pond. By the roadside, red-winged blackbirds teeter atop the rushes, calling out as dragonflies hover.

The dogs roll in the hot weeds at my feet. Above them, sunflowers turn their tea plate faces east. Close-up, in the corona, a spiral of smaller flowers unwinds, coffee colored, gilded yellow, damp with pollen, seeds beginning to spin from their center. One bee, its thighs fat with the same yellow, wanders over the corona, tugging at the seed head.

By the time we get to the second pair of signs advertising for the port, a little bit before we reach the road for construction of the 4,000 bed prison even closer to the lake, it is already too hot. The dogs find shade in the tall grasses but then follow me as I begin the walk back to the car. A construction truck passes us and turns north onto the road to the future port past no trespassing signs. The workers in the cab of the truck view me and the dogs with indifference, no nod or wave.

Companies sometimes train truck drivers on this road, so I have seen plenty of that traffic here, but now I imagine what it will be like when the inland port is built. How many semi-trucks will it take to service the warehouses built over these grasslands, these wetlands? How many hundreds of trucks will travel these roads each day? How much pollution? How much noise?

Phase 1 coming in 2019! Along with trucks and more cargo planes, they will also make new routes for trains carrying shipping containers filled with goods to unload and store in the warehouses in this now “undeveloped” region. Of course, all this will mean rebuilding the roadway and railway. The port will increase traffic in this area tremendously. This once serene road that I walk down with my dogs will turn to a gridlock of trucks with trailers spewing diesel fumes that we will smell from Lee’s Creek to Saltair and Black Rock and back to West Valley and Rose Park.

Then, as we look back toward the city after watching the sun set over the Great Salt Lake, we will see first the prison and then all the structures of the inland port lighting the skyline and the headlights of semi-trucks on the road before we can attempt to see back through a haze, now even more dense, the city that benefits economically from this development but declines spiritually as progress devours our open spaces. Surely, one of the most important reasons we love to live in this valley is that the beauty of these open spaces sustains us, deepens us.

I suppose this writing is mostly an elegy; I cannot expect that those who believe in the primacy of progress will grieve with me over this blank land filling with something that brings more jobs to the state, more people, more money.

As I return to my car this last Pioneer Day among bobbing sunflowers and dragonflies, the pronghorns look like ghosts in the haze of the hot morning, and the shorebirds, ibises, avocets, ghosts. I wonder about the value of this open space, now for lease, this vision of Antelope Island, the silver-blue slip of the lake beneath it. I wonder what we lose when we allow developers to build over this space, bulldoze that cottonwood tree where the hawk was perched, chase the pronghorns and shorebirds away. Just considering all this, I feel my spirit diminished.