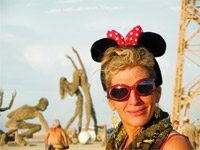 In the seven years that I've gone to Burning Man, the weeklong leave-no-trace artistic and social experiment in the Nevada desert, people often ask "why? Why do you keep going back?"

There's a long answer, for which I'm short on room. The short answer is: magic. It always seems to happen there. Here's one example:

On Saturday night, 50,000 people gathered in a huge circle in the center of which, as usual, was a wooden effigy of a man. The circle was clearly defined and rigorously maintained by Rangers-volunteer peacekeepers. About 500 fire performers, firekeeping personnel and other clearly authorized folks are allowed inside until the Man drops; then everyone rushes in, and the most amazing mayhem ensues.

This year I was separated from my cohorts-good luck finding anyone in a crowd that size. But there's a sense that we're all friends. We just may not have met yet.

I arrive at the circle early and score a spot in the very first row. To my left is a young woman, first-timer, from L.A. She, too, is alone, and clearly not at odds with the situation, odd as her situation is. Her veteran burner boyfriend, stressed out by the intense dust storms, had bailed on Thursday. She stayed on, undaunted. We have a long, gentle conversation as we wait for the ritual man-burning to begin.

On my right is a photographer and retired medical devices engineer from Phoenix. We, too, feel like old friends who just hadn't seen each other in a while.

Poi-spinners, stilt walkers, flaming dragons, sword dancers, blazing hula hoopers; fireworks; then the man catches fire. A commotion behind me grows nearer. In a flash a young man charges between me and the photographer, into the great circle. In a flash, a Ranger is on the case. The kid drops to his haunches directly in front of me. The Ranger is being a bit of a hardass, not excessive. Still. Something about this kid tells me he is DPW- that is, he is among the people who built Black Rock City. Department of Public Works. I am not alone in loving these people. The ones I know are heartfelt, crazy, sometimes a little cranky and usually not big on bullshit.

I do the right thing. I reach out and grab the kid's belt. "Just lie back," I instruct, and he tumbles, his head settling into my lap. He looks up and said, "Thank you, you are so kind."

Turns out he was indeed on the crew that helped build the man, and rebuild him after the first hapless burn.

From where we sit, it is a quiet burn. The Man was built of green wood, and will burn a long time. We speak quietly, or watch in silence, for a good while. In the course of conversation, I mention Salt Lake City.

He says he's from Chicago, a holistic healthcare practitioner (when not building Black Rock City). He had gone to massage school in Salt Lake City.

I ask if he'd ever read CATALYST while he lived here.

"Oh man, CATALYST saved my life," he says. He had come to Salt Lake knowing no one, and found his people in the pages of this magazine. I introduced myself.

In a crowd of 50,000 people from all over the country and beyond. In the dark. A stranger lands in your lap and says you'd once saved his life. Makes me smile. Makes me want to go back next year.

Makes me curious to see what kind of magic I might create today. Why wait?

Greta Belanger deJong is the founder, editor and publisher of CATALYST. Contact her at greta@catalystmagazine.net.