Friends in the kitchen; and other delights.
by Greta deJong 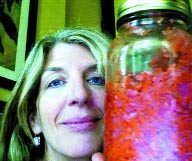 A few decades ago as a Midwest college kid on a tight budget, while Christmas present shopping for my nieces and nephews, I found a foreign grocery. Chocolate-covered ants, pickled whatnots, an assortment of then-bizarre and unusual fresh and canned fruit, the containers covered with exotic words and images. They loved it (though I don't think David ever did open his can of rattlesnake meat) and got a small dose, hard to come by in those days and that place, of a wider and more diverse world.

From Leonard Cohen's "tea and oranges that came all the way from China" to our favorite French wines, it has been a sign of culture to eat what the world offers. A global economy has made foods unknown to us in our childhood now easily available, and for a good price, too.

But in recent years I've come to appreciate, in a much deeper way than ever before, the beauty of "eating locally." It began, of all places, at the Bayou, where I would always order what to me was the best beer in the world, Unibroue Trois Pistoles, a strong dark Belgian ale. Okay, it comes from Canada, not Belgium. But I got to thinking about what's involved in hauling a glass bottle of (albeit deliciously) flavored water across a continent. How much of the $6 per bottle was going toward transportation? With local breweries making fine beers, could I come to prefer something else?

Now, when I order a beer, I always ask: "What have you got that's local?"

In the early days of CATALYST I was blessed (when the blackberries were on the move, I'd say cursed) with a yard that had every type of fruit tree as well as a 30 x 90-ft. vegetable garden. One summer when the office was in my home, I decided to eat, as much as possible, that which was no more than 20 minutes away from its mother (Earth). It was a weird diet for a few days-mostly I remember radishes. But it was an interesting experiment. I still recall the thrill of eating big black-red cherries directly from the low-hanging branches, and raiding the pea patch, or maybe it was beans.

If my nieces and nephews lived in this neck of the woods now (and two of them do-Kate and Polly, listen up!), I might bring them cheese from Drake Family Farm in West Jordan; lamb from Morgan Valley in Delta; our local and delicious Spotted Dog ice cream. I would tell them about the Eat Local Challenge, a project beginning August 18 instigated and organized by a casual coalition of local friends. It's becoming practically a movement. See Beth Carter's story in this issue. Read it and see what you think. Maybe you should join in, too.

Friends and food have always gone together. In June I experienced that in a new way when Adriane Colvin got together a group of people for a living foods demonstration and dinner party. With a living foods afficionado and neoshaman named Tasi, who was visiting Salt Lake for a few weeks, we gathered in David Allen's kitchen to learn the dietary benefits and culinary how-to of kimchee, a fermented food considered a national treasure in Korea.

Kimchee is supposedly loaded with nutrients and good for digestion. Tastes great, too, if you like salty tart flavors. We put our newfound knowledge to use, chopping head after head of Napa cabbage, a big bag of organic carrots, several large onions and a few heads of garlic, mixing it all with handsful of salt and a variety of spices. We took turns with the wooden pestle, pummeling the veggies till they (and we) were limp. Then we packed them tightly into jars, poured in enough of the salty liquid to cover, screwed the lids on loosely, and took them home to sit on our kitchen counters for the next six days.

Results were good. Other friends heard about the project. More recently, a couple of CATALYST columnists and other friends got together in Tony Guay's kitchen for Round Two of the Kimchee Chronicles. This time we added different spices and a bit of red cabbage. Nine-year-old Ally got in the act, too, tasting and pounding and authoritatively suggesting minor alterations to the seasoning.

This batch is now ready, and is even more beautiful than the first. I've been eating a few forkfuls of kimchee every day-a little bit goes a long way, but it's come to feel essential, like a hot dark drink in the morning.

What surprised us, besides the pleasure of an actual product, was the fun we had in making it: a joint project, visible results, quick completion time. Not unlike barn raisings, quilting bees and other domestic endeavors from days past. We think we're on to something. What next?

One thing that's next, though on a bit grander scale, is raising bees. We have one hive in its first year that we'll be writing about soon. Early signs indicate the lavender-dominant harvest will be plentiful. Lots of people have already expressed interest in our experience. We're eager to share, and help others get started for next season. More about that in a month or so.

It took our whacky Swami Beyondananda, aka Steve Bhaerman, to point out the obvious: If Bush and Cheney are impeached, we get to welcome President Nancy Pelosi. How cool is that? What are we waiting for?

Two new CATALYST columns debut this month: One is "Ask Your Mama," by Brooklyn-based ceremonialist Donna Henes. Longtime readers may remember her from "Celestially Auspicious Occasions," a column that appeared in CATALYST throughout the 1990s. We reconnected last year when Donna visited Salt Lake City on tour for her latest book, "The Queen of My Self."

We've also brought back "NewsNotes: Seen and Heard Around the City," after a long hiatus. Tamara Rowe, who also writes the Comings and Goings column, is tackling that one.

I hope you enjoy them, and the rest of the magazine as well.

Addendum to Carol Koleman's "Parcae: Triple Goddess of Fate" in this issue: A big thanks to Mike Reid for his assistance in this month's photo shoot.

And yes, Carol is the woman appearing, month after month, in all those myriad goddess guises (except, of course, in the months when Tony Guay writes; in which case we're looking at Tony). Carol does all the creative for those photos; we're always eager to see what she comes up with next.

Greta Belanger deJong is the founder, editor and publisher of CATALYST. Contact her at greta@catalystmagazine.net.