I like electricity. I respect it-and try not to abuse it. But it’s easy to take for granted something that’s always there, that never demands anything beyond your credit card number remaining in the right file.

For the last 90 years there has been a substation in my neighborhood-a sweet old brick building surrounded by a plain grey wall and expanse of grass. Through the years I have silently thanked the power company for inadvertently providing this space where all my dogs learned (or didn’t learn) to fetch. (Downside of a totally xeriscaped yard-no fetching at home.) Occasionally there would be kids. Other than that, no one paid it much attention. I was aware-and occasionally concerned-about the powerlines strung up my driveway and past my bedroom window. But as long as they weren’t humming, I was able to forget about it. 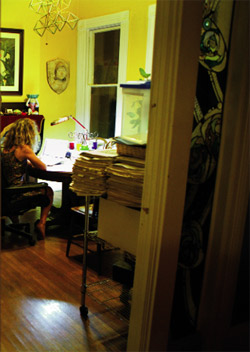 But in early January my neighbors and I learned the cute little building was being replaced by a much larger one, complete with 55-foot-high towers. Its output was going up, too: from 43 KW to 136 KW. I was curious. What was the electromagnetic field generated by my driveway powerlines now? And what would triple the capacity do? I live and work in the same space; those power­lines and I have a close relationship.

I borrowed Todd Mangum’s gaussmeter. Dr. Todd usually has it in his office, where he tests people’s cell phones and encourages them to use their speakerphone or other option to minimize head contact. I drove directly to the substation. The meter went directly to 15. I walked about 30 yards and the signal went down by half. A man who looked like he knew his way around this place was getting into a truck.

“Do you know what’s the legal limit on EMFs?” I asked. It was a rhetorical question. I know that in the U.S. electromagnetic frequencies are not regulated, unlike other parts of the world.

He responded, accurately, “Depends. It’s 2, if you live in Scandinavia.”

“Why do you think it’s so different here?” I mused.

“Because we’re Americans,” he said. “We need it all, now.” This is a wise man, I thought to myself. I remembered towns in Guate­ma­la, and in Cuba, where brownouts were a part of life.

But wait. Yes, we consume. So do Scandinavians. How do they keep their EMFs down to 2?

Every day a dozen stories come through my email about new technologies that are proving themselves. Many U.S. cities are supplied by substations that take up a smaller footprint, are shorter, that kick out far fewer EMFs and produce more power than what Rocky Mountain is planning for our old, residential neighborhood.

I walked around for a few days, fascinated. I discovered that the numbers from those powerlines varied, depending on the hour. Where I lie in my bed, upon waking, I get a reading of 15 (“caution”). A boombox, turned off, still gave an extreme reading. I figured out that EMFs are not necessarily related to electrical consumption: It’s the transformers: the brick on my computer, the boxy plug on those decorative LEDs in the bathroom.

And that substation will be, essentially, one giant transformer, if Rocky Mountain Power proceeds “the American way.”

Neighbors are gathering, discussing, educating themselves. We’ll see where this goes. To be continued.

Greta Belanger deJong is the editor and publisher of CATALYST. greta@catalystmagazine.net