It’s funny how, arising each day, we really have no clue what adventures will unfold. (“Adventure” is a good word to cover any out-of-the-ordinary chain of events, whatever the interpretation.) More stunning is when the action waits to start after the day seems done.

Like last Monday, August 24. In the afternoon I_met with my friend Garrett, who would be caring for my animals while I went out of town for a week. Misha, my sweet 17-year-old kitty, had apparently decided it was time to leave her body in the past week. The weight melted off her once muscular body, practically overnight. To pick her up was picking up a whisper of her former self. I tried various foods to entice her to eat. She gobbled up the sockeye wild salmon one day… then returned to sniffing and dismissing my offers. She had usually slept on my bed, though not always. One night I’d found her curled up under the bed, too weak to jump up. Just that morning, around 5:30am, I heard her loud meow. She was downstairs in the CATALYST office. I picked her up, cradled her like a baby. She did not purr, but felt relaxed in my arms. 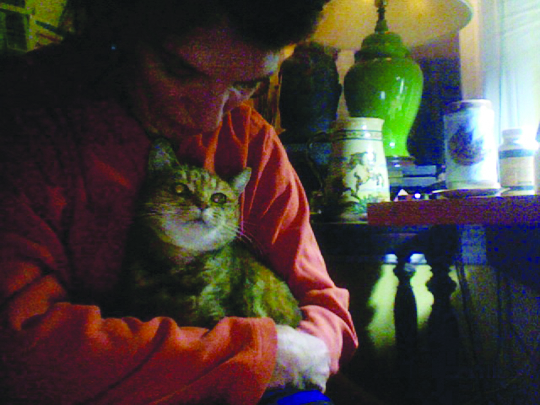 Now she sat in the middle of the garden, thin, still as a lawn ornament. It was her kingdom. Occasionally she ventured up or down the street, rarely across. When the dogs were younger and could walk better, she would accompany us to the corner, skulking along the gutter from car to car like in The Pink Panther. I told Garrett I would likely put her down at the end of the week.

It felt odd to say. Though I have nursed many a geriatric pet through its last days, I had never euthanized any of them. But I did not want to have Misha die without me.

That night Jean Arnold and I went off to see “Hu_manity Ascending,” the documentary featuring Barbara Marx Hubbard, which was screening at All Saints Episcopal Church. A thought-provoking 40 minutes. That is another story, and you’ll hear a lot about it later.

As we were driving home, digesting what we’d just learned, my phone rang: About 45 minutes earlier, Todd Mangum, a close friend (and occasional CATALYST writer) who lives in the neighborhood, had witnessed a cat hit by a truck a block from my house. He was driving on First South and saw the cat enter the crosswalk and stop. The tires of the dump truck in the lane to his left landed a clean blow to the cat’s head. It was too dark to make a positive identification, but he felt it was Misha. He bundled the little body and brought it to my house. A cat was in a plastic bag on my garbage can at home. (Not decorous, but safe.) It might be my cat.

It didn’t make sense. She never goes that far. Besides, I doubted she would have the strength.

Jean stayed with me; we crept up the driveway to the still package. I hefted the bag. Too heavy…. With such deep reluctance I aimed my keychain flashlight into the Smith’s Marketplace bag, away from the head. I saw a tail and backbone more familiar than the nape of my own neck. My Misha.

About 17 years ago, co-CAT founder Victoria Fugit found her, pregnant and wild, in Olympus Cove. We met briefly, I named her, and she was whisked off to a vet. When I retrieved her, she was no longer pregnant, but still wild. For our first few years together, she laid low, often emerging only at night to curl next to me-but not too close-on the bed. She had a clear preference for luxury, as cats do, seeking out the smoothest fabrics, the cushiest pillows, the best view. The fuchsia satin pillowcase was her fave. Over time she became more visible, developing a penchant for inboxes and keyboards. In her later years, she developed a purr that melted my heart every time I heard it. Which was whenever she was still.

On her watch, at this house, five dogs grew old and died. She supervised the transformation of lawn to various gardens, weathered a divorce, and always expressed her desires clearly. Cubby, her cohort for most of those years (we could never remember who was older), had faded away in March. She was my constant companion after that. My little shadow.

As the day began, it ended: me cradling her body in my arms. We walked up and down the street. A strange, strange sound from high above: an owl at the top of the neighbors’ sycamore, the same tree we’d found a screech owl beneath, 20 or so years ago-the only sign of owl I’ve ever noticed on this street.

I held her, in awe of what had happened: the odds of her doing what she did; the odds of Todd witnessing it and delivering her still-warm body to me; the owl. The mystery.

I wish I could say that was, indeed, the end of the day’s adventure; that I went to bed, mourned the loss of my kitty, sat with the presence that remained. But that is not the case. In fact, that was only the beginning. Keith and Sarah showed up, bearing tequila, with which we toasted a cat’s life well lived and marveled through the sadness.

And then, with the flick of a tail, another adventure began-or is it a continuation? Scary, hilarious, problematic: What revealed itself later that evening is still unfolding. That is a completely different (though not unrelated) story.

I will say that around 5:30am the next morning, I awoke out of a deep, sound sleep to the sound of her plaintive, loud meow. I sat up in bed, listening, confused. I knew it was Misha in that bag. I thought it was Misha…. I went downstairs and looked around the office, but no Misha. Her body was safely installed on the second level of John’s 30-ft. art project in the driveway.

It is an honor to be one cat’s person for all those years. Good bye, Shmee, my sweet Misha. Good bye, good bye.

Greta Belanger Dejong is editor and publisher of CATALYST.