April 2 is the birthday of my big brother, Jerome D. Belanger. April is also the month in which CATALYST first appeared 30 years ago. There is a connection. A serious one. I would not be doing what I do today were it not for Jerry (or Jd, as he calls himself these days.) Jerry is the author of many books on self-sufficient living including two in the “Com­plete Idiot’s Guide” series, and a beautiful novel, The Place Called Attar. 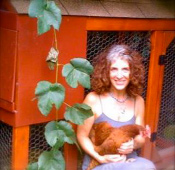 In high school Jerry read books, raised rabbits, ran track, and adored his baby sister. While in the Marines, stationed in Hawaii, he introduced me to exotic music. Still in college, he started a magazine; my parents’ root cellar became the darkroom and I got my first taste of the publishing world. He read the Rosicrucian Digest, which I thought was the most mysterious thing in the world. During Vietnam, when I was in the 6th grade he donated some bucks to the Stu­dent Nonviolent Coordi­nating Commit­tee in my name (he went to UW-Madison, as did I, eventually), probably making me the youngest American with an FBI file.

When I was in high school, he put a photo of me, holding a kid goat, on the cover of his new magazine, Countryside. That cover appeared in the first issue of the Whole Earth Catalog; even then, that felt prophetic. I was definitely not going to spend my life working for the phone company.

When I was in college, he let me work at the magazine. I graduated and he gave me my first job. Nepotism? I like to think I’d been years in training.

I’d grown up gardening but my few years working with Jerry in the mid-70s were life-changing. I learned volumes about gardening. I learned about soil science, food preservation, nutrition, natural healthcare, alternative energy and a lot about small livestock diseases. I learned to write. I found my voice.

He’s retired now. We rarely see each other or talk. But I thank him every day. Philo­soph­ically and practically, CATALYST would not exist without Jerry. Who’d think a guy who lives and gardens on the edge of the Chequamegon National Forest in central Wisconsin could have a meaningful impact on the state of Utah?

He was a man ahead of his time, and I’m glad I was there to be inspired.

This article was originally published on March 30, 2012.