Editor’s Notebook: A Car, a Bike, and Two Sturdy Legs

-by Greta Belanger deJong On Monday morning, May 7, my car was stolen from my driveway. A quiet neighborhood, near the University. Who would think to steal a 20-year-old Saab? And "why me?"

That's an interesting question that I'll contemplate tomorrow, after we go to press. The truth is, I'd been riding my bike so much that I didn't even notice my car was gone until someone pointed it out to me.

Maybe I've anthropomorphized my car enough that it's acquired a mind and will of its own: If it wants to take itself on a little vacation, so be it. But it's over three weeks, now. I really need to make a CostCo run. Besides, the dogs are jonesing for a hike in the foothills. And they'd really like their retractable leashes back.

Or maybe it has to do with the Universe dealing me a relatively gentle lesson in loss. No dead bodies, no blood, all limbs still accounted for.

Of course, I still half-hope to look out the window one morning and see her back in the driveway. Maybe with a note of apology taped to the steering wheel, and a full tank of gas.

While of course I'm annoyed at my car's disappearance, and wouldn't mind dumping a week's worth of fresh dog turds in the thief's bed, should he ever be found, in the meantime I'm having a blast riding my bike. On the night of May 19 I rode to the Pedal Pushers Film Festival at the Depot, where dozens of others had also ridden their bikes -no parking problems that night. Afterward, a swarm of guys, not the Lycra crowd, hopped on their single-speed bikes and flew down South Temple en mass. A beautiful sight. My friend Keith, who owns six bikes (which is to say he is a pretty hard-core athlete and gearhead) speedily guided me through the ins and outs of urban night-riding as we zipped through and around traffic, to places it seemed appropriate to visit by bike in the night: the amateur burlesque show and bake sale at Bar Deluxe, the curb of the State Street Chevron station where we ate microwaved burritos and watched the "real" bikers, to the highlight of the evening, my first visit to the Republican, an Irish pub with a loaded bike rack inside. Ours made 10. Not that I could lift my heavy old bike onto the overhead rack.

I love my bike, a red Specialized with streamers, a bell and a blue crate on the rear. It was a gift from a whole bunch of friends about 10 years ago. It serves me well, daily.

I was content until this past Saturday, when Pax suggested we drop by Wasatch Touring to test ride a new-style road bike he saw in the window.  Sure, why not?

I rode this new bike east on First South, the same route I take at least once a day. It moved twice as fast, with half the effort.

Now, when I climb onto my own serviceable bike, it seems… old. It has made me stronger, without my even noticing. (You should feel my thighs.) But will I be able to resist the siren call of this new toy (which also happens to be red, and a Specialized)?

Ah. That's just it. Since my car was stolen, I can fake a serious look and say we're now talking not about toys, but about transportation. And $500 for a new bike sure beats any car payment.

Do you ever find yourself saying and thinking one thing… and, before you know it, doing something else?

I need a week of simple peace and solitude, I said. Torrey? Boulder, Utah? Within a week, I was on a plane to Honduras. What? I didn't even know where Honduras was. 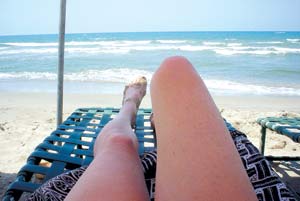 A week in the town of Tela, on the Caribbean, in a $13.50/night room, private bath with hot shower if you're clever enough to get it to work. Nary another American in sight. The type of solitude I'd had in mind was not on the agenda, except for one afternoon in a cabana on the beach, pictured here. I rented a mountain bike and spent an adventurous day in the Lancetilla Botanical Garden, which is far more rugged (and, apparently, dangerous) than its genteel name allows; twice, got caught up in parades around the town square -something to do with "municipal corruption"; and was awakened at 4:54 a.m. by a man with a bullhorn beneath my window, accompanied by a drum- as I speak no Spanish, I had no idea what he was enthusing about. It was a delightful, if unexpected, week.

Sitting in the sun, on a rock, maybe by water, still sounds good-and necessary. One joy of living in a place like Salt Lake City: I can bike to it.

Greta Belanger deJong is the editor and publisher of CATALYST. greta@catalystmagazine.net.