The Accidental Rooster; What’s That on the Ceiling?; Malia; Love CATALYST, Give CATALYST.
—by Greta Belanger deJong

I have a rooster. He’s a simple-looking little guy, a mostly white Bantam. His cock-a-doodle-doo is not at all the signature rooster call; it’s more the off-key plea of a morose squeaky toy. And loud. Really loud.

I keep waiting for a neighbor to complain. I bait them: “Don’t you find my rooster annoying?” They are illegal, you know. No one bites. “I never hear him,” says one. “He’s no worse than the neighbor dogs,” says another. For my own sanity, at least on weekends, I sneak out to the coop in the night and nab him, and he spends the night in a cat carrier in my basement laundry room, which dampens the sound enough so he does not wake the dead.

Cock-ee (as I call him) may irritate me, but Cloud, my large grey Cochin (that’s a breed of ridiculously fluffy chicken) finds him tolerable. At least, he’s disrupted her shyness, which turned to depression when her older sisters died last year. Well, maybe she, too, finds him a bit overwrought. But he gets her out of bed in the morning. She does seem more interested in life. And so, for now at least, I keep him.

What’s that on the ceiling?

Last year I asked occasional columnist (“Healthy Sexy”) Nicole deVaney to write about making ginger beer (aka ginger ale). In January I made a batch myself. It’s ridiculously easy: http://bit.ly/1OAHcNb

I must have a particularly active ginger “bug”—the starter that catalyzes the probiotic brew. In this cooler-than-average house, instead of the recommended five-six days, my brew, which I keep in flip-top Groelsh pint bottles, is drinkable in 24 hours.

On this last batch, I waited two days, just to see what difference it made. When I gently opened the first bottle, the contents literally exploded: ginger beer on the ceiling, on the walls, on me—everywhere. Two cups of aerosolized soda can cover a lot of ground.

I don’t think I’ve ever concocted anything that ended up on the ceiling before, except for that time a few decades back when Brian Barnard, the civil rights attorney and bon vivant, came by to give me martini-making instructions and Polly (now our art director, but at the time an early-20s slip of a girl) had some rather rubbery strawberry Jell-O some of which, after a few “lessons,” ended up on the ceiling. It became a conversation piece, and the Jell-O remained in place for a very long time.

Ginger beer on the ceiling looks more like the results of years of chain-smoking. Though it smells a whole lot better…. 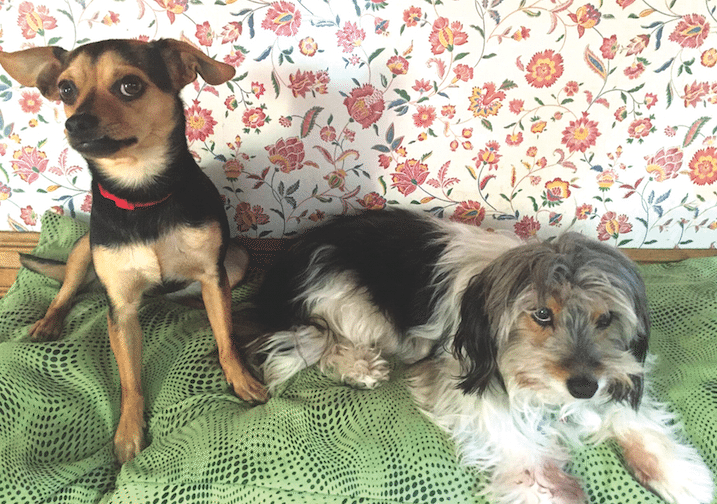 One day recently my car, while heading north on 11th East, careened into the Best Friends boutique. I walked out with a small black-and-brown dog, lithe and intelligent. I named her Malia.

A stray wandering the streets of West Valley City, this girl was unfixed when found and appears to have been previously pregnant. She seemed respectful of Greg, an old and timid Chinese crested powderpuff.

Malia, it turns out, was not housebroken. We tried “sit” in various languages and nothing worked. At 10.8 lbs., she can almost look me in the eye when she leaps. She terrorizes the cat, who weighs more than she does, and has weaseled her way into the chicken run. She barks maniacally at any passerby. She’s a climber too, I’ve found her standing in the middle of the dining room table.

Still, she makes me smile. Yes, we will find ourselves a trainer. As it turns out, Greg isn’t all that into her. But I am. Her favorite place is my lap. In the house, she comes when she’s called. She likes my cooking. She can sit on command, now, too. We will find a way.

You may have heard: CATALYST is going nonprofit. That means we get to participate in the Community Foun­dation’s “Love UT Give UT” campaign. While the big day of giving is March 31, your tax-deductible contributions will be accepted all month long. If you love us, here are some ways you can show us.

• Go to LoveUTGiveUT.razoo.com and click on CATALYST in the “community” category.

• Sign up for the CATALYST Weekly Reader, arriving by email every Thursday. You’ll find highlighted events for the coming week, a note from me, thoughts from other CAT staffers and everybody’s favorite, Ralfee Finn’s “Aquarium Age.” Go to CatalystMagazine.net.

Greta Belanger deJong is editor and publisher of CATALYST. Greta@CatalystMagazine.net. 801.363.1505.

This article was originally published on March 1, 2016.