On a vast expanse of the northern New Mexico desert, just outside of Taos, lies a housing development like no other. Actually, “development” isn’t quite the word to use here as it implies an inherent conquest of the planet. No, here at the Greater World Community the homes seem not to be “built” but rather to be coaxed out of the earth, comfort cultivated from clay soils. This is the desert where the “Earthship” was born.

I’ve been a huge fan of earthship architecture since first being introduced to the concept in 2002. A human in outer space requires a vessel that meets all of the needs of its inhabitants; why should our homes on earth be any different?

I recently had the pleasure of visiting the Greater World Community, the home of Earthship Biotecture. I spent three days basking in the comfort of these unique buildings, studying their design, and touring a number of different units. My view of what is possible with home design will never be the same.

Conceived by architect Michael Reynolds several decades ago, the first earthship was built in 1979. Over 2,000 currently exist around the world. A truly sustainable home built from a combination of salvaged and natural materials, it is designed to be completely off grid and autonomous while meeting every basic need of its inhabitants. Power, water, food, waste processing, beauty and comfort are are all provided by the earthship itself—exactly the opposite of how the typical American home functions. And although built from “garbage,” every home we toured was a striking work of art, where no opportunity for creative expression and beauty was missed. 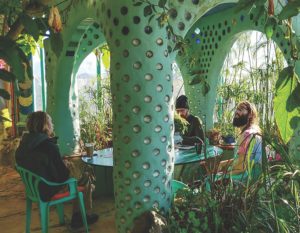 What makes an earthship?

Several key features and design elements are the hallmark of this type of design and how they relate to human needs. The first is comfort, and this is achieved by the earthship being a high-thermal-mass passive solar building. By orienting buildings in our region so that the south-facing wall is glass, and the remaining walls are built from materials with high thermal mass, a well-designed building is capable of maintaining a comfortable living temperature year round with no mechanical heating or cooling. To experience this phenomenon is nothing short of amazing.

When we arrived at the Phoenix Earthship, the crown jewel of earthship architecture, it was a frigid and windy 15-degree evening. We stepped through the front door and were immediately embraced by warm air. A mature kumquat tree loaded with citrus towered 25 feet overhead, and we were transported into a tropical oasis.

These passive solar structures are able to maintain a comfortable living temperature year round because the high mass of the walls are able to moderate temperature fluctuations, a technique used in the desert southwest for well over 1,000 years. The southern wall of glass creates a greenhouse effect, capturing heat from the low winter sun or deflecting the hot summer sun when it moves higher in the sky.  Operable skylights and well-placed ventilation ducts provide fresh air and cooling, utilizing natural convection. 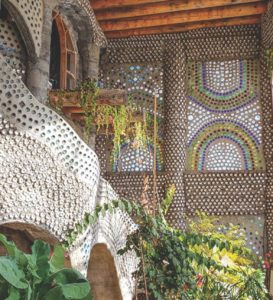 A feature unique to earthship construction is the process of creating the massive walls of the structure by ramming earth into old tires, in essence creating monstrous adobe brick walls that are fire- and earthquake-proof as well as impervious to insects and rodents.  Other walls utilize “bottle bricks” made of glass bottles or cans and mortared with adobe or concrete. These walls are then finish-plastered and can be made to look indistinguishable from the classic adobe buildings of the southwest.

However, most earthship builders tend to embrace the art and flair of exposed glass and aluminum details, a celebration of the highest level of solutionism: building housing while working to solve our garbage crisis.

The southern face of glass creates a greenhouse which becomes an integrated part of the living space, and providing for another human need: food. Tomatoes, greens, kale and other vegetables nestled beneath a canopy of citrus and bananas in our earthship. Fish and frogs swam in the small pond, and even a few birds were members of the indoor ecosystem.  The integrated plantings also helped to regulate humidity, clean the air, and create an unparalleled feeling of comfort. All of the plantings in the greenhouse are fed by the systems that meet our third and fourth needs: water and waste processing.

The earthship collects all of the water needed for its inhabitants from rainwater, and stores it in underground cisterns. These cisterns also contribute to the thermal mass of the structure.   This harvested rainwater is often used four times in an earthship. After initial use in sinks or the shower, the used “greywater” then drains into the planting beds in the greenhouse area of the earth ship. The microbes in the soil and the plants themselves clean and utilize this water as it travels through the network of planting beds, before being collected in a lower sump where it is either circulated back through the beds or used to fill toilet tanks for flushing. “Blackwater,” or water from the toilet, gets processed on site through a modified septic system that overflows into outdoor grow modules to support trees, which provide shade. These grow modules are an improvement that replaces traditional leach fields, which tend to grow only grass and weeds.

Most earthships utilize solar arrays to provide electricity for their inhabitants, often with small wind turbines as well. Hot water is, of course,  provided by the sun as well. The earthship design process includes a serious consideration for “designing down,” the process by which careful consideration and attention are given to reducing the need for electricity and complicated systems in the first place, which saves money and time during construction. Extensive operable skylights and light-colored walls at the back of the building provide natural daylight, reducing the need for daytime lighting or mechanical ventilation.

The decision to run the washing machine or dishwasher only during daylight hours drastically reduces the size of the battery bank the home requires. Dropping the dishwasher and embracing the meditation of cleaning one’s own dishes takes this concept one step further.

The final morning of my stay in the Phoenix earthship, a blanket of snow covered the ground outside. I stood beneath a canopy of pomegranates and passion fruit, and took a shower of pure rainwater heated by the sun.  The water leaving the shower drained into a network of pipes where roots eagerly waited to receive it.

After my shower I went to the couch to enjoy a coffee, then noticed kale growing within arm’s length of where I sat. I harvested some, and sautéd it with fresh eggs from the chickens outside (who had their own mini-earthship as well, the “Chicken Hilton”). It was in that moment I truly realized the full power and brilliance of what Michael Reynolds and his team pioneered.

James Loomis is a fulltime urban farmer, educator and permaculture hooligan. His bloody Marys are a thing of legend, and have been known to change the entire course of a weekend. To learn more about Michael Reynolds and his pioneering battle with the permitting process, watch Garbage Warrior, available at www.garbagewarrior.com/

This article was originally published on February 28, 2019.