Dressing our flaws in beautiful penmanship 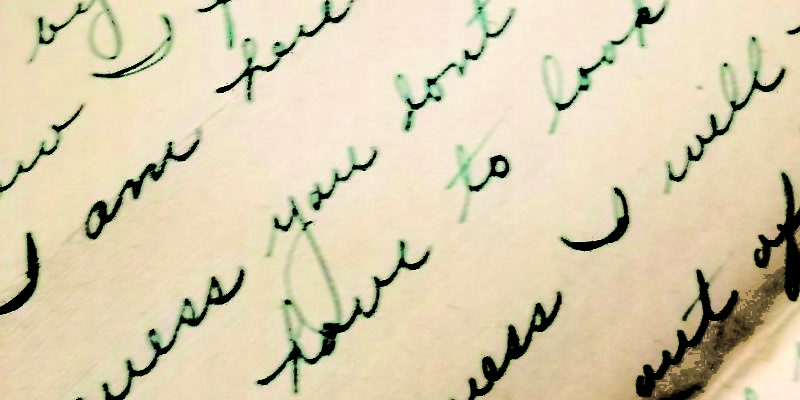 I  have always taken for granted that I can transfer things from my brain box down through my fingers, onto a keyboard and off onto some electronic location.

In the old days, I was a prolific paper letter writer. I’ve had to learn that some people just cannot or will not write. I used to take it personally, as if textually silent friends and relatives were writing novellas to other people while limiting me to “best wishes” and Hallmark-generated sentiments.

Sentiments sometimes conflict with the presentation. My grandfather Victor was a gruff old Midwestern racist who tortured my father with sarcasm much the way my father tortured me with sarcasm and much the way I now torture readers with sarcasm. It’s a Hinkamp tradition. How racist was granddad? He refused a free military funeral because he didn’t want to be dead in the same soil as dead black people.

When he was long gone and my last parent died, I had the monumental task of sorting through their entire house and 50 years of accumulated debris. One of the few second-generation items I kept was a stack of World War II letters from my grandfather Vic to my grandmother Helen. Some of them appeared unopened. Six months ago I started going through them.

Although he was a real life knife-wielding butcher, Vic was not a butcher with the pen. This jumble of letters, emanating from several boot camp locations in the United States to places where he was only allowed to write “somewhere in France,” showed that whatever schooling he had must have emphasized penmanship. Though his words were still that of a gruff, racist second-generation German immigrant, they were exquisitely written in cursive with an ink pen on unlined paper. Most were written either in a tent or barracks. I can hardly write anything with a pen, much less on unlined paper, and I’m lost without cut and paste, spell check, the delete key and a kind editor.

…Honey, I think I will be home again in the near future, I hope….. So be as good as you can be and take good care of the kids…. P.S Can’t write x’s for kisses, the censor won’t allow it.

I didn’t go to church services today as it was held by some negro clergymen and you know how I feel about those black bastards.

Dennis Hinkamp would like to remind you that we are all flawed. Be kinder than necessary.