Menu
Don’t Get Me Started

Don’t Get Me Started: Show Trial

Tim DeChristopher vs. the Juggernaut.

United we stand,” so the slogan goes. But the essence of democracy is “Divided we stand”: a society where all points of view are valued, where dissenters are welcome.

Last month, when 29-year-old Salt Laker Tim DeChristopher was convicted of trying to slow down our mad rush to spend our children’s inheritance, he was sentenced for exercising his right to free speech.

U.S. District Judge Dee Benson chided DeChristopher for his outspokenness about the need for resistance to the juggernaut, saying that he could have avoided prison time if he had not defended his actions and called on others to defy the illegal actions of the Bush administration—actions that an “executive-supremacist” like Judge Benson would surely classify as protected by “executive privilege.”

In essence, this means the executive (governor, president, CEO) can do whatever he wants, with no checks and balances, no due process. The executive, or one of his trusted henchpeople, decides it’s in someone’s interest (guess whose?) to do something and it’s done. What better gift to the oil and gas industry than a bunch of sweet oil and gas deals from Uncle Sugar and the departing Bush administration?

No small part of the ”executive-supremacist” point of view is the assumed ability to change rules to suit the purpose. “We’re not here about why he did it,” Judge Benson said at one point during the trial. “We’re here about whether he did it.”

So Judge Benson allowed the jury to hear nothing about why DeChristopher thinks we’re headed the wrong direction. But come sentencing time it was all about why he did it, not what a harmless act it really was. No sand or sugar was poured into the fuel tanks of bulldozers. No trees were spiked. But it seems Tim’s words were more dangerous than any such acts. 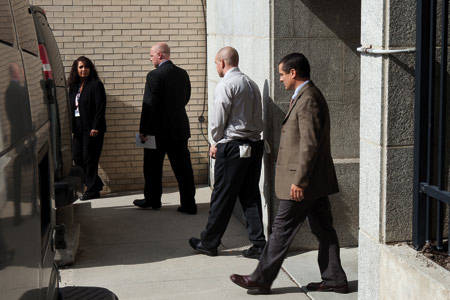 What kind of illegal actions are Judge Benson and the federal prosecutor encouraging when they refuse to pursue charges against the Bush administration lackeys in the Bureau of Land Management that conducted the illegal auction?

Perhaps Judge Benson could suggest some reading materials so DeChristopher can figure out the legal way to protest illegal government actions while he’s in prison.

Speaking of sweet deals for the oil and gas industry: The Justice Department recently announced a $3.4 billion settlement against the U.S. in favor of nearly all of the Indian tribes in America.

For 100 years the U. S. government, for the benefit of the oil and gas industry, has failed to collect, or has misspent, oil and gas royalties from wells drilled on Indian land. The Indian tribes claimed $100 billion in unpaid royalties. Money to send some of Chief Seattle’s descendents to Harvard went instead to the balance sheet of Standard Oil of Ohio, or some Cadillac cowboy with a really good government job—giving away this country’s gifts from mother nature.

Speaking of Harvard—guess where George W. Bush was when he was 29?

John deJong  is the associate publisher of CATALYST.

This article was originally published on July 29, 2011.