The future of mass transit along the Wasatch Front. 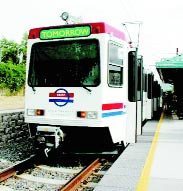 Recently, while moving my studio to the new Poor Yorick space at 126 West Crystal Avenue (2590 South) I came across a story I wrote eight years ago about the future of mass transit along the Wasatch Front. It included a detailed $15 billion proposal for light rail including a map. In the interests of maximizing my time at my studio preparing for a show at the Coffee Garden on March 15 and Poor Yorick's semi-annual open studio on March 30, I am updating and reprinting that story.

While the problems associated with air pollution were enough to adopt a massive transit future for the Wasatch Front in 1999 the realities of peak oil make it imperative in 2007! Eight years later Envision Utah is still in business working on a growth vision by committee – guaranteed to please or offend no one. And the Legislature has set off on a course that will please no one but the Utah Department of Roads and the construction industry.

Much has been made of Envision Utah's growth scenarios and their important role in educating us to the complexities of planning: vehicle miles traveled. Infrastructure costs per new resident. Density figures. Zoning requirements. The limits to growth are implicit in the scenarios, if you look for them.

The biggest component of any growth scenario is transportation. How will that many more people get to work, school or play?

Two of the scenarios envision massive highway construction to build our way out of traffic congestion, spending tens of billions of dollars on roads that will eat up the last open spaces to accommodate cars that will pollute the last breathable air (while they guzzle the last available oil). The other two scenarios project highway construction at about the present rate. None of the scenarios adequately address the problem of air quality.

Will we have enough clean air for several million more people and the cars they expect to drive? Peak Oil tells us we won't have the gas to drive on the last roads built.

While we live downwind of one of the largest, least polluted airsheds in the nation-northern Nevada and southeastern Oregon-our weather patterns don't always bring that air to us when we need it. The basins and ranges that characterize the geography along the Wasatch Front frequently trap pollution in the basins for days or weeks. Imagine what it will be like during a typical winter inversion with two-and-a-half times as much pollution.

Only one scenario projects spending more than a pittance on mass transit and it only projects $5 billion over 20 years. But what would the Wasatch Front be like in 20 years if we went for a truly massive transit program?

Imagine, if you will, a future where families like yours and mine can survive with only one car, or maybe none at all. What would such a city look like?

•    Businesses are situated to encourage walking and mass transit access.

•    Delivery services, using mass transit, make shopping by phone or Internet practical for most of our daily shopping activities, including restaurant delivery services.

•    School and church parking lots are freed up to build parks and playing fields convenient to schools and homes.

•    We aren't dependent on the whims of the weather as to whether we'll have fresh air to breathe or we'll suck on exhaust pipes for another week.

•    There's a sports utility vehicle in every garage, used only for sports utility excursions-ski trips, vacations, driving on snowy days and family outings. Also in the garage is a Zero-Emission vehicle for those days you really need to drive, and a couple of bikes or mopeds.

•    The massive transit system is named after the politician who had the vision and determination to set us on a path to a sustainable, livable future. It's a legacy to be proud of.

•    Currently the state spends $50 million a year to run and maintain its school bus fleet that only runs twice a day. A massive transit system allows this money to be put toward education instead of transportation.

•    Light rail lines are located along large concentrations of dwellings and jobs.

Too costly? Achieving such a future would take a commitment akin to the money that has been funneled into highways in the past. The state of Utah currently spends about three quarters of a billion dollars a year on highways – one out of every eight dollars the state spends altogether. This is a combination of federal gas tax funds, state gas tax funds, state sales tax funds and borrowing.

The exact route of any of these proposed lines will be a matter of no small amount of debate. A good solution would be to put it on publicly owned rights-of- way. Old State Street, running through most of the densest parts of the Wasatch Front, would make an excellent route down through Utah County. North of Bountiful, the Leavitt Lakeshore Line could follow the old Rio Grande right-of-way running about a mile west of I-15. The land savings would be in the tens of square miles.

Much has to change to make this future a reality, not the least of which is our love affair with the gas auto.

Half a century of planning and building have yielded an urban landscape where only a minority of people live within easy walking distance of the goods and services they need.

The average car costs thousands of dollars a year to operate, with car payments, repairs, insurance, property taxes and fuel. Add to that sales-tax dollars and money borrowed against future tax revenue to pay for highway construction.

Sounds great; but how much will it cost?

A truly massive transit system could be put in place for $10-15 billion. The chart and maps [www.stoplegacyhighway.org] show the costs and routes for potential light rail lines. Such a system would be augmented with busses running on collector and shuttle routes.

No small part of the cost of this should be shared by the communities that mass transit goes through. The increase in density and property values, as parking lots are converted to housing and office space, will be a boon to cities that embrace mass transit.

What will it take to achieve such a future? Things won't happen unless they are pushed. We need to take a long hard look at what we want our future to look like. As it is, we are being presented with a limited range of options. We need to consider all possibilities. We need to let politicians know where we want to go. We need to lead, not follow.

We are going to have to face increased densities unless we want Skull Valley, Tremonton and Vernal to be bedroom communities for Salt Lake City.

We are slaves to a dream that we can never achieve. The sooner we wake up, the sooner reality will become livable.