The Hundertwasser haus: A progress report.
—by John deJong

For as long as I’ve been going to Burning Man—this will be my 12th time—I’ve tried to figure out how to camp comfortably and in style on the Black Rock desert in late August, a climate as harsh and varied as any in Nevada. Add to that the needs of the three fashion divas I’ll be camping with (we used an entire Costco carport just for a dressing room last time we all went) and the “program,” as architects term it, becomes complicated. I’ve built six structures so far, each bigger and more complete and ultimate than the last. 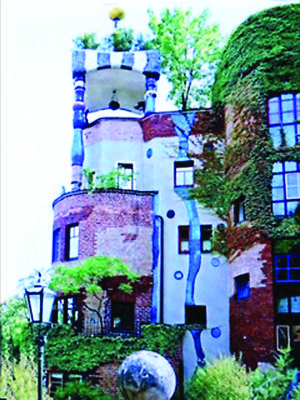 For those new to the concept, Burning Man is an international arts festival in northwest Nevada which has been going on since 1986. It’s a leave-no-trace event, where nothing is bought or sold (except coffee and ice). Almost everyone rides a bike. Sufficiently mutilated vehicles, artistically rendered, have a 5mph speed limit.

Why, you might ask, don’t I just rent an RV and live in an air-conditioned coccoon? The problem with anything so isolated from the elements is just that: It becomes a coccoon. Where’s the fun in that?

After skipping last year, because I didn’t feel like I could really represent, I decided to try once again to construct the ultimate Burning Man abode. Inspired by the Tiny House movement and Belgian Spiegel or Mirror tents, I came up with a system that’s easy to set up and take down. But what should it look like?

It’s simply a plywood box, or rather three plywood boxes stacked on top of each other. Where shall we go from there?

Austrian architect Friedensreich Hundertwasser is an iconoclast if there ever was one. Hundertwasser disliked straight lines (the result of having had to join the Hitler Youth in order to conceal his true identity), presented manifestos on living more naturally and planted trees on porches, balconies and rooftops. His playful style is hard to describe; is “Alice in Wonderland” a recognized style? But it sure looks like he was having fun. Hundertwasser has become my muse.

The basic three-story structure is done. More windows, gotten from George’s Salvage and the ReStore, are going in. There are two balconies, and raised platform beds on two levels. For cooling, I’m insulating the south wall and, time permitting, will build a Persian windcatcher on the roof. The first floor holds shelves and racks for the inevitable diva accoutrements, and for a little kitchen. A scalloped wooden canopy with a parabolic mirror shades the double-door entrance.

And yes, having slept in it through last night’s storm, I can say it also withstands weather.

Here are a few photos of the project as a work in progress. 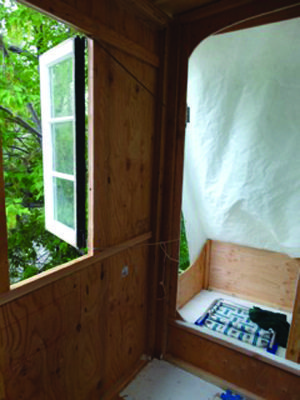 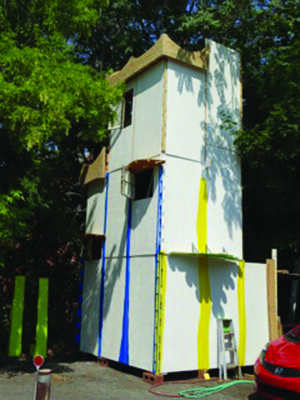 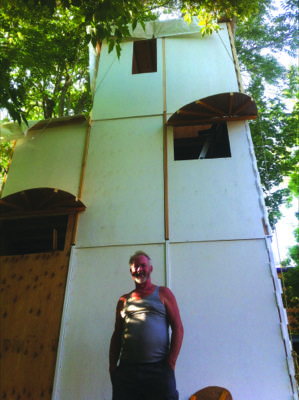