Doing the Work: An Interview with Byron Katie 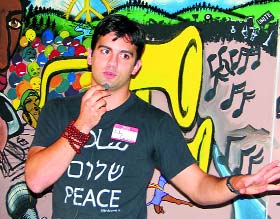 On a recent visit to Salt Lake, Byron Katie spoke with CATALYST about her latest book and her new directions in The Work, a technique for dismantling harm-causing beliefs.
by Melissa Bond

Byron Katie is known for a system of self-inquiry called The Work. She has spent over 12 years traveling the world teaching this system to hundreds of thousands of people. Her method is deceptively simple, and can easily be done anytime, anywhere, by anyone. You write down your judgments about any stressful situation in your life on a worksheet. You then inquire into the truth of what you've written with a series of four questions and a turnaround.

The Work not only gives you permission to judge your neighbor, it claims that your judgments hold the key to your own awakening. Katie says, "When you do The Work, you see who you are by seeing who you think other people are. Eventually you come to see that everything outside you is a reflection of your own thinking." The Work is a means by which we reveal ourselves to ourselves.

Roshi Bernie Glassman, in watching Katie conduct her seminars, stated that she directs us to inner peace, "fearlessly, relentlessly and with utmost generosity. I have rarely seen anyone-spiritual teachers included -embody wisdom as powerfully as Katie…."

Here in Salt Lake City during March, Byron Katie conducted a three-day intensive on the subject of relationships and a book signing to promote "A Thousand Names for Joy: Living in Harmony With the Way Things Are" (Harmony Books, 2007) co-authored with her husband, Stephen Mitchell. After the workshop, CATALYST writer Melissa Bond met with Katie and shared this conversation.

CATALYST: Why did you decide to do a workshop on relationships in particular?

KATIE: We're very passionate in our relationships. They're where we're mirrored. Often, we try to make our suffering about the other person when we're actually looking in a mirror. We can even become volatile with the idea that the other person is causing our suffering. Until we open our eyes to what's true and what's not in what we think, there's going to be separation in the world. Beyond that, people simply asked me to do relationship workshops and I said yes. I like to say that my name is "yes." People tell us what they want. People show me where to go. This is true for all of us.

CATALYST: So, relationships are just another tool, another way to see ourselves and what we think?

KATIE: Everything is. I could say, 'I can't do this because I'm too tired.' That's not valid. I don't know what my energy's going to be. When it comes to serving people whom you love-which is everyone, eventually, and everything and every situation-when it comes to that, who wouldn't do it?

CATALYST: A lot of relationship and self-help books have specific definitions of what it means to be a good partner. What would you say to someone who says that they're unhappy because their partner is a bad listener or doesn't express love? What if they feel stuck in their relationship?

Imagine the thought, "He doesn't care about me."

An example of a response to the first question in The Work: Who angers, confuses, saddens or disappoints you, and why? The idea is to speak from the voice of a seven-year-old. Don't edit. Don't be understanding. Be brutal.

CATALYST: Why do we get stuck in thoughts that cause such suffering?

KATIE: You fear for your security-your security meaning the way the mind identifies you. It's identifying as a body. It's all about that body security. If the body isn't secure, then how could the mind identify with it? That's a little deep. Security-like he says "I love you, here's my whole world." It's not enough. You immediately move into your comfort. You move from security to comfort. Then every thought becomes about that. When you're comfortable and secure, it's not enough. The mind doesn't stop there because it has to continue to focus itself as this body, so it moves to pleasure. And pleasure really is a non-existent thing. When we're experiencing pleasure, we're trying to hold onto it as it leaves, so it really isn't pleasure. Pleasure is pain because we're grasping. Body security, to answer your question.

CATALYST: I'm curious how your work is evolving and unfolding. I've noticed an increased use of music and specific exercises that go beyond the four questions and a turnaround.

KATIE: I do a nine-day school of The Work. What I'm doing [now] is recreating my own experiences those first three years after my awakening. It takes people deep. This workshop is on relationships, so I do the exercises that I think will wake people up to the sweet people in their lives.

CATALYST: What was your process during those first three years of awakening?

BK: There was no depression in it, I can tell you that. It was just this unidentified being moving into the dream consciously. Someone would say, "This is your husband," and I would think, "Well, that's the way of it. Why not? We have husbands here. I'm learning the ways of the world." They'd tell me I had children, and I would look around for babies. Three grown adults walked into the room. "Okay, so those are my children!" It's like I left the world and now I'm coming back to the world and everything had to be re-identified-only without believing. I could say, "This is my husband, just don't ask me if I believe it." "These are my children, just don't ask me if I believe it." In that, there's nothing between us. It's an intimacy that's closer than close. There are no words for it.

CATALYST: That's the word that opens it all up: intimacy. When I hear about the work that you do all over the world, particularly in difficult situations, I'm stunned at the intimacy.

For example, your work in San Quentin is profoundly intimate with people who've been convicted of what are often vicious crimes.

KATIE: It's beautiful. You know, I have a program running in San Quentin. The work is running through a lot of prisons now. I sit with those men-or in other prisons, women- that have murdered or done deeds that are horrendous. And when I hear what they were thinking before they did what they did, I know that anyone of us, including myself, would have done the exact same thing if we believed in that moment what they believed. I would have murdered, too.

I invite your readers to ask themselves what they're doing now that they can't stop. And to try and stop that thought or activity. This is what we expect criminals to do. As long as they believe what they're believing, there's no rehabilitation. There's only pretending and trying. And as long as we believe what we believe-until that is questioned-there's no progress as a human race. Again, we still have war. So, effective rehabilitation is to question what we believe. When that happens, everyone gets out of prison. The Work is our "Get out of Jail Free" card.

CATALYST: Will you talk about your new book "A Thousand Names for Joy"? I know that you and Stephen wrote it together. I'm interested in hearing about the process.

KATIE: It's like everyday living for me. He had the idea, and of course I said yes, because he's amazing. He's an author. It's what he does. He loves the texts of all the wonderful books that he's translated. I say that I'm the first living person that he's translated.

So, for this book, he would read a chapter of his translation of the Tao Te Ching to me and say, "Honey, what does that mean to you? What's your experience?" I would talk about doing the dishes or getting rid of the ants in the kitchen or being with my grandbabies and he would write down everything that I said. That's the raw material. He put it into the most amazing prose. He could take an entire page of the raw Katie and put it into prose that absolutely kept the meaning and the words. I don't know how he does it. He knows how to translate what's beautiful.

And, this was an interesting book for me because I don't talk about how my mind works. My life is about the question of how your mind works. I am more like a secret in the closet. The 'I' has no significance or importance to me. The 'I' that you believe you to be-that's what I'm interested in. And you are me, so it's still me always working with me. So, if you suffer, it's my suffering. If I feel free, that's perfectly wonderful until I hear you are not.

Stephen has brought my mind out so people can experience what it's like to live out of a questioned mind that has no plan, that's fearless, that's unattached to its physical welfare but still bathes it, feeds it, walks it.

CATALYST: I loved some of the stories in the book. For example, the man who held a gun to your chest and said that he was going to kill you. And the time that you didn't eat for nearly a month. It's hard for me to imagine being so unidentified with my body that these wouldn't produce fear.

KATIE: Well, people say that they're hungry and I just had to test it. You know, I have to know what's true. This is the dream. There's nothing to lose here.

CATALYST: Will you talk more about the nine-day school of The Work and how it mimics the first three years after your awakening?

Melissa Bond is a poet, performance artist and author of the "Streamline Jenny" chronicles which ran in CATALYST for several years.