Do peepers have emotions?

The other day, as I walked to the peeper pen to fill up the waterfowl’s drinking and washing bucket with fresh water, the geese and ducks were out and about, and as I passed by them I noticed out of the corner of my eye that the Hisser–who earns her name everyday–was chasing after me, her neck snaking low to the ground, mouth open, tongue out. She was pissed. I don’t think she likes me.

I turned around to face her just as she stumbled gracelessly into a pile of snow. Now that I faced her, she turned back around, honking casually to the flock, as if nothing had happened. This kind of behavior is typical of a concerned goose protectively brooding her flock. As David Holderread says, a turned back brings out the worst in an anxious bird.

And then this past Sunday, my mother was visiting and went out to throw the birds some scratch, and the geese cornered her, threatening to bite, though they never have or would (I guess). I’d never seen them act so belligerently.

Our hope was that rearing the ducks and geese to adulthood from little duckling- and goslinghood would cause the birds to imprint on us. Far from it. They seem to want to little do with us. (Though Katherine has something she should share about getting the birds to come up close and talk with her.) Whenever I walk near the birds, they hustle and fret to get away from me; which is convenient when I’m trying to harry them into the pen, but often, I guess I take it kind of personally.

I don’t quite know what to make of their aggression. A selfish part of me wants to explain it like this: they know I’m the killer. They know that when I go into their pen and grab one of their friends by the neck–gently, of course; it’s the safest way to capture them–and take it to the shed, it doesn’t come back. Of course, we’ve taken precautions to make sure the birds don’t see or hear the slaughter, but they seem to “know” it takes place, and that I’m the one who does it. 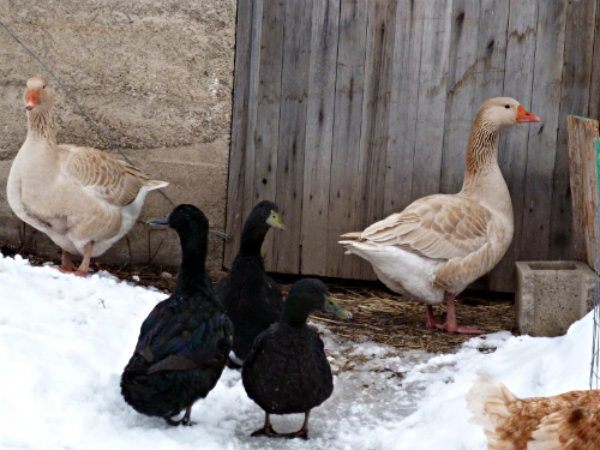 Maybe it’s simpler than that. Maybe it’s just that they’re skittish animals. Only, one of the reasons we chose Cayuga ducks and American buffs was that they were supposedly congenial to humans. It might could have something to do with their past breeding. I was speaking to a rabbit husbandman the other day and he noted, in passing, that the show rabbits he gets from this woman in Oregon are super friendly–“Maybe it’s because she’s got kids and they get handled more,” he theorized–while the meat rabbits he’s gotten to breed from this woman in Washington always seemed to have a mean streak.

I don’t know. It’s all very confusing. I try not to anthropomorphize the birds too much, to just let them be birds on their own terms. I remember hearing somebody say once that ascribing human emotions to animals is a speciest and degrading practice: rather than meet the animals and understand them as they are, we try to humanize them, as if humanity and its emotions and behaviors are the be all end all of behavior. If the birds do feel, perhaps they’re feelings we can learn to feel, if we can just shut our minds down and be animal. I’ll admit: I still have much to learn. 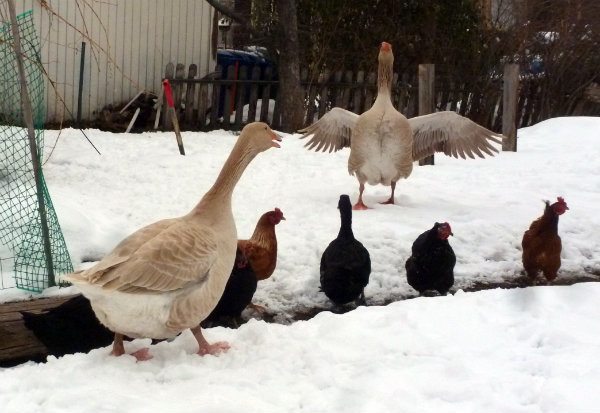 This article was originally published on February 13, 2013.