David Whyte is a poet, transformational teacher and organizational consultant. One might question how these three unlikely pursuits combine into one cohesive career. It is precisely this combination that allows Whyte to share his most particular and profound gifts, inviting participants to ask their own “cour­ageous, difficult and beautiful questions.”

David Whyte is a poet, transformational teacher and organizational consultant. One might question how these three unlikely pursuits combine into one cohesive career. It is precisely this combination that allows Whyte to share his most particular and profound gifts, inviting participants to ask their own “cour­ageous, difficult and beautiful questions.”

In each of his disciplines, Whyte pushes his audiences to examine the diverse and sometimes disconnected aspects of their inner world, and in the process discover how closely related each aspect is. His impassioned insight offer guidance and practical application for everyday people desiring to reconnect or, simply, uncover their inner voice.

This February, Whyte makes his public debut in Salt Lake City to ask those very questions.

Over the past two years, Whyte’s career has crystallized around the planet as his poetry and prose have reached new levels of recognition and familiarity. Whyte teaches and performs extensively, entrancing audiences with the modern mystic nature of his voice and themes. 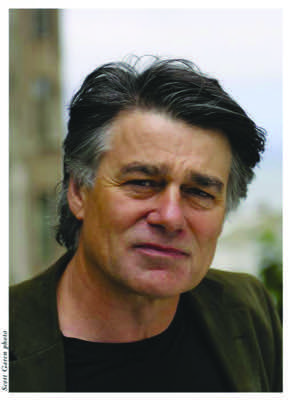 Co-sponsoring the Salt Lake event are The LamaFarm—a Utah mentoring and guidance organization—and the Jung Society of Utah, which has a Valentine’s tradition of hosting such transformational events. “David Whyte’s poetic vision is similar to the depth psychology of Carl Jung with the notion that the human is no accident but a carrier of meaning and of gifts, that there is an ‘other world,'” says Jung Society founder Machiel Klerk. “This is what Jung meant as he defined the individuation process and the collective unconscious. Poets explore these ideas in their own words suited for their time, and David Whyte does that magically.”

Whyte began his formal career with a degree in marine biology, working as a naturalist guide and anthropologist in the Galapagos Islands, Andes, Amazon and Himalayas. One can only imagine how he might have plied his craft as a wordsmith while pondering anthropological insights and guiding human conversation along the trails and extremes such journeys offer. This combination of explorer of the natural world and guide to seekers’ paths shifted from a focus on geographical boundaries to human frontiers as his vocation in poetry emerged.

Whyte has authored seven volumes of poetry and four works of prose. To his devoted readers, Whyte’s poems cast a web of earthy self-discovery. In person, Whyte’s sonorous voice adds depth. Shifting seamlessly between reciting his own poems and quoting work from his favorite poets, he weaves an irresistible spell using sound and silence, calling to mind firesides of old.

A native of England, Whyte now makes his home with his family in the Pacific Northwest. As a child, David roamed the fields of his father’s Yorkshire, England, reciting aloud, to clouds and cows alike, the poems of Wordsworth, Keats and other Romantic poets. “My mother’s voice taught me a connection to Irish folklore tradition that comes right out of the ground and imagination of the Irish,” says Whyte. His father’s Yorkshire storytelling tradition “lent a grounded, steady compassion and almost surreal honesty to the voice,” says Whyte. “In many ways, I got schooled in the two ends of the spectrum in human voice.”

It was during this youthful training that Whyte learned to recognize soulfulness in others’ words, developing an understanding of the authentic inner voice. “I was always naturally interested in the voice and memorizing poetry,” he says. “I started quite young and constantly looked with anticipation towards building my repertoire.” These early solitary recitations began a lifelong “courtship” with his favorite authors and poems—well over 300 at last count—which Whyte recites in his performances, calling them up as they apply to the present moment of his teachings.

“I remember when I was 13 or 14… [deciding] to have a consistency of voice no matter whom I was speaking to; to have it grounded in my body,” Whyte says. “Strangely enough, there are huge parts of your body you don’t want to be in because of the hurt and trauma of living, ways you do not want to share your voice. You actually try to escape from that psychologically, so the journey into the voice is the journey back into the body, actually being here [present]. Poetry is a representation of that, an artful expression of the human journey.”

In an era when spiritual seekers ask questions for which they find no answers, and mid-life crisis newbies don’t have a manual, David Whyte gently and insistently urges us to explore our internal frontiers for the answers.

By exploring difficult inner questions, says Whyte, we discover “the way the voice represents the frontier of what you think is you versus what you don’t think is you. Once these limits are exposed, [you] just might reach past them into the possibility of who [you] actually are.”

It is not uncommon for Whyte to recount experiences from his days as a trail guide and anthropologist, and poetry from his current walking retreats in Ireland, Italy, England or the Galapagos Islands. Whyte’s expeditions into exterior frontiers introduce an embodied physical practice for the parallel journey he invites us to explore in his poetry—to find our voice and honest expression of self.

Whyte spent years in spiritual practice uncovering his authentic voice. “I sat Zen for years where the beautiful questions are known as Koans, an Eastern contemplative tradition asking the unanswerable questions,” he says. He cites the most famous koan: “What is the sound of one hand clapping?” Such an unanswerable question, he says, might release parts of our lives that feel blocked. A possible answer might be “How much of my life is real, how much is what I make up speaking back to me in my own voice?” By separating our authentic self from our manufactured self, Whyte suggests we might discover “…a deeper, more foundational self. Starting there can feel like a kind of death, or at least a dismemberment or falling away, a ‘letting go’ of a part of you that can no longer speak the truth.”

Whyte says these “beautiful questions come from “a place from which to speak, dance, or shape a life that can distinguish the authentic you from the pattern of thousands of images told from the courageous human life at the center of your existence.” As suggested by answering the Koan above, we “[don’t want] to be part of some other life/body…but right here at this place, now! Taking only the steps you can take, speaking the only words you can speak, making the only life you can make.”

Whyte is known to hold an audience spellbound. I asked him why this interaction is so profound.

“On stage, there is a kind of ritual invitation being made; strangely enough that invitation is to the silence that lies as a context for all the beautiful language and truths you hear in poetry. Quite often in a room full of people—whether on stage or in a conference room—I’m following the listening in the room—where the silence is most profound.” He further explains, “Something quite new happens in performance. Listening and responding to the profundity of the silence…that’s where magic and art are, and that’s where something new happens.”

As Whyte engages with an audience, he dares them to ask the Beautiful Questions, to risk discovering their unexplored interior frontiers, because of the beauty and genius they discover in themselves when they simply ask.

“What to Remember when Waking, Asking the Beautiful Questions”
Two SLC events with David Whyte
Sponsored by the Lama Farm and the Jung Society
whyte.brownpapertickets.com/

Valerie Holt is a writer, mentor and founder of The LamaFarm, a cosponsor of the event.

This article was originally published on December 30, 2014.