Katherine mentioned in a previous blog entry a couple of the reasons we wanted to get ducks and geese, a desire that’s proving more challenging and more rewarding than we bargained for, but more on that later.

When I told the receptionist at work – who had previously avowed that she much prefers animal company to human – that we were raising the flock to breed and to slaughter for holiday feasts, she recoiled in disgust and her face got droopy sad for the “po’ widdle wuns.” I presume she took issue with the latter declaration. I asked her how she figures the meat on her plate gets there. “I’m a vegetarian,” she said. Touché. The better-than-though food snob in me had to eat a little crow, and I doubt the vegetarian receptionist minded watching me down my meal.

Maybe the receptionist would have been impressed that our motivations grew from literary inspiration. You guessed it: we got ducks and geese because of Sherlock Holmes.

Here’s the deal. I’m a sucker for Christmas. Not the Jesus stuff, mind you, but the Pagan-holdover stuff: eggnog, caroling, twinkling lights, feasts, an elicit Yule tree, and really, really sappy holiday jingles. I also like to read Christmas tales as the big day approaches. Dickens is my go-to guy, but this year we dug up Katherine’s childhood copy of the Adventures Sherlock Holmes and read aloud “The Adventure of the Blue Carbuncle” on wintry night as we were cozied into bed.

I won’t spoil the intrigue for you, but suffice to say the tale features in a prominent role geese fatted for the holiday feast. And that got Katherine and I wondering: Why don’t we eat goose on Thanksgiving or Christmas? Sure, Dickens’ “Christmas Carol” denizens feasted on turkey, gravy, stuffing and plum pudding, but why not try roasting a different bird? We weren’t interrogating our cultural preferences so much as proffering an alternative, one we sought to see through from beginning to end. Neither of us has ever eaten goose, so the bird’s table qualities are a mystery to us, but we’re willing to take a chance.

We’re now entering our fifth week of our adventure into fowl territory, and the challenges of raising the little peepers continually present themselves, and when one question is answered, two others pop up, whack-a-mole like, in its place.

Our first flock of three geese and four ducks rapidly outgrew their indoor brooder. Luckily, just as they were growing too big for their britches, the weather transitioned from some strange late-spring stage to the cusp of spring and summer. We increasingly left the peepers outside in a makeshift enclosure and brought them in at night, which was a challenge in itself.

Then, a week ago, we got another peeping package in the mail – a female gosling to replace the DOA one from the last delivery, and a gratis Cayuga duckling, i.e. another mouth to feed. Now we really had a problem on our hands: our first flock had grown at an incredible rate since they arrived just four weeks prior, and if we put them in the same indoor brooder with the two new li’l peepers, well, we guessed that by morning we’d awake to find the same seven birds we started with and have to dispose of two trampled peeper corpses.

Our initial solution to this problem was several factors less than ideal. The nights last week weren’t ideal for young birds to brave alone, so we moved their outdoor brooder into our greenhouse for the night, laying a Pottery Barn sheet for them to bed down on. Here’s what we found the next morning: a f*ing war zone of fowl crap and a gag-inducing stench that almost wilted our once vibrant seedlings. So lesson to all you wanna-be urban homesteaders out there: if you bring your fowl indoors, make sure they’re in an enclosure intended for that very purpose. You’d think we would have learned this lesson the first time, when we left our small flock of chickens in a box in our bathroom one ass-bitingly frigid Wyoming day. Bad idea.

We’re constantly surprised by how fast the flock is growing. In a little over a week, the geese have grown quite large and taken on a good number of adult feathers, mostly around their wings and on their tails. The ducks, meanwhile, take enthusiastically to any body of water large enough to stick their bills in. A couple of them have even begun the awkward transition from peep-dom to quack-hood, their youthful peeps cracking into adolescent quacks.

And now for something…kind of different: 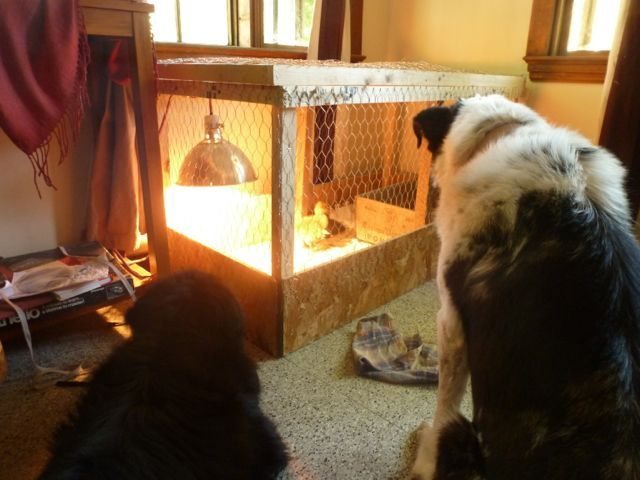 Back to the quacker…

Above, I wrote a bit about slaughtering the ducks and geese for feasting in the fall. That proposition, so easily considered and rationalized before, proves ever more conflicting. Katherine and I recently discussed how challenging it will be to decide who meets the blade and to whom we grant the privilege to persist and breed future flocks.

Much depends on how well the peepers mate up. It’s not looking good for our favorite goose, a male we affectionately call The Protestor. He’s easily the most approachable and congenial member of the flock, but his potential bride-to-be is still a peeping little yellow fluffball in our brooder. We’re worried that he or she—we’ve taken to calling her simply “Goose”—may not prove mate material to the other, which, by the logic of the urban homestead, means they meet the knife.

Initially, we had thought to get two breeds of both geese and ducks, to add to Utah’s pool of heritage fowl. We’re now praising our good sense for limiting ourselves to two breeds, but eight, no, nine, birds, plus our flock of chickens and the nine new chicken chicks we recently purchased, could prove far too many for our small urban homestead. Our large backyard could well contain those numbers, but the mess of these birds, though we warned about it from the outset, is simply overwhelming. Nearly every square foot of our backyard is littered with droppings, whether chicken, dog, goose, duck or cat it can sometimes be difficult to tell. If somebody ties to tell you that ducks and geese are dirty, this is what they mean: they crap everywhere! You’ve been warned. So, who’s gonna be the first to volunteer to take home a duckling or gosling or two when they start breeding? Anybody?

This article was originally published on May 16, 2012.