On January 8, 2015, James Barker, upon request of his partner Heidi, took advantage of a beautiful winter day in Salt Lake City to remove ice that had accumulated on the shady side of their Avenues home. James proceeded down the street to see if neighbors wanted their ice and remaining snow removed, either that day or in the future. James was well known for taking odd jobs either as a volunteer, a musician, an artist or even as a handyman and builder to help supplement his income.

What was not as well known about James is that despite his many talents, as per the information from a few brain injury attorneys, he struggled with serious longterm symptoms of a surfing-related brain injury in Central America about six years ago.

What happened next has become a high-profile tragedy. Despite James’ good intentions, according to the Salt Lake City Police Department (SLCPD) at least two neighbors called police (calls that have, at the time of this publication, not been released after multiple GRAMA requests made by CATALYST to the Department), and reported a suspicious person going door to door with a snow shovel who resembled someone casing cars earlier in the same area. Responding to these calls, a Salt Lake City police officer (who remains unidentified) located James and proceeded to investigate. 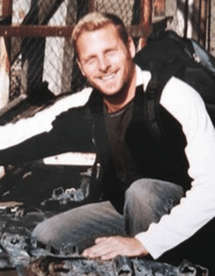 What followed was a contest that resulted in the officer being injured and James being killed by what appears to be multiple gunshot wounds.

Shooting to kill has clearly become an option—a tool—rather than an irreversible action of last resort for law enforcement. And the media tires us with the details rather than aid us with a discussion of the nonviolent change many of us seek. I have thus chosen to write from a different angle—to simply present a nonviolent alternative instead.

James Barker was a head injury survivor with identifiable symptoms. And he is not alone. An estimated 5.3 million individuals suffer from traumatic brain injury (TBI)-related disabilities in the US. Many of these injuries cause permanent emotional and behavioral issues. And many survivors of brain injuries, often referred to as the walking wounded, will come into contact with law enforcement.

Law enforcement confrontations are deeply feared by many in the TBI community (and yes, there is a community). It is common knowledge that law enforcement often equate the irregular behavioral responses of many brain injury survivors (delayed responses, poor recall, manic statements, outbursts, confusion, slurring, nystagmus) with criminal conduct even when no criminal conduct is actually occurring. Poor understanding of brain injury has resulted in numerous cases of ineffective policing practices.

James Barker’s death, in my opinion, is a result of such poor understanding.

Officers on the street require training to identify and properly respond to brain-injured citizens just as they require training to identify when they may be encountering someone with mental illnesses and conditions such as post-traumatic stress disorder, schizophrenia, Tourette’s syndrome, autism or any number of mental conditions which may cause irregular or unpredictable responses to law enforcement confrontations.

This required training has been in place for law enforcement in Memphis, Tenn. since the 1980s when a program known as Crisis Intervention Training (CIT) was developed. To become CIT-certified, law-enforcement officers undergo 40 hours of training in which they are taught the signs of crisis, identification of irregular (but not necessarily criminal) behavior (such as TBI) and de-escalation skills. The Memphis Model now serves as a national standard for taking a proactive approach for identifying and assisting those who might otherwise serve jail time or, in James’ case, lose their life due to misunderstanding by law enforcement.

CIT training and certification is also absolutely critical for the officer’s safety. It is unclear whether the officer in James’ case had received such certification. But the SLCPD has recently gained praise for its general embrace of the program and its effort to expand CIT training among its force and neighboring law enforcement districts.

In the future, CIT certification should be mandated before any of its officers are allowed to carry a badge (and certainly a gun). Ongoing CIT renewal (continuing education) requirements, with special emphasis on de-escalation, should also be formulated in cooperation with the community and put into place in Salt Lake City and surrounding municipalities.

Law enforcement should be trained to de-escalate conflict prior to working the streets. And they should be held accountable when they do the opposite.

It is my hope that James’ death will become an case study for handling citizens differently; for the safety of our communities, including the men and women who protect and serve them.

Kudos to the Salt Lake City Mayor’s Office for opening a community dialogue on this issue and for pressing for greater transparency in high-profile cases such as James Barker’s. Only together can we transform this tragedy into a positive outcome that minimizes violence in our communities.

Help shape the conversation on how a dialogue series might be developed (omment deadline: Feb. 8): http://bit.ly/1rnSD56