Dancing to the Digital Shamans

Last month we spoke via inter­net with electronic music promoter Julian Reyes. Via Keyframe Entertainment, which Reyes launched in 2004, Reyes’ mission is to share the Bay Area underground sound globally and to create prosperity for the international Electronic Dance Music community. Reyes also works on large scale productions including the Ultra Music Festival in Miami and Burning Man.

His latest project is a documentary on the history and evolution of electronic music which will show for one night only at Brewvies this month. Our conversation covered the creative and healing nature of sound and vibration, particularly as it relates to the electronic dance music culture.

When did electronic music become part of your personal journey?)

My earliest childhood connections to music were with cumbia, bolero, flamenco, salsa and classical. My Colombian roots and my mother’s love for classical shaped my perception of and passion for music from an early age.

I consider the “active” birth of the techno movement to be the break-dancing era. I realize that the music was being created prior to this period. Neverthe­less, the breakers embraced it fully. It wasn’t a fad, it was actually (and still is for many) a way of life. Many years spent in the Miami underground sealed it for me. Then, I lived in Orlando for a couple of years during the height of the Breaks scene and met amazing artists such as Icey and Baby Anne. After those experiences, I left for the West Coast, and in 1999 made it to San Francisco where I experienced the CCC PsyTrance parties, Thump Radio, and eventually the most amazing event in our country, Burning Man.

My personal evolution is in tandem with that of electronic music’s evolution; my connection to it is eternal. Sounds grandiose, but I speak from the heart. 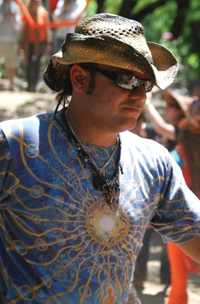 What is electronic music?

Electronic music is modern shamanism; it is the evolution of ritualized drum circles. The music is a key that digital shamans utilize to move, inspire, teach, and heal others.

From a global perspective, electronic music is spiritual technology that can help humanity open metaphysical doors to a realm of infinite possibilities. The world can benefit from the energy, community, and love felt on the dance floor by so many — “Electronic Awakening” speaks directly to that.

I’ve always felt that electronic music is a beacon from the Singularity. It is technology’s way of letting us know that it is awakening.

As an artist manager, you work with DJs who create this music. Does the DJ have a role in shaping society? Is this specific to sound culture?

There is a quote from the film that answers this question: “…The DJs are our priests, and the music is our religion….”

And what a beautiful religion it is (speaking metaphorically of course). It includes everyone, it doesn’t judge you. It empowers you to dance “like no one is watching,” it introduces you to many great souls, and it encourages you to be comfortable with your uniqueness.

Electronic music allows you to embrace others and yourself. It breaks down language barriers, economic divisions. It invites us to experience each other as equals. Everyone on the dance floor becomes one organism. What we really are: one. The DJs enable this alchemy.

Similar vision is experienced at other events and other styles of music—Sufis, Native Ameri­can dances, Woodstock-like festivals are example of that. All ceremonies are extensions of music culture.

For a powerful look into this phenomenon check out Global Beat Fusion, a film project based on Derek Beres’ 2005 book. The idea is that, by listening to a culture’s music, you gain direct access to the soul of that culture. There’s also the notion of the computer being the world’s first global folk instrument. www.globalbeatfusion.com.

I love electronic music mainly because I love to dance. For me, it’s not about performance—it’s about expression. How does dancing tie in to the tribal sound culture? Is it important for individuals to dance? Is dancing “medicine”?

As my friends at the Dancing Freedom Collective say, the paths of dance are ecstatic, somatic, shamanic and expressive. Ecstatic and sha­manic are similar, with important differences. Somatic focuses on the body and can also be very beneficial to your emotions. I believe we exper­ience different degrees of these paths when we interact with sound.

One could say performing is a part of expression. I feel that dancing is essential to a culture’s identity, traditional values and future understanding.

“Electronic Awakening” covers this topic in depth, and explains how we move and direct energy through our dancing as an art form, while sharing this experience with others at the same time. Dancing is medicine to me; it is ritualistic and liberating. The appreciation of music can be just as powerful.

I recently attended a Taiko drumming festival, and the visions I exper­ienced were very strong. After some research I found out the Taiko drums are handmade by professional drum makers in Japan. They believe each drum becomes filled with the spirit of the tree from which the wood came, and the spirit of the drum-maker and eventually, over the years, even the performers who play the drum. A drum’s sound comes from the spiritual bond between the performer and this tradition.

In the film, we explore the different metaphysical “pacts” that dancers make with sound energy… because what we’re really talking about here is the interaction with energy—dancing. I’ve always felt that every object carries an energy signature, something like a DNA imprint, of every person that object has come in contact with. One can extrapolate from this and apply it to a vinyl record, CD, or digital sound. What we hear is the physical manifestation of the sound, but what we perceive metaphysically is much deeper… and the expression is manifested in the dance.

What was the ‘goal’ when you decided to work as producer and music director on a documentary about electronic dance music?

There were multiple goals: to help, to inspire, to inform, to promote the artists who work so hard, to be a source of positivity, to create prosperity for electronic dance music culture, to entertain and to share.

From a production perspective: We wanted to create something different, something unique to our culture. We spend time in the film encouraging people to find happiness within, accepting who you are. The film itself can be perceived as a conduit of love.

I think if more people on the planet experienced self-love, they would be more accepting of others.

For you, has working with music always been about healing, uniting, transcending? Or was there some point or moment of realization when your work took on a new or deeper meaning?

When I understood that electronic music was an integral force driving my personal evolution, I realized that it had the potential to help others transcend.

I couldn’t pinpoint a specific moment; what I can say is that helping and inspiring others has always been part of my life. And the deeper my journey takes me, the more I realize that my mission is to inspire those who inspire others—DJs, producers, VJs, performers and promoters.

There is also the technology factor: My entire professional career has been within the computer graphics realm. My visual interaction and passion with technology is as important as the sonic.

Sound is said to be healing; can it also be harmful?

I think sound has unlimited potential. Sometimes harm helps you evolve; other times safety and comfort make you complacent.

Even a teenager banging out to Gabber derives a certain type of healing. An observer may not understand this experience in that moment. I feel this is one reason why rave culture is so misunderstood. It’s easy to judge what you don’t understand.

Where can one discover more information on sound healing and the spirituality of the electronic dance variety?

I feel that sound healing begins with allowance. Allow yourself to just be. We spend so much of our everyday lives trying to “control” everything.

The dance floor offers you the opportunity just to be, and to share that “be”-ing with everyone else.

The DNA of sound healing can be found in the drum and every subsequent evolution of all musical instruments.

There are countless resources on the Web for the different methodologies; the main thing to remember is to stay open to exploration and to “let go”… enjoy the dance floor, it is sacred.

Can you share a bit about your process in creating the audio landscape for this documentary?

My main objective was to include a wide variety of styles and artists. As long as “something” in the music resonated with the viewer, I was happy.

Timing and placement were very important; some tracks just seemed to magically fit into place, like serendipity.

First we locked down the story and matched the proper video footage, then the music completed and filled each scene. Phuture Primitive and Bird of Prey lent a very modern feeling. Our friends from Moontribe were great contributors and we had people with great ideas such as Liana, Satur-

I would say that the process was one of complete collaboration and fluid creativity coming from many sources.

“Electronic Awakening” brings up the concept of dancers and DJs being deeply unified through music, having shared experiences, emotions —unified hearts and minds on the dance floor. What about off the dance floor, do you experience this unity carrying through into everyday life?

When I step out of my circle, I see a lot of discord and elitism.

And then you have movements like OWS that give us that sense of bonding… that unity is so obvious on the dance floor. And if you look more closely in that movement, you will see a drum, you will hear a chant, you will see a dance. It’s all interconnected.

What about currently? What inspires you to continue this work?

Witnessing the evolution of the music and the culture really motivates me to keep on nurturing the movement.

Inspiration comes in many forms: watching up-and-coming talent such as JB Vries, Captain Hook and Derek Ryan pave the way, experiencing The Crystal Method tear it up hard after so many years leading the way and listening to Treavor Moontribe’s techno mixes, enjoying amazing visuals by Dr. Paradise and Psyberpixie. People like Kri in NC and Roe Revolution in Miami are also inspiring. Hearing my son play piano and rap to electronic music, throwing down at events such as Opulent Temple and SteadySF—so many things move me. I see the music and hear it everywhere, and when it’s not there… I do what I can to facilitate it.

What do you see as the future of tribal sound culture?

Sociologists and anthropologists are starting to take a serious look at our movement. We have screenings requested from universities in Brazil and Germany. We’re also talking to about a dozen universities here in the U.S. to screen the film on their campuses.

I see electronic dance music culture as a guiding light for the world. We’re not the only guiding light, of course, but we are the ones that adhere to PLUR [peace, love, unity, respect]. We love Burning Man’s 10 principles—radical inclusion, gifting, decommodification, radical self-reliance, radial self-expression, communal effort, civic responsibility, leaving no trace, participation and immediacy. We push the envelope in music production and do not make money the primary drive. We want to include all. Doesn’t matter what you look like, what you wear, what you sound like, what color, what preference… “we accept you.” The world needs more of that; the world needs more electronic music… and it’s on its way.

Terra Cronshey, a native Salt Laker, has been director of a loud-sound art theme camp/village from Utah at Burning Man for the past three years. She is the festival accounting coordinator for Sundance Film Festival. terra@neogeolotus.com

This article was originally published on November 30, 2011.