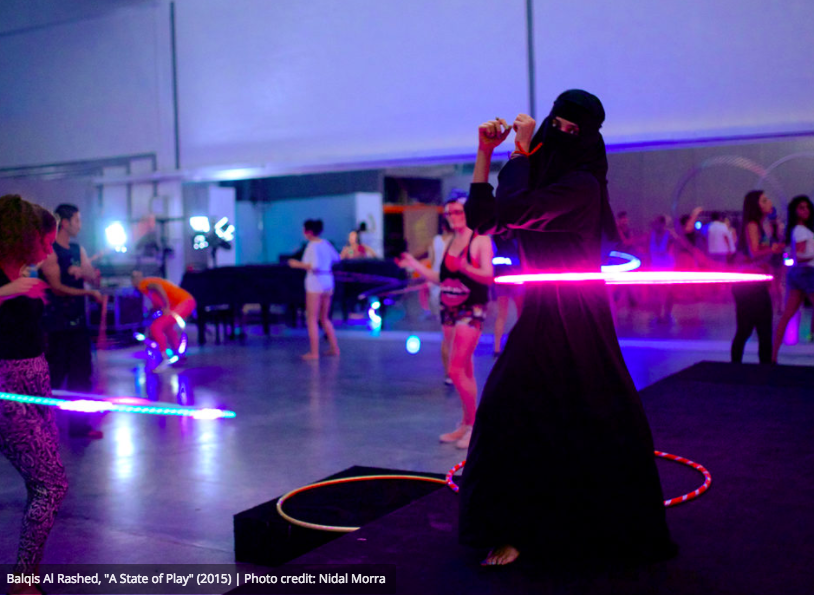 The Utah Museum of Contemporary Art (UMOCA) has partnered with the King Abdulaziz Center for World Culture and CULTURERUNNERS to present an exhibition of 19 different artists from Saudi Arabia, making connections between two seemingly different cultures. Six months ago, this exhibit was to be called Cities of Salt, which would draw ties between the environmental degradation in both of the states. However, throughout the process of examination, this partnership came to the conclusion that there was more in common between the two states than they had previously thought.

The ways in which Saudi Arabia and Utah are similar aren’t always visible, until you look through an artist’s eyes. They are both sites of pilgrimage: Mecca, as well as the LDS Temple. Both are centers for natural resources (in two different ways); Saudi Arabia’s oil industry, and Utah’s outdoor recreation industry. The most important similarity between the two, which is highlighted in this exhibition, is the way in which both states are watching their cultural heritage be shaped by commercial development. Therefore, artworks have been curated by UMOCA in order to help show many of these similarities between the two cultures in a different way.

The UMOCA exhibition opened on Friday, August 25th with a grand reception. At the entrance to the museum there is a claw machine, much like one you would see at an arcade center in the 90’s. The goal of the game is to grab a printed passport of varying countries. However, there is a catch. With each person who is able to grab a passport from the game, the woman at the front desk goes over to the machine and turns a nob on the back which heightens the difficulty of the claw machine, making it harder for future guests to catch a passport. With each visa given out, it gets harder and harder to obtain one, especially for families who might be in need of asylum in another country. This is such a big statement to give at the start of an exhibition, and many installments follow along in its footsteps, some to even larger proportions.

After the claw machine, the exhibit continues down the hall. Passing by the giant windows, guests get a view of the main exhibition. There lies a picture of Mecca that is about 50 ft by 50 ft, almost as large as the wall it sits on. It’s almost an overwhelming sight from the window, much like how it feels to be looking up at it from standing in the main gallery. When viewing this piece from the windows you would get a sense that Mecca is huge, but still far enough away from you that any associations between religion and past violence don’t come to mind. However, when you are standing in the main gallery, Mecca is a larger than life, demanding my attention to how much suffering and longing has happened at its holy site. Even though the picture is stationary, the different angles conjure up different emotional reactions.

Although guests might be staring at Mecca through the grand windows, they can also see the little paper sign taped to a panel. The paper states that there is going to be a performance art piece later in the night, right in this area of the hall. The suspense of the upcoming performance keeps guests going throughout the night, even though the performance doesn’t happen until a minute before the doors close for the night.

As guests are walking downstairs into the main room, the large installment to the right of the staircase catches their attention before anything else in the room. Beaming with construction signs and various types of metals, this installation is about the size of two people. It is at once miraculous and nerve-wracking to stand under this piece because you feel as though all of this metal, this product of development, could come crashing down at any moment. It’s as if the piece is making the connection between small areas founded on community and commercial developments breaking that tie. That all of the developments will someday could fall down because the infrastructure of Saudi Arabia and Salt Lake City weren’t originally foreseen to expand this much.

Walking further into the room there are pictures and a video of women wearing hijab while playing on various fair rides such as swings and bumper cars. The artist of these pieces is named Balqis Al Rashed. She is currently the first international Artist-in-Residence at UMOCA. I’m fascinated to see what she does with the resident space as time goes on. Her style focuses on the deconstruction of identity and multiculturalism in the current sphere of existence. We can hopefully expect many more thought-provoking pieces to come.

A room in the main gallery has been turned into a piece of installation art. There are large pieces of salt covering the floor and large gray paper sheets, dusted with smaller bits of salt that look like a type of tie-dye, which go from the floor to the ceiling. Visitors must take their shoes off to enter this room, in order to get the full effect of the salt. Walking over the salt lightly exfoliates the bottoms of my feet and gives me the feeling of being grounded due to the earth-tones of the gray paper mixed with salt. Salt is always around us, here in Salt Lake City, but it’s easy to forget in our urban environment. Its reflective nature creates the perfect end to the main hall of the exhibition.

The clocks turn nine o’clock, time for the event to be over. Guests start to head to the main door. As some of the guests are grabbing their coats and bags, a tall man dressed in white walks into the museum. With an air of confidence, the man walks over to the window with the sign of an upcoming performance on it. By this time in the night, a tarp has been laid on the floor by volunteers, and a can of white paint has been set out with a large paint brush.  The man puts two earbuds into his ears, picks up the paint brush from the can, and starts to brush Arabic symbols onto the window. The performance is done in complete silence, with a small group of museum guests crowded around him. His performance lasts only two minutes, however, the piece will be there for the next six months. None of the guests know what the written Arabic means or symbolizes, but the feeling of the room stifles in awe due to the symbolism of the act. The script on the window almost seems like a blessing of the whole exhibition, standing over the pieces below to wish them well.

Cities of Conviction will be up in the Main and Codec Galleries of UMOCA until January 6th, 2018. Make sure to check the artwork out before they continue on their path around the globe.

This article was originally published on September 26, 2017.