Feasting on the native harvest.

We have lived by the assumption that what was good for us would be good for the world. We have been wrong. We must change our lives, so that it will be possible to live by the contrary assumption that what is good for the world will be good for us. And that requires that we make the effort to know the world and to learn what is good for it….For it is only on the condition of humility and reverence before the world that our species will be able to remain in it.
– Wendell Berry 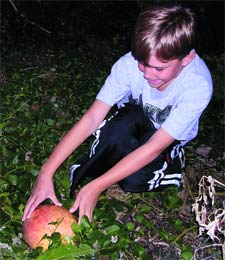 The first Thanksgiving meal in 1621 -the one attended by members of the English Separatist Church (Puritans), non-Puritans from England and Wampanoag Indians-was a decidedly local affair. Celebrated in the tradition of an English Harvest feast, the meal featured an array of foods the Europeans and Indians hunted, farmed and gathered from their immediate surroundings. In fact, the very meal itself was a celebration of the successful adaptation of the settlers to the local environment, with the help of those that knew it best-the Wampanoag. As a result, the meal featured foods found in northeastern North America at the time-fish and berries, venison and plums, lobster and seal.

Fast forward to the year 2006 and the items found on Thanksgiving table look very different from that first meal almost 400 years ago. And like much of American eating today, the feast seems to have become an exercise in importation, a celebration of overconsumption. We purchase Butterball turkeys raised and frozen in Arkansas, bake pies with sugar harvested and milled in the Caribbean, open cans of Ocean Spray cranberries trucked from across the continent to processing plants in Nevada.

But perhaps the Thanksgiving meal is about to morph back again into a more locally produced harvest celebration. Or at least that is the challenge put to students at Westminster College by professors Jeffrey McCarthy and Ty Harrison of the English and Biology departments.

“A project like this moves the students from abstract thoughts about the environment to the concrete questions of where exactly our food actually comes from,” says McCarthy, English professor and Environmental Studies chair. To this end, students of a combined English composition and environmental biology class create an entire Thanksgiving meal in the spirit of the original celebration. From the flour used to make the bread to the turkey placed in the center of the Thanksgiving table, the students cook and eat only foods that could be found within 100 miles of the Westminster campus in Sugar House.

“Creating a local food feast gives the students agency-it allows them to understand that they can make a difference through their own day-to-day choices. It also allows them to connect to the food chain directly and gives them a sense of environmental awareness,” says McCarthy. The exercise imparts students with a sense of civic consciousness, he says. It places them within a broader social context, allowing them to form relationships with farmers and producers and giving them a general interest in where their food comes from.

In a broader context, McCarthy and Harrison hope that creating a locally produced meal on campus will provide a model for the community. “Culturally, we are not taught to know where our food comes from. We simply say to the waiter, ‘I want a hamburger’ and it miraculously appears,” McCarthy says. “The same is true even in supermarkets. When you ask the person behind the meat counter where a product comes from, they look at you like you are crazy.”

But there are costs to that ignorance, he says. And teaching students to question where food comes from, who produces it and how it is used creates a different kind of consciousness in the community. Perhaps it will even serve to return Thanksgiving to its more humble origin  u

See these web sites to find local producers and farmers in Utah:

This article was originally published on November 22, 2006.