Eradicate or tolerate? Responding to bugs and blight.
-by Merry Lycett Harrison 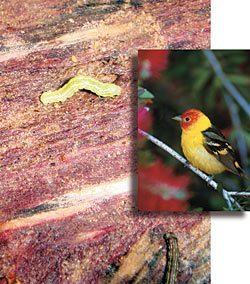 For the second year in a row, the tall trees above the raspberry patch have been infested with pudgy, neon-green worms that eat the leaves of the tree and then dangle down from thick webs. If they are not immediately consumed midair by a dive-bombing bird, they may continue to trapeze their way to the tops of the raspberry plants where they have just enough time for a brief nibble before another bird makes a meal of them. Robins nonchalantly peck at and pluck worms from the newly tilled garden soil while keeping an eye to the ground beneath the affected tree. The instant a worm drops on the mulch, they race each other, scurrying to the landing site to be the first to gobble up the delicious and substantial morsel.

The birds are gluttons for these worms, and their population increases during this annual infestation. During the day I sometimes have to duck to avoid a run in with them because there are so many on the established flyways through the yard. I love all the busy energy they bring to this riparian area. In the morning, the first chirp sounds at around 4:30. Then it is as if the birds agree it is too early and are quiet until an hour later when the sweetest notes and trills fill the dawn, every bit as loud and full as in a tropical rainforest.

Robins and sparrows galore provide the musical treat, but the visual treat is the newly-arrived, gorgeous, golden, orange-hooded western tanager who is attracted by the local menu selection. The other birds wait for the worm meals to present themselves on the web or falling to the ground; tanagers have a different technique. They perch in the branches of the tree and jump from one worm snack to the next. Sometimes I will see a whole limb of a tree shaking when there is no wind, and I can see the large, bright males and duller colored females lunging aggressively after the worms.

I suppose I should be alarmed at the damage these insects cause and should research some way to kill or get rid of the worms, but to be honest, I don't mind. The tree looks like it has weathered a category 4 huricane, but because its leaves have been devoured, more sunlight can shine on the berry patch. The brighter, warmer conditions coax plant starts to grow. All the raspberry leaves are spackled with white bird splatters, which I assume helps to fertilize the plants once I hose them off. Aside from the few leaves that have holes from the worms, the patch looks healthy and lots of blossoms are forming into small white berries, soon to be plump and red.

I called Millcreek Gardens to inquire what these grub-like creatures were that ate the leaves of certain trees. A knowledgeable man asked me lots of questions. He wanted to know what kind of tree was being eaten. I did not know but I told him that last year the worms shredded a box elder tree across the creek. With that he was very certain that the worm was the larvae of the elm leaf beetle. "It isn't dangerous," he said, and he assured me the infestation will run its course.

About three years ago, another bug invasion occurred. I was dismayed to see all the needles on some of our huge old pine trees gradually turn brown and drop off. The barren limbs curled down like an old hag's withered arms. The trees were obviously dying. I called the Forest Service to learn what the problem could be, and a representative came out for a look. She attributed the damage to the IPS beetle or engraver's beetle which eats the tree's cambium,  the inner layer of bark that transports the tree's nutrients to stay healthy and grow.

"Your other pines will be vulnerable to this bug, too." she said.

"Is there anything I can do?" I inquired.

"Sure, you can have the trees sprayed. It's pretty expensive but if you want to save your other old pine trees, it's the only answer," she answered.

"How toxic is it?" I asked. She did not have a definitive answer for this question so I asked, "Will any birds die?" "A few." she said. Having a son with asthma, I made my decision on the spot not to pursue the issue further. Thankfully, no more pine trees here died although many in the valley have been stricken with the same killer bug. Gradually, wild plum trees, Oregon grape shrubs, river birch and a new horse chestnut and white-blooming hawthorn tree have filled in  the sunny clearings created after the removal of the tall and brittle pine corpses.

So rather than deal with any of these small, opportunistic infesters, I have taken a passive approach and observed the full cycle of their comings and goings. Though the damage is significant, it is no longer worrisome. By biding my time and being willing to take a wait-and-see approach, I find that I and other forms of life have truly benefited in ways I would have never realized if I had chosen to make the effort to eradicate the pests. Just like last year, the infestation is winding down and will soon be over. The large elm tree will recover some of its leaves and the raspberries will ripen nicely. It is already quieter in the yard and there is less avian air traffic. I am certain that the birds have moved on to more delectable territory.

Merry is an herbalist and longtime creekside resident on Mill Creek in Salt Lake City. Go to www.millcreekherbs.com to learn more about upcoming trips into the wild.