A young archeologist gets his digs in early. 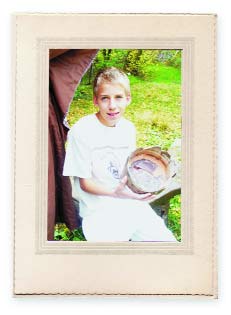 The other day, I asked my neighbor, Abram Sorenson, who lives just a few bends up the creek from me, if I could come for a visit to see what progress he was making on his backyard project. Years ago, he discovered that the slope from his house to the creek used to be an old pioneer dump, and ever since he has been carefully excavating it and documenting his finds. The site is so rich in artifacts that Abram’s work has caught the attention of the state archeologist, Ron Rood. Once seeing Abram’s meticulous records and natural ability, Rood extended him an invitation to participate in the ongoing dig on Antelope Island. Abram began his work four years ago during the summer after third grade. He is now 13 years old.

We walked across the yard to his worksite and sat on a bench under a tree to look at it. All the vegetation had been scraped off, and I could see remnants of a grid he had made. He told me how he began working using a pick and shovel. Removing mud and natural fill gradually and methodically, he has uncovered broken pieces of ceramic cups, saucers, bowls and plates, bottles used to hold food, medicine, perfume and beverages (whiskey, too), utensils, marbles, buttons, buckles, broken tools, animal bones, bullets and even a harmonica.

After gently washing each item, he recorded his discoveries in the logbook he began early in this process. He often drew pictures of his finds to illustrate and highlight identifying features of the artifacts such as stamped letters and numbers, names of manufacturers, symbols and logos.

Abram showed me his catalogue and research materials. He had a couple of huge, overstuffed notebooks bulging with copies of pages from books and downloads from the Internet. He had all the cardboard displays he has made over the years for school projects with handwritten descriptions like “pieces of porcolyn” with “Desighn.”

Abram showed me a large earthenware bowl of the type in which women used to make and knead bread dough that had most of its pieces held together with masking tape. Abram has pieced together hundreds of  household items and sorted them into categories like bottles, weapons, entertainment, food preparation and storage and clothing, He has it all catalogued and organized with historical footnotes and dates if he can figure them out.

By using his research to study the patterns and identifying markings on the broken pieces of china, Abram has been able to determine the dump was used from 1875-1900. Ron Rood is a bone expert. Most of the bones Abram has discovered were sawed by hand, and Rood believes some of the bones could date to the second half of the 19th century. Abram hasn’t found any Native American artifacts.

Abram has such a nose for archaeology that when he was 10 or 11 he and his friend Caroline Harrison found similar pieces of discarded homewares on the edge of their playground at school. Rather than play on the swings and tricky bars, they would dig into the treasure-filled hillside with sticks during recess. Abram got permission from the owner of the property on the other side of the fence to do further excavation. On the first day, he found 12 bottles in five minutes. They were blue Milk of Magnesia bottles that date from 1910-1920. Through his work, the site has become official dig, and Abram has since found vinegar, ketchup and alcohol bottles. The latter had the words “not for public consumptions” and the date “1920” embossed on the glass. Last March, he was very excited to find his first coin, a Canadian quarter.

When asked what his most thrilling experience has been as an archaeologist, Abram said it was on Antelope Island while he was helping at a dig believed to be a 1,000-year-old Fremont Indian hunting camp. Abram discovered a large, unbroken arrowhead. He nearly glowed with delight as he described its size, shape and reddish-brown color.

As for his future, I’ve heard archaeologist Ron Rood comment admiringly that someday he could find himself working for Abram, but Abram’s desire is to study Mayan archaeology. With his natural knack for archaeological discovery, analysis and organization, wouldn’t we be lucky if there were enough closer to home in Utah to interest him? Hey, folks at Range Creek, hint, hint, hint..

This article was originally published on November 21, 2006.