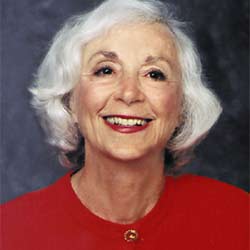 For the past three years I have had the privilege of producing KRCL’s progressive talk show, RadioActive. As we confront the world’s problems, it feels more and more like our social and environmental systems are being strained and exhausted to an inevitable breaking point. And yet, amidst the chaos, worry and fear, there are still voices among us that offer a new story and a new vision of what we could achieve as a species.

I recently had the opportunity to speak with Barbara Marx Hubbard. She is a futurist, social architect and spiritual pioneer. She is president of the Foundation for Conscious Evolution, and the author of “Conscious Evolution: Awakening the Power of our Social Potential.”

We’ve got about 14 billion years to cover and only an hour to do it. I want to talk about cosmogenesis – I want to explore conscious evolution and the social potential movement – but before we get into that, let’s talk about your story. Take us through your own emergence as a futurist.

Barbara Marx Hubbard: Well, I am a 77-year-old elder from the future. I was born in 1929, and the key event that turned me into a futurist was when the United States dropped the atomic bomb on Japan in1945. I was 15 years old. I was infused with the American Dream that power was good and that we were good. And it suddenly occurred to me that if we continued to use power like this, we could destroy everything. I asked a great question, “What is the meaning of our new powers that is good? Where are we going as a civilization?” And I found that nothing was written down. The power was so new that we didn’t know. So I became obsessed with a question. My husband, who I met in Paris, said he was “an artist seeking a new image of man, commensurate with our power to shape the future.” My desire is always to understand how humanity can do this. I founded the Committee for the Future to bring positive options into the future. In 1984 I ran for vice-president to bring into the political arena the projects, initiatives and ideas now working to heal and evolve our world. I was the other woman whose name was placed in nomination along with Geraldine Ferraro. I didn’t know what to do, Troy. It was too big, too much, too fast-and the current of politics changed the other way. So I began to work on the individual path of the co-creator: How do we begin to evolve as human individuals within a planet undergoing a crisis of devolution or evolution?

Can you describe what you call

Cosmogenesis is really the genesis of the cosmos – as the word says. The mystery is that it began before time and space, from a field of all possibilities, from the mind of God, from the Mystery, from the infinite intelligence of Universe. Out came the Big Bang about 14 billion years ago, and it began to create matter and animal life and human life. From my understanding, the intelligence that is creating all of this is not an external deity nor is it just accident, but it is an immanent creativity, the very subtext of physics itself to make more life and more consciousness. After Neanderthal, suddenly comes Homo Sapiens with self-reflective consciousness. We begin to awaken to the fact that we are part of something greater than ourselves. And recently through science, technology and democracy and an evolution of human consciousness, our species is awakening to the realization that we are the product of 14 billion years. In our atoms, genes and cells is the story of creation come alive. And we are at a stage of taking another quantum jump, as from pre-life to life, or animal to human. The difference is that we are taking this jump consciously, or we are going to self-destruct. Because the power, atomic and now nuclear, biotech and nanotech, is so great that if we don’t know how to use the power constructively, creatively and ethically, we can see that it will destroy our environment and ourselves.

When you say “quantum transformation” – can you give us some examples?

Yes. A quantum transformation is a jump from one phase to another, which would not be predictable from the phase before. For example in the seas of early earth you had molecules that became more and more complex. At some point there was a quantum jump to life – to the first self-replicating cells. That’s a quantum jump. Then if you imagine those single cells in the seas of earth, they are dividing to reproduce. They are very successful, but at some point there is a mutation and photosynthesis comes in and then multi-cellular life. That’s a huge jump from single cells. The next big quantum jump is a little creature they call Australopithecus africanus about 6 or 7 million years ago.

The origin of the potential of human life began and I think we are the midst of the next quantum jump, and that would be to a new species capable of co-evolving with nature and co-creating with the great mind of the cosmos. Homo universalis.

This is difficult for a lot of people to imagine – as it would be if we were Australopithecus looking toward Homo habilus or Homo erectus – to be able to envision that jump from each state seems improbable.

The great advantage is that we can look back. We can see the amazing miracle of life always evolving beyond its own limits. And as Teilhard de Chardin said, “when systems jump to more complexity, they jump in consciousness and freedom” — as from single cells, to animals to human, to Buddha and Christ and so on. I call myself a potentialist, not an optimist. There is no doubt in my mind that I am evolving. I have no doubt Troy, that you are a little bit more evolved then when we got started.

Well, yeah, probably. I would hope so! You call this the Universal Human.

Yes. We are becoming a more universal human, and we are creating a more universal humanity. I mean that really simply. The first step of becoming a universal human is very personal. You begin to shift your internal identity from a local, egoic personality – seeking something higher – to incarnating your own higher self as who you are. It’s a shift of identity from the separated human to the human incarnating essence. Once you do that, you are being born as a Universal Human. And then you have to move out and socialize and you begin to resonate. You begin to learn co-creation. The next big step in the emergence of the Universal Human is the development of life purpose. And when I say life purpose, I don’t just mean a job or profession – I mean a calling. And it seems to me, from everything that I’ve heard you say, Troy, you have a calling.

You are! Now where did that come from?

Yeah, I’ve been wondering that! When I was a kid I was really into X-Men comics. The characters are mutant superheroes who are the next stage of human evolution. As I got older I thought that was just because I was gay. But now, the more I’m reading your work and looking around and seeing everything in stages of collapse – my soul is saying we’ve got to move now, we’ve got to raise awareness. It’s inborn and it’s present.

It’s inborn. Now here is how I would interpret what you just said. You are a young Universal Human. The impulse of your vocation, your calling, your excitement, is the impulse of evolution itself localized as you. And as you begin to find life purpose, you begin to pick up the pattern of evolution as your own contribution. So you’re not standing outside evolution talking about it – you are evolution. And the more you say, “yes” to your life purpose, the more creativity you unlock.

Before I worked in radio, I was a real estate appraiser and I felt like I was dying with every house I walked into – but then when I tapped into what I was all about, then I had joy and fulfillment in the vocation of my choice.

As you find your life purpose, and you are motivated from within, you reach out to express yourself more fully. And to do that you have to find teammates because you can’t do it alone – and whether you are gay or straight doesn’t really matter. I call this “suprasex.” Sexuality gets us to join genes to have babies. Suprasex is the creativity that joins our genius. The innate expression of your own self drives you to self-expression, which drives you to find others in co-creation, and starts to excite you through vocational arousal. The way your body can evolve itself is through your creative self-expression.

What’s been happening to our culture since the atom bomb dropped?

Amazing things happened in the ’50s:  the discovery of the genetic code through Crick and Watson, the development of computers, the development of contraception so that women had rights over their own bodies. In the ’60s we had the great Apollo mission,  and we became extraterrestrial ourselves – we looked back on the earth and fell in love with our planetary body. The environmental movement woke up and the women woke up. We started to see that we needed an identity of equality, because women had been repressed for 5,000 years. And then there was the human potential movement, a huge opening of consciousness. And just to speed up now – the crises of the environment began to accelerate. And the crises of ethnic rivalries and WMDs and species extinctions. Threats to the actual survival to our life support systems began to accumulate as we entered into the ’70s, ’80s, ’90s and 2000s – until there are people saying, “I don’t think our species can make it.” Now I look at this potentially as a crisis of the birth of the Universal Species. We are one fraction of an evolutionary second away from destruction or a quantum jump. And I think the key right now is the increased connectivity of that which is creative.

What needs to happen now?

Say “yes” to that essence. Find your teammates and begin the process of co-creation. Put yourself into that 14- billion-year story of miraculous unfolding of ever greater consciousness – so that if you get depressed or discouraged, you can go within to that source of creation and realize that it’s evolving as You, now.

Stream the entire interview on RadioActive at www.krcl.org.  RadioActive airs M-F from noon to 1pm on KRCL, 90.9 FM. Check out www.barbaramarxhubbard.com.