Concept Art: The Art of Consumption

Christo plans a monument to the folly of oil.
by Diane Olson 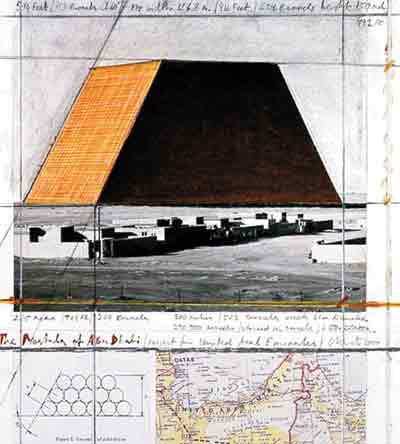 Given that the largest manmade structure on earth is a garbage dump (the Fresh Kills Landfill on Staten Island), it seems fitting that the world’s largest proposed art piece is a stack of used oil barrels that would dwarf the Great Pyramid of Giza.

Christo and Jeanne-Claude’s “The Mastaba: Project for the United Arab Emirates” was conceived in 1977, when oil cost $13 a barrel. Thirty-one years later, with crude now fetching $119 a barrel, and production long past peak, the Mastaba is the ultimate monument to our collective folly. Its form based on a type of trapezoidal tomb used in ancient Egypt, the Mastaba would consist of 390,500 empty, garishly colored, 55-gallon oil barrels, stacked 984 feet wide, 492 feet high and 738 feet deep. (By comparison, the Salt Lake Mormon temple is 118 feet wide and 107 feet tall.)

Christo began working with used oil barrels in the late 1950s, not because they were symbolic, but because they were cheap, large and unbreakable. He wrapped the first batches, after wrestling them to his seventh-floor studio on Rue Saint-Sénoch, in Paris. His largest previous oil barrel project was 1999’s “The Wall—13,000 Oil Barrels,” in Oberhausen, Germany.

Unlike most of Christo and Jeanne-Claude’s creations, which typically exist for only two weeks, and are as much event as art, the Mastaba would be engineered to last 5,000 years. Also atypically, the project would not be self-funded by the artists; should it come to fruition, the ruler of the United Arab Emirates, a Middle Eastern federation of seven states in the Persian Gulf, would pick up the bill, though Christo and Jeanne-Claude have already spent $1 million of their own money on preliminaries. The exact location for the Mastaba has yet to be finalized, though Christo and Jeanne-Claude visualize it on a slightly rising plane somewhere in the Arabian Desert.

Christo and Jeanne-Claude have been collaborating on art installations since 1961. They were born at the same hour on the same day in 1935, and have a son, Cyril, who is a poet. Christo creates the art and Jeanne-Claude manages the massive and complex installations, which typically require hundreds of permits. The couple is best known for projects such as wrapping the Berlin Reichstag and the Pont-Neuf Bridge in fabric, and for “The Gates in Central Park,” which hung there for two weeks in February 2005. Their next project is “Over the River: Project for the Arkansas River,” for which they will suspend 5.9 miles of fabric above the Arkansas River in Colorado, following the course of the river for two weeks in 2012.