Dance, Pray, Sing: A Musical Journey through Winds of Change

Dance, Pray, Sing: A Musical Journey through Winds of Change is an experience through an ancient and historical music timeline. Shelley Morningsong and Fabian Fontenelle will share the earliest beginnings of traditional Native American music and its evolution from the past to the contemporary sound of today.

Shelley (N. Cheyenne) is the 2019 Native American Music Awards “Artist of the Year” singer, songwriter, Grammy member, ASCAP member, photographer, and author. She has recorded seven sensational Native American Contemporary albums and has emerged as one of New Mexico’s finest Native performers. With an alto voice that pulls from the depths of her cowboy boots and songs with lyrics that cut to the heart, Morningsong will appeal to those who enjoy the music of Buffy Sainte-Marie and Bonnie Raitt.

Shelley’s husband and musical partner Fabian Fontenelle (Zuni/Omaha) adds a breathtaking and beautiful element to their performance with his traditional northern plains style dancing, storytelling, and drumming. Fabian is an original member of the American Indian Dance Theater, a choreographer, educator, and historian of Native American culture. Shelley and Fabian met in 2001 as they joined together on tour with Robert Mirabal’s Music from a Painted Cave, a long-running PBS special. Shelley and Fabian live in the Village of Zuni Pueblo in Northwestern New Mexico where Fabian was born and raised. Artist Bios

Don’t miss this immersive experience of sound, culture, storytelling, dance, and song. Tickets: $15 per person; children 12 and under are free.

This outdoor concert caps off the Solstice Flute School & Festival. For information on the School and Festival workshops visit solsticeflute.org. 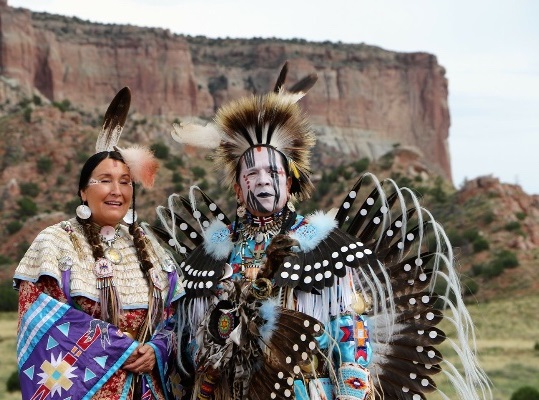