Back by popular demand

Cynthia Hill, Ph.D., a longtime Salt Lake City astrologer is now offering short-term (three to six sessions) psychotherapy in addition to her astrological readings. Hill practiced as a long-term Jungian depth psychologist for 25 years in both Cincinnati and Santa Fe. Since coming to Salt Lake City in 1996, she has practiced only astrology. The combination of Hill’s soul-centered astrology and her psychological expertise is a dynamic and alchemical combination that can help to reveal an individual’s deep psychological and spiritual issues quickly and insightfully. She is also available for medical astrology consultations, which work with mental and physical challenges from an energetic, cellular and spiritual perspective.

Got some time this weekend? Stop on by the newly reopened Salt Lake Citizen shop inside the Main Library. They’ve made some big new changes, including products from new artists, new ideas, and a massive new look for their digs at Library Square. Meet new owner Lindsay Frendt and catch up on everything that’s popping and hopping at the shop, which features 100% locally designed clothing, shoes and gifts, reflecting the best of all things local.

Matt Monson, SLCitizen’s former owner, recently made the difficult decision to sell the shop to Frendt. Monson says he’s excited to see the store and the local artist community thrive. He plans to use his newfound free time to focus on his other jobs and his adorable three-year-old daughter.

Frendt has been a designer and artist since she was 16 years old. She’s also a community activist, an active member of the downtown community, and a brilliant new face for SLCitizen. Monson will stay on as a consultant and all-around helper. “Believe me when I say that the future of local-made retail is in good hands with Lindsay,” said Monson.

Get to Know Higher Ground

Higher Ground Learning has found itself a new executive director, Billy Thomas, and he’s looking to enhance the tutoring center’s profile in the community. Thomas says that even though Higher Ground has been around since 1996, it’s still relatively unknown. Higher Ground never turns a tutee away, and instead turns every tutee over to a crew of “young, cool tutors who relate with their students,” said Thomas, who was previously a tutor and managing director at the center.

Higher Ground features classes in urban art, study skills, ACT/SAT, and one-on-one tutoring in just about every subject. And, every third Friday of the month they have a free gallery-style event called Student Art Attacks where they showcase student artists and their work. By inspiring what they call the “activation of curiosity” and embracing the whole student, Higher Ground hopes to inspire students to learn and share knowledge.

After a long career as a Maya abdominal massage therapist, Lucia Gardner is reinventing herself as an intuitive painting instructor. Gardner explains that intuitive painting doesn’t require any artistic experience. “You let the paints and the colors guide you,” she says. By manipulating paint on the canvas with your hands and feeling where the colors want to be and what they want to express, Gardner says people can access states and emotions often hidden.

She received intuitive painting training at the Wild Hearts Expressive Arts Teaching Training Program in Oakland, Calif. Gardner sees this career change as a natural extension of the deep healing work she did for 15 years as a body-worker and midwife. She will be facilitating intuitive painting sessions in an intimate studio space on her home’s property. Upcoming courses will be held on March 20, April 3 and May 15, 1p-4p. Six week courses begin on April 21 and April 23, 5:30p-8:30p 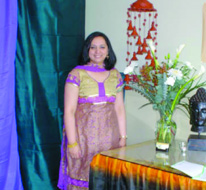 Located in the heart of Sugar House, in an intimate loft space above Tea Grotto, Sri Indya offers traditional and modern Indian clothing, shoes, exotic jewelry and other accessories for the entire family, as well as housewares, music and handicrafts. Select Bollywood-inspired earrings, bangles, rings and purses, or soft pashmina shawls to complement an existing ensemble. Or maybe an elaborate sari will be the purchase that makes your heart sing. Visit Sri Indya on Facebook to learn about in-store specials, new merchandise, or where to find a Sri Indya open house/party near you. Mention this article for 10% off your next purchase.