Thought vs. action: Which matters most?
by Jeannette Maw 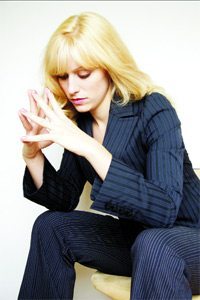 My neighbor doesn't believe in what I do for a living. If pressed, he'd say that not only is life coaching a ridiculous industry, but that trusting in the law of attraction is irresponsible and wishful thinking.

He's polite enough that he won't come right out and say it exactly like that to me, but he's not alone in his perspective. Plenty of people believe in order to get what we want, we have to go out and make it happen. That we have to roll up our sleeves and pay our dues to earn our reward; that sitting around talking about it, exploring our feelings about it and visualizing it is simply a waste of time. They would argue our thoughts aren't what make the difference – action is.

The latest research is beginning to show, however, that our thoughts are things that play a role in what happens. Author Lynne McTaggart compiles many of those studies in her book "The Intention Experiment," which raises eyebrows among even law of attraction skeptics.

Hard core proponents of the law of attraction tell us action isn't what makes the difference in getting what we want. They believe all that matters in what manifests in our life is what we vibrate. They take the opposite stance of my neighbor, saying that to make your dream come true you must simply find a way to achieve vibrational alignment with it, which is when the Universe delivers it. You don't have to figure out how to make it happen – you just vibrate it and it will happen.

In the middle of the road are other metaphysical practitioners who believe that thought alone won't get you anywhere, but that the combination of thought and action creates powerful change in our lives.

Who's got it right? Folks who believe action is what makes things happen? Those who believe thoughts alone create everything? Or those in between?

Well, we all do. Because we each create our own reality. We experience what we believe. But we each have the opportunity to choose our experience.

Those who believe we have to work hard and take action to get what we want will experience that. (Which is the law of attraction in action. "As you think, so shall it be.")

As an Attraction Coach who has worked with people from a wide variety of beliefs on the interplay of thought and action, I've learned much about what works and doesn't work in achieving our goals and desires.

Let's look at the role of thought and action to leverage what's possible for living the lives we want.

1.    Everything in the Universe is made of energy (including me and you and our thoughts).

In summary, everything vibrates, and like vibrations seek each other out.

With that in mind, how do thought and action work in our world? How can we best use them to easily and swiftly achieve our dreams?

The role of action

Let's look at the example of someone who wants to experience financial abundance. Most people who want more money have been trained to believe we have to earn it, and that getting more money means getting a raise, working more hours, picking up a second job or getting more clients. Some resort to reducing expenses, while others sign up for training or education to be more valuable in the work place. Still others rely on chance by participating in the lottery or visiting Wendover.

Are these actions effective? Is there a right or wrong way to approach financial prosperity? Although plenty of experts would sell you their formula for financial success, there is no absolute right or wrong action. Some things work for some people and not for others. That's because it isn't the action itself that makes the difference. It's how you feel about the action that matters most.

Which means your results in life aren't dictated as much by the actions you take as they are about your feelings about the action you take. The important question then becomes how does this action make you feel? No one can know that but you. Some people pick up a second job and feel empowered and on track; others pick up a second job and feel desperate and spiraling downward.

What we feel is what matters. That's what makes up our vibration, which is what the Universe answers. We're not awarded happy endings as a result of a price we pay or the amount of effort we expend or how much we've suffered in order to deserve it. It's simply a matter of getting what we vibrate.

So if we're going to rely on action to get what we want, at the very least we want to ensure the action we take allows us to vibrate alignment with our end goal. Otherwise, we're actually holding at bay the results we want.

The power of thought

Let's look at it from the standpoint of relying on thought (or vibration) alone in order to get what we want.

Some practitioners of the law of attraction have been taught we'll be handed all our dreams and desires if we simply believe them real. We're told the brain doesn't know the difference between what's real and what's imagined, so if we just imagine strong enough and long enough that we are rich, the Universe has to make it so.

And we need never leave the comfort of our couch in order to let it happen.

The problem for most of us is that it's a nice concept, but we've been so conditioned to believe action is required that believing in the power of thought alone is a little far-fetched. If we don't believe we can manifest money "magically" into our lives, it's not likely to happen. (But for those who DO believe – oh my! What fun they have!)

My experience with most people is that although we might want to believe we can think something into reality, we usually hold an element of doubt and disbelief about it. That doesn't mean it's not possible; it just means many of us haven't played with it enough to be there  yet.

Which is when it comes in handy to combine the power of thought with our reliance and belief in action. When we leverage thought to create a vibration aligned with the results we desire, and we take action that enhances that vibration, our creative power shines. That's when it looks to outsiders as if we were favored by the gods, living a charmed life where everything goes our way.

Taking the action we think will serve us often triggers an aligned vibration. For example, getting my dream job is easier for me to believe after I've distributed a resume, rather than just lying in bed fantasizing about my new career. That doesn't mean the action is what matters. It's what I'm vibrating that's key. But the action made it easier for me to vibrate alignment with what I want. And that's how I get it – achieving vibrational alignment.

In fact, very often deliberate creators find once they get their vibration lined up (by holding proper thoughts and feeling aligned emotions), they don't even have to take action before good things start happening.

For example, once my girlfriend changed her expectation about being dateable by deliberately reinforcing good thoughts about herself, she was asked out by a fellow student in her class. No action needed (other than showing up to class).

My ex-boyfriend's plumbing in his new house kept backing up every couple of weeks. The plumber reiterated in each of his half dozen visits (in as many months) that the problem wouldn't be permanently solved until he replaced the pipes. My ex changed his vibration to "perfect pipes" five months ago and hasn't had a problem since.

Another friend was struggling with his manager at work. As soon as he changed his mind about the situation and began deliberately feeling peaceful, appreciated and supported, he experienced an immediate and complete change in their interactions. Nothing changed but his energy. (He said it was spooky.)

Many of us approach our dreams backwards. We think we have to "figure out" what to do in order to get what we want. We think action is required and that's what we focus on. But if we never check in on how that action feels, we spin our wheels frustrating ourselves to the point where we often give up – or at least go at it the hard way.

Things go much smoother and manifest more quickly when we first get our vibration lined up (by thinking right thoughts and feeling good) and then taking inspired action. Have fun playing with your energy, getting it lined up with what you want first, and then check in on what feels good to do next. Combining the power of right thought and inspired action allows for really cool manifestations in your life. Have fun with it!

Jeannette Maw is an attraction coach and founder of Good Vibe Coaching in Salt Lake City. Free LOA resources are available at loaplayground.blogspot.com.