Crêpes, coffee and community: Plenty to shout about at Whispers Café.
by Emily Moroz

At 7:45 p.m., light is waning on a warm spring evening and about 30 folks have already filled the cozy nucleus of a new cafe on 11th East. As I lock my two-wheeler to a fence wrapped around an unmistakably spacious patio, a woman’s soulful voice and guitar float through the open door into the balmy outside air, and I’m immediately drawn in. Even if I hated coffee (which, for the record, couldn’t be further from the truth), the inviting aroma of espresso, chocolate and freshly prepared café fare inside Whispers Cafe is inviting. The Sugar House building (most recently Rumours Coffee Lounge) is well-suited for the outfit: central location, enough property for parking (and a drive-thru!) and that big, beautiful outdoor seating area. What’s refreshing about Whispers is the same feeling I got when I first stopped by; although less than four months old, this café already feels familiar. 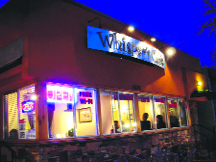 Tonight, it’s a fundraiser for the Utah Phillips Long Memory Project (www.thelongmemory.com), and Texan songstress Gigi Love is headlining. Along with Utah Phillips’ son Duncan, local musicians Kate MacLeod and Anke Summerhill join Love (in various musical arrangements) throughout the evening. A few women are packed like sardines onto a sofa in front of the singer, singing along, clapping and cracking the occasional joke. The crowd is a mixture of high school students, older couples, young “professionals” and an occasional passerby.

Whispers owner Samer Beseiso, who went to high school in Salt Lake, used to work at a huge, nationally recognized accounting firm, but had always dreamed of starting up his own thing. And then: “I got tired of looking at numbers on my laptop for 13 hours per day,” he says. Arguably, running a coffee shop ain’t easy work either, but it beats the boredom of office monotony, right? After a yearlong, unfruitful search for a place to open his cafe, Beseiso spotted the building with an eye-catching patio on 11th; it was love at first sight. About four months and countless remodeling hours later, in December 2009, Whispers opened its doors.

While traveling in Europe, Beseiso visited cafés that offered open, inviting atmospheres and served drinks (alcohol, espresso and tea) with a light selection of food. This je ne sais quoi inspired Whispers’ slightly upscale (yet by no means elite), local, clean aesthetic—minus the booze. Beseiso wants customers to feel taken care of. Whispers has plenty of comfortable seating and nooks and crannies for drink sipping, reading or laptopping.

In addition to killer espresso, lattes, coffee and tea, the Whispers menu boasts hearty panini sandwiches, a few of which are vegetarian (and the BLT can be made vegan). I wolfed down a delicious chicken ranch panini and a heap of potato chips. Beseiso and the Whispers crew try to use as many local and natural foods as possible without hiking costs—the sandwich easily could’ve fed two less-ravenous folks for just six bones. Their breads and mouth-watering selection of sweets (apple streusel, bread pudding, mousse cake and chocolate rum balls, to name a few) come from the Old City Bakery in Draper. A coffee lover, Beseiso carefully picked Star Mountain Roasting (Salt Lake) as their coffee purveyor; the Whispers crew creates its own blends. “As for everything else,” adds Beseiso, “we try our best to support our locals and local economy, because in the end, it benefits us all.”

And what’s this I hear about a vegan brunch? Believe your ears: It’s called the Tree Hugger Sunday Brunch and has already drawn a sizable, hungry crowd. Neighbors had asked Beseiso about veg-friendly options, and in good faith he gave it a whirl. Salt Lake is lucky to have quite a few vegan eateries, but aside from a granola bar or a crumbly brownie, your average coffee shop won’t usually offer a weekly smorgasbord of all-vegan grub. Most of the brunch credit goes to Char, a Whispers employee (who happens to be vegan) and co-creator of many items on the menu, including the berry crêpe ($5.75), Southwestern quinoa wrap ($6) and vegan garbage hash ($6). There are plenty of snacks, too—try the hummus plate for $4.75 or a yogurt parfait for $4. The popular Tree Hugger only happens from 9 a.m. to 2 p.m., so come early.

There’s plenty on the horizon for Whispers. Manager Barry Openshaw says they plan to host monthly fund­raisers in support of causes like earthquake relief in Haiti, breast cancer awareness, LGBT issues and the AIDS fund. Openshaw and Beseiso love events like the Gigi Love concert and realize how important it is for Sugarhouse to have a gathering place for artists, musicians, friends and neighbors. Beseiso had planned for his cafe to be such a venue before Whispers even opened, and has gained a lot of support from the community for socially conscious events. The magnitude of a beloved community coffee shop is unique; as Beseiso puts it, “That’s why I named [the cafe] ‘Whispers’—the ‘vibe’ you get while you’re here can’t be described in words…it only arrives as a whisper in your ear.” Pssst—can you hear that? Go check it out!