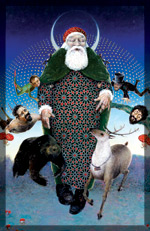 Jothi Duggineni has three babies: a seven-year-old son, a two-and-a-half-year-old daughter, and a nearly two-year-old restaurant. “We opened on July 29, 2007,” she says, from across the table near the window with the golden silk curtains. Jothi is owner of Tandoor Indian Grill located in the burgeoning neighborhood business area of 3300 South. She is also the restaurant’s hostess, server and chef. 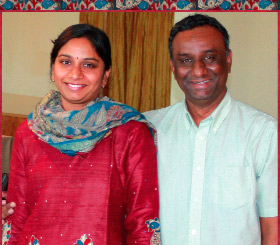 Despite the stress of having three “children,” Jothi retains a certain lightness about her, almost an aura of youthfulness. Dressed in modest Indian-style pants and a long shirt, she flows between the tables in the half full restaurant. She smiles at everyone she sees-a beautiful smile in a soft, round face.

Her husband, Raj, has the same calm, gentle smile, even after an entire day at work. Tonight he joins us for a moment before gathering his children and taking them home. “My husband is professionally a software engineer,” Jothi tells me. “In the first few months of us opening he would put in an eight-hour day at the office and then come here and work until 11 or 12. Now he takes care of the children at home while I am still at the restaurant.”

Tandoor is obviously a lot of work for this couple, but they are up to the challenge. For Jothi it is a way to retain her culture. The couple met in their home state of Andra Pradesh in southern India. They moved to the U.S. in 1999 for Raj’s career.

“At first my visa didn’t allow me to work,” Jothi says. “I spent most of my time cooking food for my husband. Then I started trying cuisines from different countries.” Eventually, Jothi realized that although Salt Lake had good Indian food, the southern cuisine was less well represented.

Jothi has filled that void with dishes such as Tandoor’s Special Pumpkin Masala, a grilled butternut squash sautéed in Indian spices. Jothi would be surprised if any other restaurant has this dish. “It is a recipe I took from my mother and my aunt.” The dish is made of small, savory cubes of soft squash with touches of cilantro and hot pepper and has turned out to be a taste that most of her customers enjoy. Its popularity took Jothi by surprise. “I was pleased to find that Americans are great lovers of pumpkin.”

Another dish that guarantees a unique dining experience is the southern specialty masala dosa, a gigantic crepe served rolled up like a scroll, so large it hangs off each end of the serving plate. Made entirely of lentil flour, the batter is cooked on a hot griddle and served with ginger, coconut and spicy tomato sauces.

The lunch crowd brings in business people and staff and patients from the nearby St. Mark’s Hospital. In the evenings, Tandoor still has a majority of Caucasian clientele but serves the Indian community as well. Jothi says she has not had to alter her foods much to appeal to her audience; Indian food is designed so that one dish can suit many tastes.

Jothi takes care to assure that all the flavors found in her restaurant are fresh, authentic, and delicious. All the curries are made inhouse from scratch and dishes can be ordered to the desired heat.

Maintaining this authenticity remains at the heart of Tandoor, from its curries to the Ganesha (lord of success) statue placed near the entrance. Jothi looks around her at the large rectangular room filled with tables and dreams a bit out loud. “I want good Indian art in here,” she says. “I don’t want to compromise, but we have to wait till we are a little more steady on our feet.” Jothi also sees other improvements in the future like live Indian music and Indian holiday celebrations. She remembers with pride Governor John Huntsman’s visit to last year’s Indian New Year celebration held by Salt Lake’s Indian community. She would like to use her restaurant to welcome everyone to enjoy some of the best parts of the southern Indian culture.