An interview with the owner, Avtar Singh.
by Mandy Jeppsen 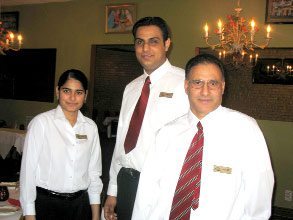 Just after midnight on June 28, 2005, an intentionally-set fire began to unfurl on an unsuspecting Salt Lake City. By 1 a.m. the orange terror had raged through downtown's Stratford Hotel, destroying all in its path, including the apartments of nearly 50 people and two prominent businesses. One of those businesses, the Star of India Restaurant, re-opened last January at a new location on 400 South between Main and State streets. Though it took almost a year and a half, it was certainly worth the wait.

Originally from Punjab, India, Star of India's owner Avtar Singh is a soft-spoken man. He is humble when asked about his life story, but he speaks up proudly when addressing his restaurant. "We put a lot into this new location," he says. "It has been completely remodeled; the atmosphere is comfortable, and customers can really relax and enjoy themselves here."

Singh emigrated to the U.S. 24 years ago. He first moved to California to work for a relative at a restaurant there, but he always wanted to start a business of his own. He traveled to Utah to inspect an Indian restaurant for sale, and the rest is history. "I came to Salt Lake, and after looking at the Star of India, I knew I would buy it." That was 1995, and all was going smoothly with his venture until the fire destroyed his Star. He doesn't really talk about it much, only to say that he is a person who looks forward, not back. He has moved on.

I must admit I had only frequented the Star of India a few times at the first location. As I recall, I enjoyed the food, but I wasn't a regular. These days, I'm wondering what I might have missed. After sampling the scrumptious buffet, I'm going to have to make this a regular stop on my dining rounds.

First, I tried the saag paneer, a basic Indian dish. I have to say, I've never tasted a better version than this- very rich, not too spinachy. I move on to the chicken shahi korma, another basic, chicken cooked in cream sauce with nuts and raisins. Delightful. I tried three veggie dishes: navaratan korma (veggies with cheese and nuts in a cream sauce), bengan bhartha (eggplant with tomatoes and peas in a tomato sauce) and chana masala (chick peas with tomatoes and potatoes in a tangy sauce). I'm in heaven. These are the best vegetarian Indian dishes I've ever tried. The Star serves a tasty keema matar (lamb simmered with peas, onions and spices) and a delightful chicken curry, but I am a believer because the vegetarian dishes taste so amazing.

As I prepared to leave, I asked Singh if he misses India. He pauses for a minute, and looks up to think. "Utah is home. Well, downtown," he laughs. He says he doesn't really miss India; he has grown roots here. He points to his daughter Parmjit working the register, and to his nephew Anoop filling a water glass, and I realize that it may have been a silly question. After all, Singh never looks back, only forward.
Star of India validates parking for all customers. Park in the Wells Fargo lot across the street on 400 South or in the lot at 324 S. State.