Twenty five years ago, Salt Lake had not one place to get a decent cup of coffee, let alone a fully operational roasting establishment. Ignoring those who said it would never fly here, chef John Bolton opened Salt Lake Roasting Co. (fondly referred to as the “RoCo”) in 1981. To the surprise of many, supply met plenty of demand. Since then, the Salt Lake Roasting Co. has been a coffee mainstay, and many Salt Lakers consider it still the best place for a cup of joe-or a pound of beans, often organic, shade-grown and fair trade. What’s more, there’s an under-the-radar abundance of goodies on their menu that will alleviate not only your headache but your hunger, too.

The rich desserts on display are completely the purview of Roasting Co. head baker Dave Wheeler. The cafe’s bakery case shelves are stocked with decadent cakes that would impress any confection connoisseur. Wheeler grew up in Millerton, PA, a one-stoplight kind of town. He’s always enjoyed the culinary arts, but it was his mother’s cooking that inspired him to be a chef: “It was awful; it would kill you,” down-to-earth, friendly Wheeler quips.

Wheeler has been a baker and chef for nearly 30 years. On a high school trip to the Canadian National Exhibition in Toronto he witnessed a chef’s demo; after, he told his guidance counselor he wanted to be a chef. She thought he meant cafeteria worker. Small town misunderstandings lost out, and Wheeler ended up at the Culinary Institute of America in Hyde Park, NY, then apprenticed at upscale Pâtisserie Bonte in NYC’s upper east side. Owner Maurice Bonte was pretty no-nonsense with his employees, says Wheeler. His two and a half years there were a good experience, but it wasn’t for him, and he left the East for a job in L.A. You know the rest of the classic tale: Headed west. Stopped in Utah for some skiing. He’s been here ever since. 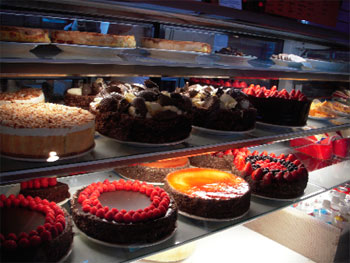 Wheeler enjoys his work at the Roasting Co. because of its humble, honest approach to quality food and coffee. It’s hard to imagine feeling unwelcome at this café, a re-purposed warehouse with high ceilings, two stories (with a fabulous staircase) and plentiful seating. Students crank out papers on their laptops next to grandparents enjoying dessert with their family. This sense of unpretentiousness is one reason why Wheeler says he came to the Roasting Co. in the first place.

Wheeler and the Roasting Co.’s full-time chef, Kevin Frantz, make a dynamic duo prepping food together. “Yeah, we work together; he stays on his side and I stay on mine,” jokes Wheeler, but it’s apparent there’s a jovial sense of humor wafting around the kitchen.

Frantz has been a chef at the Roasting Co. for four years. He grew up in Buenos Aires, Argentina, and remembers lots of time in the kitchen cooking “good ol’ fashioned English meals” with his grandmother. Frantz came to U.S. when he was 18, visited Utah to (not surprisingly) ski, and has been here for 25 years now. His first jobs were at Snowbird as a dishwasher at Golden Cliff and the Mexican Keyhole, but he’s had no formal training. Frantz met John Bolton through some friends, and has been working with Bolton to create unique daily specials since. Bolton comes up with the “regular” menu items-the quiche, soups, salads and deli bar-and Frantz creates four special dishes each day. Recent specials included pasta in a creamy roasted pepper sauce with crispy vegetables and garlic bread, and Greek chicken with roasted red potatoes. A CATALYST reader sitting nearby raved about the homestyle lasagna, and two gentlemen on a business lunch were savoring the polenta and fish tacos.

They keep it real at the Roasting Co., too. “We buy all our products raw and start from scratch,” says Wheeler, “and we use the best ingredients we can get our hands on; no preservatives, only the best stuff.” Display cases are stocked with croissants, fruit tarts, cookies, triple berry whipped cream cake, raspberry and strawberry chocolate mousse, an incredible fruit liqueur-coated concoction, and hearty cheesecakes. “If you don’t have these [standards] at all times, people get upset,” says Wheeler about their “classics.” The Roasting Co. baker makes two or three new kinds of cake every week, “but it’s good to have the classics.”