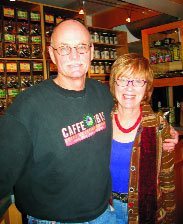 When you follow your passions, you can do great things. Take husband-wife team Randy Wirth and Sally Sears as examples. Pioneers of the Utah organic food and coffee industry, the two have built their business, Logan’s Caffe Ibis, for 25 years, maintaining an infectious enthusiasm for sustainable business, organic food and social activism. One needs only to buy a bag of their locally roasted coffee beans to get a sense of who they are. The back of each bag reads “Cafe Ibis is proud to be an award-winning ‘Green Business’ with a focus on consistent quality. We have a strong commitment to social and environmental responsibility, both locally and globally.”

Caffe Ibis (named after the marshland bird that migrates to Utah each spring) originated as a health food store called Straw Ibis Medicinal and Culinary Herbs. Wirth and Sears, originally from San Francisco and New York, had met in Logan at an anti-war demonstration. The two discovered a love for the simple life, and after marrying (theirs was the first Quaker marriage in Utah), they purchased Ibis in 1972.

Sharing her love of organic foods and cooking, Sally taught cooking classes at USU and began expanding Ibis offerings to include bulk grains, locally made tofu and home brew supplies —but she and Randy soon found that their best-selling item was coffee. “In the early ’70s most coffee was heavily grown in pesticides, but we focused on specialty coffees,” Wirth explains. “Back then, there were no certified organic coffees. We were a part of the original group doing that.”

A long-time dabbler in roasting, including some informal training in the early days from roasters at Peet’s Coffee in Berkeley, and at Starbucks in Seattle, Wirth bought a roaster in 1990 and began experimenting in the back of the store. “It used to be a lot more open in the old days, it was like home beer-making; everybody shared their ideas. At the Roasters Guild, we still do that; we compare notes, and share ideas, but the industry is guarded in general because it is highly competitive.”

As Wirth’s knowledge grew, so did the business. He and Sears found themselves at the frontier of the organic coffee movement—traveling as far as Peru to meet the farmers and to learn first-hand how the business works.

Now, Ibis serves and roasts only triple-certified coffee meaning that the beans are certified organic, Smithsonian shade grown, and fair trade. It’s a big deal, because many companies claim to distribute shade grown or organic products, when in fact, that isn’t the whole truth. For instance, Smithsonian certification requires that the rainforest be left intact, and that coffee is grown within the natural clearance. Some companies tout shade-grown coffee when, in fact, they’ve clearcut the forests and simply planted new trees to grow beans. The result is not only ecologically unsound, but the coffee is inferior to the heirloom variety. Sears says that by using triple certified beans she and Randy can make a small planetary impact. “We have the ability to vote daily with our dollar,” says Sears. “Every time you put a dollar on the counter, you’re making a conscious choice. You’re protecting the planet, supporting people, supporting social justice. Or you’re supporting economies that aren’t sustainable.”

Ibis offers much more than coffee. With over 100 varieties of tea, pastries and homemade menu items including hummus sandwiches, Asian veggie wraps, potato salad, fresh soups, salads and a tasty breakfast menu, the cafe is worth a stop. If Randy and Sally happen to be around, the conversation is always intriguing, so introduce yourself.