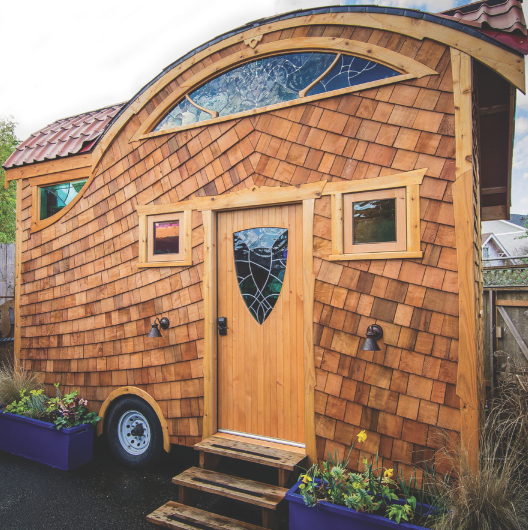 “I am a minimalist,” says Cynthia Wong, a witty, passionate and tenacious woman who is, to date, the most successful advocate for tiny home living in the state of Utah. “I’ve had dreams of living in a tiny home for seven years now and if there’s anything related to tiny homes, I will show up. Really, my love of them comes from a sense of adventure… and not liking stuff too much.”

These days, tiny homes are a Pinterest and reality television show phenomenon (Tiny House, Big Living; Tiny House Hunters; Tiny House Nation). And in case this trend has passed you by, here’s a little explanation of a tiny house: Picture something in the range of 200 sq. ft., but not a mother-in-law cottage (more portable) and not an RV (more stylish, think rustic wood or modern steel siding). Inside, a lofted bed, a composting toilet, a fold-out table, an electric wall heater. There are lots of tiny homes and endless designs, so they aren’t all exactly the same, but you get the idea.

For the most part, tiny houses are a relatively cheap housing option, normally costing in the range of $40,000 to build. But where do you put them? Most U.S. cities, including Salt Lake City, are wary of allowing tiny houses to move into backyards and driveways. In Utah, the only city with an Accessory Dwelling Unit ordinance that allows tiny homes as legal live-in residences is Pleasant Grove, a small community (population 33,500) in, of all places, Utah County. This accomplishment is thanks to Wong.

A resident of Utah County, Wong knew that Pleasant Grove encouraged accessory dwellings, like studio apartments above garages and mother-in-law apartments, as a solution to the city’s growing need for housing. Seeing this as an in-road for tiny houses, Wong, who had learned about zoning laws and ordinances regarding tiny houses while attending a national convention, drafted a proposal and set up a meeting with Ken Young, the city’s community development director and a few other city employees.

“We were all crammed in the city council room and I’m pitching the idea, just being myself,” recalls Wong, “but it was kind of intimidating. They were stone faced. It didn’t seem to be going well.”
Eight months after their meeting at the city office, Wong received news that the next council meeting would included a review of a new ordinance for tiny houses.

“They were totally overwhelmed,” says Wong, recalling the astounding number of people who attended the meeting in support of the new ordinance.

During the period for public comment, Pleasant Grove officials heard testimonials from people who saw a tiny living as an answer for housing aging parents, or poor college students. She says not a single voice in opposition was sounded. “They voted on it right there,” Wong recalls, “and it passed unanimously.”

Almost a year after passing of the new ordinance, Wong still doesn’t know anyone in Pleasant Grove who lives in a tiny house. “The tiny house thing is a great idea, but you need the right lifestyle for it,” admits Wong. “My daughter is open to a tiny house. But my mom, [who Wong also lives with], she’s a hoarder. She sees the tiny house thing as more of a hobby.”

It’s more than just family life keeping Wong from fulfilling her dream. A number of restrictions also make the new ordinance less than ideal. To be legal housing units, Wong says, the city has required that tiny houses have their own parking space and be located behind an existing structure. The most frustrating part of the ordinance, for Wong, is the requirement that these dwellings must be on a foundation just like a normal house.

Affordable housing is in short supply in Salt Lake (and in most growing urban centers in the country) and is a top priority for the city. Tiny houses, say advocates, are one way to address this need. But, for some reason Accessory Dwelling Units (like tiny homes) are one thing that really get cities’ panties in a knot. Salt Lake and Pleasant Grove aren’t the only municipalities with strangely prohibitive ADU requirements—some cities, for instance, only allow family members or caregivers to live in ADUs.

Pleasant Grove has joined a growing list of cities around the country that are opening the door to this housing alternative, but working out a compromise for what best fits the needs of citizens and cities will take time. Every city’s rules are a little bit different, but it also means that ordinances can shift with changing needs and demands.

“I really believe they want this to succeed,” Cynthia Wong says of Pleasant Grove. “And I can see that they are balancing our desires with safety.”

Removing tiny houses from wheels is a sticking point for a lot of municipalities—probably a fear of seeing the tiny house movement grow out of control, turning driveways into RV parks. But wheels, says Wong and many of her cohort, are essential to the tiny house way of life.

“It’s understanding the lifestyle,” she says. “Wanting a small house is the American dream to be free and go where you want. When I explain it, I don’t know what they hear, they must just think it sounds whimsical and quirky.”

TAKE ACTION
Want tiny house living to be a reality in Salt Lake? This summer Salt Lake’s City Council may be amending the Accessory Dwelling Unit (ADU) ordinance, creating some changes that could make it easier to live in a tiny house.

Currently, many restrictions govern ADUs. They are only allowed within half a mile of a fixed transit (Trax or streetcar) stop. There are height restrictions and square footage restrictions and lot area and parking restrictions. Since 2012, the city has been intending to review those requirements and make adjustments. This summer, it is back on the agenda.

Lots of tiny house enthusiasts have already been weighing in on the ADU amendment and you can, too. One place to start is with the Salt Lake City Planning Commission. This appointed group of volunteers will be reviewing the law and giving their proposal to the City Council who will be the final decision makers. Find the list of Planning Commission members at SLC.gov or go to one of the public bi-monthly meetings (2nd and 4th Wednesdays, 5:30 pm, City and County Building). You can also contact your City Council representative, and keep an eye out for when the ADU makes it onto the city agenda, planned for mid-summer.

This article was originally published on June 1, 2017.