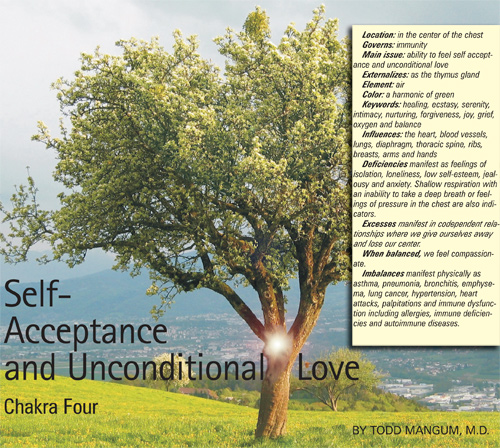 The energy of the fourth chakra is easy to feel. Unfortunately, it becomes obvious to many people only when they experience the breakup of a desired relationship or the loss of a dream. The pain they feel in the center of the chest is what we call a broken heart.

Through the crown or seventh chakra, we connect with the cosmos, the home of the divine masculine. Through the base or first chakra, we connect with the earth, the home of the divine feminine. Only through the heart chakra, the center point of the seven chakras, can we manifest the totality of our divine energy. The heart, not the head, is the portal through which we can both return to and become Source once again. Through the heart, we experience ecstasy.

The endocrine gland which interfaces with the fourth chakra is the thymus gland, located behind the sternum. It regulates the immune system by secreting hormones which include thymosin and thymopoetin. These hormones stimulate certain white blood cells, the immune system’s living defense network, to migrate to the thymus where they mature and develop the ability to protect against and resolve infections and cancers.

The immune system also includes the lymph nodes, spleen and bone marrow. Found throughout the body, these nodes act as filters that detect and remove potentially harmful substances from the lymphatic system. The spleen acts as a giant lymph node which filters blood instead of lymph fluid. Both red blood cells and white blood cells originate in the bone marrow.

White blood cells (WBCs), also called leukocytes, help the protect the body against infection. A routine blood test called a CBC measures the total number of WBCs, which is an indictor of immune function. A high number usually indicates an acute infection but can also be a marker for certain cancers like leukemia. A low number often indicates some sort of immune suppression—a common finding in HIV infection, AIDS, and chronic fatigue and immune deficiency syndrome (CFIDS).

WBCs are divided into five categories which include lymphocytes, monocytes and neutrophils. Monocytes develop into cells that roam the body engulfing unwanted visitors and cleaning up after other immune cells have neutralized the danger. Neutrophils are especially important in the defense against bacteria. Lymphocytes, perhaps the most interesting of all, are particularly important in our defense against viruses.

Lymphocytes retain the memory of what we have been exposed to in the past. They confer future immunity against illnesses like the measles and chickenpox once we have had the illness or been immunized. Lymphocytes are classified as T cells and B cells. T stands for thymus, which is where these cells mature. T cells are predisposed to respond to specific foreign substances called antigens, and are responsible for the intense reaction that occurs when we become sensitized to substances like poison ivy. Helper T cells, also called T4 or CD4 cells, produce chemical messengers like interferon which tell other immune cells what to do. Their numbers decline dramatically in people with AIDS.

B cells produce antibodies which are also called immuno­globulins. Antibodies are proteins which target or flag antigens for elimination. Immuno­globulins are further divided into subsets which include IgG and IgE. IgE causes the immediate and sometimes life-threatening allergic reaction people have to certain foods and substances like bee venom. It also causes hay fever. IgE causes the release of histamines which is why we use antihistamines to combat allergies. The routinely used skin prick allergy tests measure this kind of reaction.

IgG can cause immediate allergic reactions, but more often reactions involving it are delayed for hours, sometimes even days. Most food allergies are mediated through IgG. The skin prick allergy test will not pick these allergies up. Many people who have this skin test done will be told they are not allergic to certain foods when in fact they are. A simple blood test is available which measures both IgG and IgE reactions to over 100 different foods and spices. It is a good test to do for chronic problems like digestive disturbances, skin rashes, fatigue states and sinus problems.

Interestingly, many people who suffer repeated infections often also develop numerous allergic reactions. It is as if a chronically stimulated im­mune system exhausts its ability to defend effectively against infections, yet overcompensates by attacking everything else, including the body itself. The end result can include worsening food and environmental allergies, eczema, autoimmune conditions and lingering infections. All of these skirmishes require enormous energy and often leave the person exhausted.

Fortunately the herbal and nutritional world is full of solutions to address this perplexing set of circumstances. The celebrated Chinese tonic herb astragalus and the tonic mushrooms Ganoderma, grifola, polyporous and tremella are frequently used to treat chaotic immune systems. Pharmaco­logical evaluation has shown these particular herbs contain polysaccharides which have immune-regulating properties. Polysaccharides are long chain sugars which exert an activating and normalizing influence upon both T cell- and B cell-regulated immunity. In addition to their ability to enhance resistance to viruses, bacteria, yeast and parasites, they have anti-inflammatory, anti-allergy, and anti-carcinogenic properties. Quercitin, a bioflavonoid commonly used to treat allergies, has also demonstrated antiviral properties. It should be taken with bromelain to increase its absorption. Adequate vitamin C, zinc and selenium are also essential for proper immune function.

Breath is the key to opening the heart chakra, energizing the body, clearing emotions, increasing mental clarity and accessing expanded states of consciousness. Most spiritual traditions of the world equate the breath with the universal life force. It has been called qi by the Taoists, prana by the Hindus, and mana by the Hawaiians. These traditions and many others have all developed conscious breathing exercises in order to transform themselves and enter states of bliss and ecstasy.

Activities to open the heart will also help regulate the immune system. Sign up for a transformational breathwork class. Laugh a lot. Volunteer for a cause dear to your heart. Go to the mountains for breath of fresh air. Celebrate Earth Day. Plant a tree. Buy more plants. Fill your home with green eco-friendly products. Give generously and receive graciously.