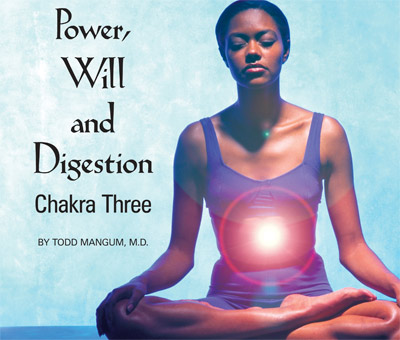 The power and purpose of the first, or root, chakra is to ensure our safety, security and survival. The focus and force of the third chakra, however, is to empower us with a daring, indom­itable will. and courageous self-confidence. In other words, it can help us become someone who has “guts.”

This center is also receptive to the impulses that inform our “gut instinct,” knowing without knowing why. This energy will be experienced as the “butterflies” or “knots” in our stomach, especially when we’re nervous and not quite sure of our power.

When the third chakra is balanced, we feel confident without having to be controlling, and our metabolic fire will burn brightly, providing adequate stamina and warmth.

The endocrine gland influenced by the third chakra is the pancreas, which secretes the hormones insulin and glucagon. The pancreas also produces numerous digestive enzymes and neutralizes the extremely acidic contents of the stomach.

Insulin is secreted in response to rising blood sugar levels. Insulin facilitates the transformation of glucose into triglycerides which get transported for storage inside the cells. Excess insulin increases hunger, inflammation and mental confusion.

Although type I and type II diabetes both cause high blood sugar levels, they are vastly different disorders. A deficiency of insulin causes type I diabetes and requires lifelong replacement. Type II diabetes results from having a fine-tuned metabolism that cannot handle foods which cause a rapid and extreme rise of blood sugar leve1. Metabolic syndrome is the forerunner of type II diabetes. The current designation metabolic syndrome has replaced Syndrome X, reactive hypoglycemia, hyperinsulinemia and insulin resistance as the official name of this condition.

Metabolic syndrome causes the body to produce ever-increasing insulin in order to regulate blood sugars. Initially, the repeated spikes in insulin, not glucose, cause the problems.

Patients with elevated cholesterol and/or triglycerides, hypertension, unexplained weight gain or a family history which includes diabetes should be screened for metabolic syndrome. Both fasting insulin and glucose levels need to be tested. The values considered normal for a fasting insulin range from 6 to 27. In my experience, an upper limit of 27 is much too generous. Anyone with insulin level over 12 and/or a glucose level over 95 should be tested more thoroughly

Metabolic syndrome is diagnosed when a patient is found to have an elevated insulin level either while fasting or during a glucose tolerance test (GTT). The diagnosis also requires a patient have high blood pressure, elevated fasting cholesterol or triglycer­ides and an inflammatory condition such as arthritus.

Caught early, metabolic syndrome is one of the most treatable disorders. It really isn’t even a metabolic disorder at all, it’s a dietary disorder. If you discovered your car was having problems because you were using diesel when in fact, it needed premium unleaded, would you still try to fix the car or simply change the fuel?

Adequate amounts of nutrients like chromium, vanadium, L-carnitine, vitamin E and magnesium are essential to assist the body’s metabolism of glucose. Dietary changes are fundamental in treating glucose metabolism problems.

Another important function of the pancreas, as well as the salivary glands, stomach and intestinal lining, is the excretion of digestive enzymes. These include protease, amylase, and lipase which break down protein, starch and fat, respectively.

Digestion begins in the mouth with chewing and the release of amylase. The next step takes place in the stomach where hydrochloric acid (HCl) is released. HCl catalyzes the conversion of several digestive enzymes into their active form and creates a hostile environment for unwanted bacteria and other organisms. Often, heartburn is caused by too little stomach acid, not by too much. When too little HCl is present, all the processes of digestion are hampered, and food stagnates in the stomach. This can cause acid re­flux, which means the food and acid in the stomach come up into the esophagus, which has no protective lining like the stomach. Caffeine, chocolate, alcohol, smoking, overeating, eating shortly before bed and drinking ice water or excesive liquids with meals aggravate this condition. Antacids and drugs like Tagamet, Zantac and Pepcid will help the symptoms of the burning, but often they will do nothing resolve the core problem. By diminishing HCl production or function, these drugs further weaken digestion, setting the stage for nutrient deficiencies, worsening food allergies and bacterial fermentation of incompletely digested food.

Symptoms of low HCl include many of the digestive disturbances listed earlier plus a sense of fullness after eating, nausea after taking supplements, rectal itching, iron deficiency unresponsive to supplementation, recurrent intestinal infections and brittle nails. If you suffer many of these symptoms, taking HCL with additional digestive enzymes can provide amazing relief. If HCL aggravates your condition, you have too much stomach acid and you will need another treatment strategy.

Digestive enzymes are derived from both plant and animal sources. I believe the plant enzymes to be a better choice for long term use. With any chronic digestive problem, it is always important to rule out parasitic, yeast or bacterial infections, malignancies and inflammatory disorders. Screen­ing for hidden blood in the stool and blood tests which can detect liver and gallbladder problems are also important.

Through the third chakra we begin to access the astral planes, which are simply more subtle frequencies of energy than experienced through our five senses alone. This is also the center through which we get “hooked “or try to “hook” others. Everyone has experienced the feeling of being drained following interactions with certain people. These people have literally tapped into our solar plexus in an attempt to feed their own depleted reserves or to manipulate a situation. We may have also attempted to force them to follow our will. In either case, exhaustion is often the end result.

Activities that enhance your sense of personal power will help you maintain a vital and radiant third chakra. Enroll in a martial arts class. An exercise called woodchoppers will help you safely release pent-up frustration and anger. Stand with your feet shoulder width apart. Clasp your hands together. Raise them over your head and swing toward the ground as if chopping wood. Do this with force while letting out a yell. Repeat until you feel complete. Light a fire and meditate while gazing into the flames. Watch the Sun rise with gratitude for the light of consciousness and energy it so generously provides.