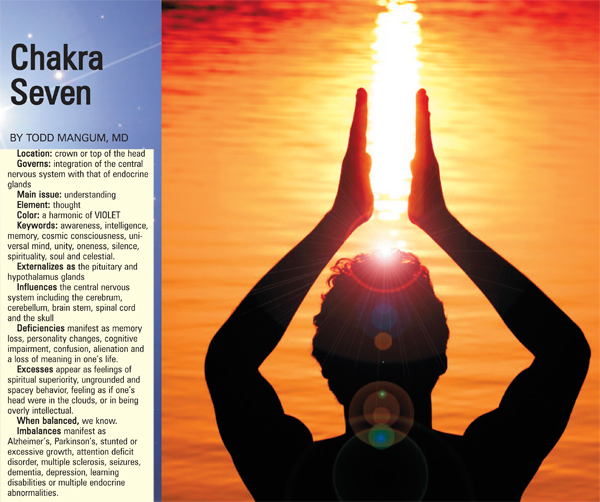 The Sanskrit name of the seventh center is “sahasara,” which translates roughly as the thousand-petaled lotus. The first chakra anchors the roots of our being within the Earth. From the seventh (crown) chakra flowers our consciousness, with which we can become aware of and begin to comprehend the cosmos.

On crystal clear nights with my feet planted firmly on the ground and looking toward the heavens, I often contemplate our place between the atoms and the stars. The magnitude of both boggle my mind. On rare and special nights, I really understand how we identify ourselves; our individuality is only a matter of perspective. Where does the autonomy of each of our individual cells end and where do we as humans begin?

We are the omnipresent energy fields of subatomic particles. We are the atoms which form the molecules which link to become the cells we identify as life. We are also the single-celled organisms which coalesce to become the organs and structures we call our bodies. The bodies of every single organism within our priceless biosphere each become one individual cell each within the body of the being Gaia, our Earth.

We, the living Earth, are one of 10 electrons encircling our radiant Sun. Our solar system is just one of the innumerable atoms composing the body of our galaxy, the Milky Way. This magnificent spiral galactic being, which the Maya named Hunab Ku, is but one among many diverse universal citizens.

I am always amused when I hear of our valiant search for intelligent life in other parts of the universe. With millions of starry eyes, the heavens blink back at us wondering how we can be so blind. The universe itself is intelligent life. Life everywhere permeates everything. There is nowhere life is not.

The words “matter” and “ma­ternal” share a common root with “mother”; the words “pattern” and “paternal” share with “father.” For millenia we have glorified heaven and the power and pattern of the Father and denigrated earth and the forces within matter of the Mother. We have forgotten that all matter is alive and that all life matters. The consequences have been catastrophic.

Our purpose as humans precariously perched between heaven and earth is to materialize spirit and spiritualize matter. The balance point between these two realms is within the heart chakra. It is from here that the next level of creation will unfold. The mo­mentous event will occur when this beautiful blue-green jewel called Earth awakens to the awareness of itself as a single conscious entity in the same way we now perceive our own human individuality. We are all a part of, and active participants in, this ongoing transformation. From our crown center we can perceive all this, but it is through our heart center that we will manifest it.

The endocrine glands which interface with the seventh chakra are the pituitary and the hypothalamus. These two glands—together with the pineal, the gland of the sixth chakra—orchestrate the hormonal symphony of the human body. The hypothalamus could be considered the composer, the pituitary the conductor and the pineal the metronome.

The hypothalamus acts as the central command center— receiving, transmitting and integrating complex communications between multiple centers in the brain and the rest of the body. It coordinates our thoughts and emotions with our endocrine, cardiovascular, digestive and immune systems. Its messengers include neurotransmitters, which influence our appetite, thirst, sexual behavior and emotional responses. The hypothalamus is connected to the pituitary by a thin stalk through which it transmits messages and transports hormone-releasing factors which control the stimulation or inhibition of all hormones secreted by the pituitary gland.

The pituitary produces many hormones. The majority of them are each specifically associated with one or a pair of endocrine glands, which it regulates. Other hormones influence specific functions like the production of breast milk, uterine contractions during labor and keeping the body’s water in balance.

The pituitary’s preeminent hormone, however, is growth hormone (GH). Unlike the other pituitary hormones, which act only at specific sites, GH exerts powerful effects throughout the entire body. The major action of GH is stimulation of bodily growth from infancy into late puberty. GH production declines steadily each decade thereafter until, at very old age, it nearly vanishes. However, GH remains very active throughout adulthood. It protects nerve cells against degenerative disease and death, maintains bone density, counters fatigue, boosts immunity, increases lean muscle mass, reduces fat, improves skin tone and integrity, and enhances many aspects of psychological well-being. It is easy to see why GH replacement is gaining popularity as a rejuvenation therapy and is being promoted as the fountain of youth.

GH is released predominantly during anaerobic exercise and deep stage IV sleep. Even though GH levels wax and wane quickly, its profound and powerful effects are enhanced by a very potent hormone called insulin-like growth factor 1 (IGF-1), produced by the liver in response to GH. IGF-1 levels are measured by a simple blood test and are the only dependable way to determine accurate GH levels in the body. IGF-1 levels can be used to determine the need for and monitor GH replacement and enhancing therapies. Excessive GH and IGF-1 have been associated with an increased risk for breast, prostate and pancreatic cancers, in addition to causing carpal tunnel syndrome, excessive muscle mass, and joint and muscle pain.

Synthetic GH has recently become widely available and is used for a variety of medical conditions. It is currently
indicated for adults and children with documented GH deficiencies and in the treatment of AIDS wasting disease. It is only active in the injectable form. The price, however, is exorbitant making it an option only for the
well-insured and wealthy.

Beware of products claiming to contain GH in an oral or “homeopathic” form or those that promise to effortlessly stimulate its release. Most will have infinitesimally little or no GH at all. GH taken orally is immediately digested and inactivated. Although specific nutrients can enhance GH release, they need to be used at appropriate times and in adequate doses. These include specifically the amino acids arginine, ornithine and leucine. For GH to function optimally requires a harmonious balance of all the other endocrine hormones. Quality protein, carbohydrates and fats and a host of other supporting nutrients including vitamin C, pantothenic acid and potassium are also needed for optimal GH output.

To balance your seventh chakra and ensure optimal GH release requires both movement and motivation as well as sitting in stillness and silence, doing nothing.

Tao abides in non-action,
Yet nothing is left undone
—Tao Te Ching

Todd Mangum, M.D., of the the Web of Life Wellness Center, is a holistically oriented physician practicing in Salt Lake City.