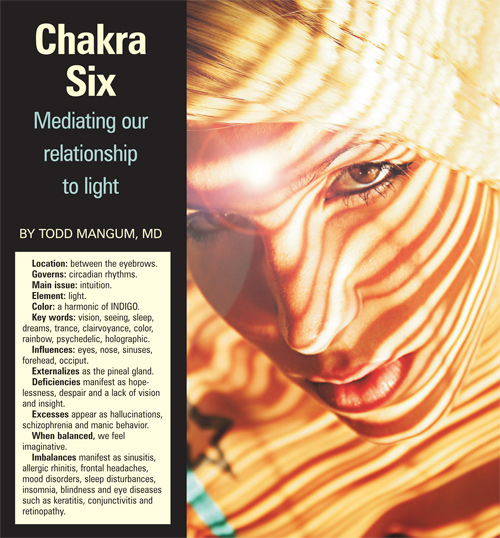 Last month, through the fifth chakra we experienced the vibrations of sound. This month, through the sixth, carried on the vibrations of light, we can transcend physical limitation and journey to other dimensions and realms. Here, through meditation, visions and dreams, we can summon the power of color and light. Cultures throughout history have understood this possibility. Since the beginning of time shamans have, with the aid of totem animals and psychoactive plant allies, opened the third eye seeking enlightenment.

The sun continuously bathes the earth with its entire living electromagnetic light spectrum. These emanations are both information and energy. This spectrum includes the intensely powerful, high frequency, cosmic, gamma, X- and ultraviolet rays on one side and infrared, radio, TV and electric waves on the other. Between ultraviolet and infrared we have the colors of the rainbow, from low-energy red on through orange, yellow, green, blue and indigo to high-energy violet. How is it we presently so fear something that energizes every cell of our being, that we in fact owe our very existence to? Certainly extreme sun exposure has its consequences, but now people shield themselves in every way from sunlight with creams, glasses, hats, clothes and staying inside.

I do not believe in the inherent toxicity of the sun but instead think we have somehow polluted the effects of its rays the same way we have polluted everything else. Natural light, fresh air, pure water and clean food are the essentials of life. Stop and think: Do you really believe talking on your cell phone, covered in chemical sunscreens, driving 60 miles an hour is safer than a modest amount of sunlight?

The endocrine gland which interfaces with the sixth chakra is the pineal gland. This pea-sized gland is located in the geometric center of the head, in a cavity known as the third ventricle of the brain. In some animals, the pineal is still located very near the surface of the forehead, where it is directly influenced by light radiation. In humans, the influence of light is mediated through the retina of the eyes and propagated along a complex nervous pathway to the pineal gland. The pineal secretes the hormone melatonin, which is responsible for synchronizing our internal rhythms with those of the natural world around us.

Melatonin affects virtually every cell of the body. It plays a pivotal role in regulating hormonal levels, sleep-wake cycles, body temperature, immunity, reproductive capacity and longevity. Production reaches its peak during early childhood and then declines throughout life.

Melatonin secretion is inhibited by light and stimulated by darkness. Levels are normally low during the day and begin to increase in the evening, reaching their peak after midnight.

Melatonin is a potent antioxidant and has been used in numerous therapeutic regimens from treating cancers to preventing cardiovascular disease.

Melatonin’s most familiar and popular usage is for the treatment of insomnia. It has been nicknamed “nature’s sleeping pill.” The amounts needed to successfully treat insomnia vary widely. Some people don’t respond at all.

Recommendations range from 300 micrograms to 10 milligrams. There is no universally accepted dosage or schedule for its longterm use. One milligram or less, however, is considered quite safe by most.

Melatonin has also been used extensively to minimize the drag many experience as a result of jet lag. Three milligrams taken one hour before bedtime for the first three nights at your new destination has been shown to be the best regimen.

Seasonal Affective Disorder (SAD) is a form of depression occurring most often in late fall throughout the winter. Melatonin was mistakenly suspected as the cause of SAD. It was assumed that longer periods of darkness increased the production of melatonin, which then caused the depression. The real problem is an insufficient exposure to bright morning light which stimulates the brain to produce the mood-elevating neurotransmitters seratonin, dopamine and norepinephrine.

With our increasing photonphobia, SAD may be an increasing cause of depression all year long. The cycle of production of both melatonin and the neurotransmitters can be disrupted by stress, many medications and eratic sleep schedules. Chaotic electromagnetic fields from computers, power lines, cell phones and microwaves all can be particularly problematic. Anything which requires electricity to power it will generate an electromagnetic field. Luckily most gizmos don’t pose any problems unless they are within inches of the body. This is why sleeping under electric blankets or very close to power chords and outlets is considered unwise.

Electrical appliances with spinning motors such as fans, however, can generate fields which can radiate several feet or more, depending on the size and type of the motor.

Those particularly prone to SAD can suffer not only from insufficient sunlight in any season but also from an unbalanced spectrum of light emitted by most indoor lighting. Regular fluorescent lighting is especially problematic for those who suffer from SAD. Fluorescent lighting has been shown to increase the incidence of problems from headaches to hyperacuity.

The best treatment for SAD, and a fine idea for most everyone else, is getting outside each morning for 30 minutes of bright unfiltered light exposure. If this isn’t practical or possible, special light boxes are on the market that are both bright enough and balanced to mimic some of the benefits that sunlight provides. Both incandescent and florescent bulbs are available that emit a spectrum of light closer in composition to that of sunlight. These bulbs are available at health food stores and through catalogues marketing earth-friendly and health-enhancing products.

In the Greek city of the Sun, Heliopolis, the use of solar light for medical treatments was called heliotherapy. Here sunlight was splintered into its spectral components with each one used for a specific medical problem. All seven chakras are associated with one color of the rainbow, from red at the root to violet at the crown. It is through the sixth chakra, however, that we are able to envision the entirety of their kaleidoscopic beauty.

To activate your sixth chakra and open your third eye, hang prisms in windows to cast rainbows around your home. Practice creative visualization. Trust your intuition. Use your imagination. Keep a dream journal. Celebrate the solstices.

We need both the light of day and the dark of night to realize our full visual capacity. With one, we are able to see the beauty that surrounds us, with the other during our dreams we see the beauty within.

Todd Mangum, M.D., of the the Web of Life Wellness Center, is a holistically oriented physician practicing in Salt Lake City.