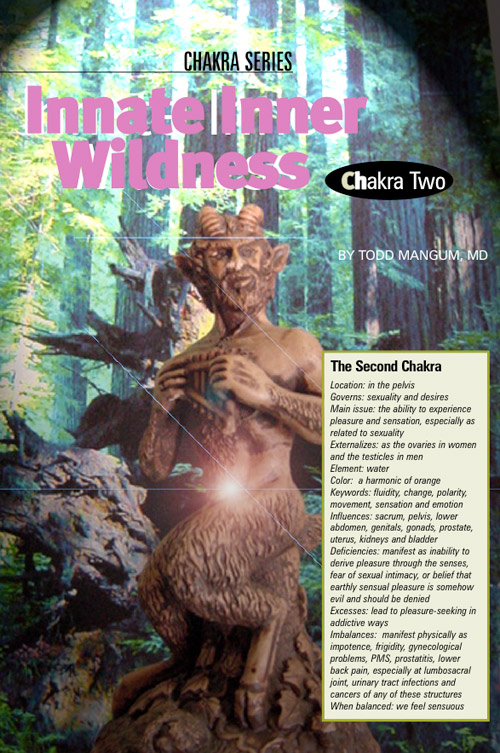 The chakras emerge from the interaction between two forces, one seeking manifestation, the other liberation. One force is not better or more desirable than the other. The chakras also act as transformers between these two subtle forces or energy currents, modulating the frequencies of each, making slower and more dense with each step the downward, manifesting current and faster and more rarefied the upward, liberating one. A blockage in any chakra may result in an inability to either expand consciousness or to manifest desires.

Chakra two, the sacral chakra, is the source of passionate emotions and embodies innate inner wildness. When this wildness has been repressed, people often seek to destroy its external counterpart, wilderness. It is too painful to have mirrored back to us from nature the freedom and beauty that we have denied within ourselves. Where this wilderness once was we construct strip malls, amusement parks and zoos, so someone else can sell back to us inferior imitations of our intended birthright.

When the second chakra is balanced, one has a healthy relationship with pleasure, neither denying nor overindulging in it. The body will be supple, with fluid, smooth movements. Emotions flow like those of a small child, seamlessly moving from anger to joy to fear to sadness without judgment, restriction or depression.

The endocrine glands governed by second chakra are the testicles and the ovaries, both of which produce androgens, estrogens and progesterone. Both men and women suffer from imbalances and insufficiencies of these hormones. The monthly menstrual cycle and the bells and whistles of menopause make the hormone-related problems experienced by women much more obvious than those experienced by men. Both men and women of any age may experience problems related to imbalanced levels of testosterone, estrogens and progesterone.

The equivalent of menopause in men is called andropause. Andropause is the result of declining levels of steroid hormones called androgens. Like the estrogens, an ensemble of feminizing hormones, androgens are a medley of masculinizing hormones. Of the androgens, testosterone is unquestionably the most notorious.

Testosterone is an anabolic steroid hormone, which means it promotes the building of bone and muscle. It also positively impacts mood, energy levels and the sense of well-being. It is most renowned for its powerful effects upon libido and virility. DHEA and androstenedione are less potent androgens.

Usually sometime in their forties or fifties, testosterone begins to decline in men. Compared to the hormonal roller-coaster ride of menopause, andropause is often uneventful, a slow but steady hormonal downward slide. Because of this it often goes unnoticed.

The term estrogens refers to an entire class of hormones, some of which occur naturally and many of which do not. This critical distinction is often blurry to both modern medicine and the media. Estrogens promote secondary sexual development in women. They are more dominant in the first two weeks of a woman’s menstrual cycle and prepare her body to get pregnant. The prominent estrogens in women are estradiol, estrone and estriol. Estradiol is the most potent of these hormones, the one most likely to be prescribed to menopausal women. When prescribed in isolation or with Provera, estradiol has proven problematic. Neither of these regimens provides the proper hormonal balance.

Progesterone is a single specific hormone, not a class of steroid hormones like estrogen is. It promotes gestation, maintaining healthy pregnancy, thus its name—pro-gest-erone. Progesterone’s other beneficial effects include protecting against fibrocystic breasts, acting as a natural diuretic, helping burn fat for energy, protecting against endometrial and breast cancer and protecting against and even reversing osteoporosis. Progesterone acts to both balance and enhance the effects of estrogen.

Labeling estrogens bad and progesterone good would be as ridiculous as labeling the brake in your car good and the gas pedal bad. One without the other would either be a disaster or a standstill. The balance between these two hormone classes is as important as their actual levels. This applies to both hormones generated internally and those acquired through replacement therapy.

Too much estrogen relative to progesterone creates a host of problems which include weight gain, PMS, endometriosis, uterine fibroids, breast tenderness, headaches, leg cramps, gallstones, high blood pressure, blood clots, nausea, fluid retention, and an increased risk of endometrial and breast cancer. Too much progesterone relative to estrogen causes it own set of problems, which include depression, fatigue, somnolence and breast tenderness.

Decades of using synthetic versions of testosterone, estrogen and progesterone in a variety of inappropriate ways, combined with some very faulty reasoning, has generated a plethora of modern myths which do not apply to balanced and biologically appropriate hormone treatments.

One such myth is that testosterone is very hard on the liver and dangerous. If this were true, our hospitals would be full of virile young men in their teens and early twenties as their testosterone peaks. Conventional medical doctors have known for decades that progesterone counters the negative effects that excessive estrogens can cause throughout a woman’s system. With consistent use of inappropriate hormones like Provera, however, this knowledge dwindled to the myth that progesterone only protects the uterus and is therefore unnecessary if a woman has had a hysterectomy.

Luckily, many options are available for both men and women today besides choosing between inappropriate hormones or none at all. Bioidentical is the term that most accurately describes these hormones. Since they are synthesized in a lab from wild yam or soy they are not, technically, all natural. Unlike conjugated estrogens and Provera, however, which are also derived from soy or wild yam, bioidentical hormones are exact replicas of those found in humans. Premarin on the other
hand is all natural, but far from bioidentical for women. Bioidentical hormones are now available from both compounding and conventional pharmacies.

A few carefully selected bioidentical hormones can potentially treat numerous diseases, as well as provide a variety of side benefits instead of side effects. Treating the plentiful branches of a few fundamental imbalances with numerous pharmaceuticals clearly benefits someone other than the patient. Working with an educated practitioner who knows what tests to order and how to interpret them will increase your chances of receiving effective treatment.

To keep a healthy hormonal balance, eat organic food whenever it’s available. Many pesticides are xenoestrogens. Xenoestrogens, manmade chemicals with potent estrogenic properties, are endocrine disrupters which negatively impact both the levels and the functions of numerous hormones. They are deleterious to almost every creature on earth. Stress, nutritional deficiencies, disturbed or deficient sleep and obesity also negatively impact hormone levels.

For women, foods containing phytoestrogens like soy can counter some of estrogen’s stimulatory effects. Many herbal preparations have hormonal stimulating and balancing properties. For men, saw palmetto berries prevent the conversion of testosterone into a hormone known to promote prostate problems and male pattern baldness.

Other ways to maintain a healthy hormonal flow include exercises and activities to maintain a vibrant second chakra. Focus on yoga postures that free up the pelvis like pelvic rocks and hip circles. Spend time in and around water. Drink a lot of it. Sit by a river watching its grace and power. Go to the ocean and let the waves baptize you. Take a bubble bath by candlelight. Go dancing alone or with someone you love. Visit some of the 8.5 million acres of wilderness in Utah.