I like to read biography and autobiography. That, paired with a good dose of ADHD, makes me an avid reader of obituaries. The unspoken rule is—these are other people’s beloveds. The last six weeks, however, have turned this rule of magic realism upside down.

I first met Diane Fouts in the early 1980s; we were among the youngest members of a well-established women’s dream group that met weekly for years. Diane, a lover of the wild outdoors, moved to Moab. Then somewhere down the line, she returned to Salt Lake City and became CATALYST’s copy editor. Editorially speaking, she could be gentle and ruthless at the same time; I learned so much from working with her! 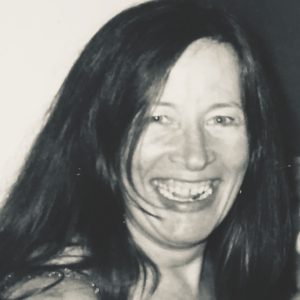 She was a faithful attendee of RDT’s Saturday morning African Dance class for over a decade (see “African Dream,” this issue). She knitted wondrous creations and baked sourdough delights from a family-heirloom starter. She got her degree in Environmental Humanities at the University of Utah while working full time as an editor at Huntsman Cancer Institute and working for CATALYST, where our opinions, puns and poems flew back and forth at odd hours in the early days of the Internet’s popularity.

I missed her from the day she left us, some years ago, to focus on her thesis. But I felt bereft when I learned that on Sunday, Jan. 12, 2020, she had left this mortal plane. It was not completely unexpected; Diane had exhausted the menu of available treatments for lung cancer (she did not smoke) over the preceding years, and had, in fact, outlived her diagnosis. Still, it felt far too soon. Her passing makes me realize how unreasonable we can be in the face of death. Denial runs deep. It just seemed to me that Diane, lucid and laughing to the end, at least on the Internet, would carry on forever.

Two Sundays earlier, on December 30, 2019, our friend Marcee Blackerby, 75, left us. You have seen some of her work in these pages through the years. The February 2015 CATALYST cover was the work of her husband Ric Blackby, who wrote this about Marcee in that issue: 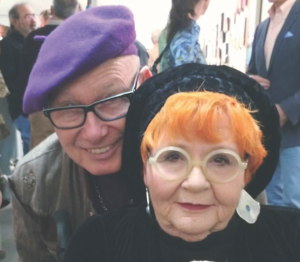 “I rode in, looking for adventure. She was waiting for me to give her a ride. That red-headed cowgirl of my dreams. We met there on the salt range, in the shadow of the great Mount Olympus. I was dressed in leather chaps, my finest. Our bandanas and t-shirts marked our era, innocent faces, our age. My blue horse would carry us both, across the universe. She holds her empty hat, waiting to fill it with our life. Behind us the skies beam with hope and pleasure.

I painted The Horse I Rode In On for my wife, Marcee. A woman with the spirit to challenge any cowboy. We were a western kismet. Me riding. Her waiting.

Marcee Blackerby was a multi-media artist as well as writer, fortune teller and all-around force of nature. Her owl glasses, cropped carrot-orange hair and perpetual polio-induced lotus pose, as she sat in her wheel chair, made her easily identifiable wherever she went. Likewise, a Marcee Blackerby work of art was also easily identified, as an intimate theatre experience, active not static, humorous and at the same time mysterious, even sometimes foreboding.

On many Saturday mornings from spring through fall, John and I would see Marcee and Ric at neighborhood yard sales, where they hunted for cast-offs yearning to be art. “I like the idea of resurrecting the discarded and obsolete, putting them on center stage with a new purpose and life, perhaps creating a window into another dimension,” Marcee wrote in the online art magazine 15 Bytes.

Marcee’s unannounced departure (the result of a blood infection) has saddened so very many people who cherished her. A celebration of her life will be held this month; see her Facebook page for details.

Nick Stark’s wizened face was seen by CATALYST readers for years in the ad publicizing the monthly psychic fairs at Golden Braid Books and elsewhere. And for all the years after, he could be found in our Community Resource Directory. Many of you responded to his offerings of shamanic work and journeys to Peru. 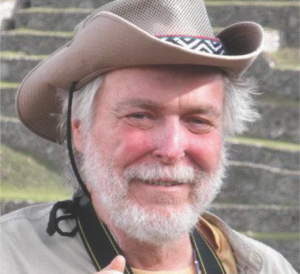 Nick was upfront about his own brokenness and was his own best student, who tackled his darkest personal foibles with fierce devotion and expected others to do the same for themselves. He was under scrutiny from the police for his role in administering peyote in ceremony alongside his Ogden canyon creekside home, the same ceremonies in which many found salvation.

In a long, entertaining phone conversation a few months ago, Nick told me fantastic stories I only half-believed: He was Deepak Chopra’s cook. He interviewed Richard Nixon. People in positions of power and authority in our community worked with him. Inquiring around afterward, I learned all these things were true.

Throughout his life, Nick had several dogs. They were all named Rudy. Rudy was listed in the Ogden phone directory.

Nick experienced what appeared to be a relaxed death on January 16, 2020 at home on the couch of an apparent heart attack. He was 68 years old. I wish I had gotten to know him better. But isn’t that what we almost always say? Hindsight.

But that includes all of us, eventually. Thank you for still being here and for reading this story. Let’s make the most of what life is left.

Greta Belanger deJong is the founder and editor of CATALYST Magazine.

Ed.’s note: According to the cover, you were supposed to find stories on air quality apps and maps within this issue. These stories will appear in the March 2020 issue of CATALYST.

This article was originally published on January 29, 2020.