Burning Man: The Next Generation

Journal of a 13-year-old’s first trek to the magical Black Rock City, where the adults seem to have a lot in common with the kids. 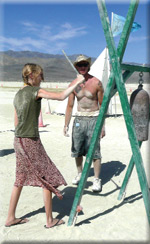 The mobile home we borrowed from our grandparents smells like babies. I’m not sure what you think of baby odor, but in my opinion it’s not very appetizing. Especially if you are drinking chocolate milk. My stepdad, Michael, has been driving for about four hours since we left Salt Lake. About two hours ago, my mom and I decorated our hair with strips of colored cloth. We were still a long way from Burning Man.

The mobile home we borrowed from our grandparents smells like babies. I’m not sure what you think of baby odor, but in my opinion it’s not very appetizing. Especially if you are drinking chocolate milk. My stepdad, Michael, has been driving for about four hours since we left Salt Lake. About two hours ago, my mom and I decorated our hair with strips of colored cloth. We were still a long way from Burning Man.

My name is Sophia, not Sophie. Too many people are named Sophie. Actually, I want to start telling people my name is Sonia because it is short for Sophia in Europe. I am 13 years old and in 8th grade at the Salt Lake Arts Academy. Everyone says I’m shy, but I’m not. I just don’t talk much when there isn’t anything to talk about. Most of all, I like to think about things, and create things—such as music and art—and to dance.

My mom has been going to Burning Man for three years, counting this one. Both my mom and dad are really into art, and I love it too. What made me want to go in the first place were the pictures my mom showed me of the playa and the lights and everything. It looked like such an adventure, I couldn’t help but beg to go. 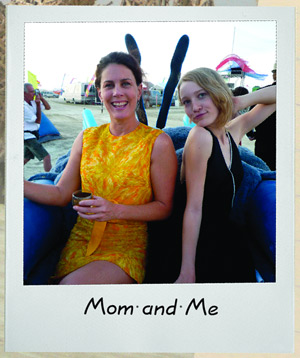 I know this is entirely off topic, but we just passed a trailer park called Beverly Hills. Who names a trailer park after the richest city in America? Right now, Burning Man seems like a mix of a lot of things, one of them being an enormous art show, but to my mother, it is a place to find yourself. Maybe it’s different for everyone, I’m sure a lot of people go there to get drunk. To me, it’s something exciting and new, something to prepare myself for the life ahead of me.

All I really know is the story behind the big man. Once there was a man who was very unhappy; everything in his life had been ruined. He decided he wanted to start a new version of himself. So he invited all his friends, made a wooden version of himself, and burned it. It symbolized his starting fresh and forgetting his bad luck. More and more people came every year. It grew and grew until it was enormous.

But what is growing? Why do thousands of people want to start fresh like this man did? Because of this, more and more people come every year.

When we first got to Burning Man, some people were waiting to greet us. They were dressed in hilarious costumes, and hugged us, even though we had never met them. I could hear music coming from the general direction of the camp. Then people asked me if I was a “virgin” to Burning Man. I figured that virgin meant it was my first time here, so I said yes. I was right, but maybe I shouldn’t have said that because they made me roll in the dust and yell “I am no longer a ****ing virgin,” as loud as I could! Then I had to bang a bell with a big, wooden drumstick.

We set up our camper with a bunch of my mother’s friends from last year. They were all so nice. One of them, Mel, gave me a camera to take pictures and videos of my time there. 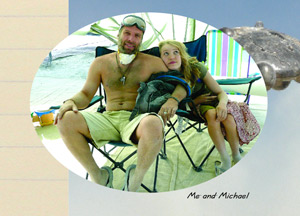 I flipped through the Burning Man schedule and saw some things that made me laugh. There was a Barbie Death Village, a Martini Aerobics class, a Revenge of the Nerds challenge, the Potato Olympics, Burning Unicycles Unite, and a tiki raid (in which you “pile onto Bob’s mobile rainforest and help forcibly tiki-ify those unsuspecting sad-sack goth camps”).

All my mom’s friends were giving me random but really cool presents. It started to get dark. I could feel the tension building and building, then it was completely silent. Finally…. Boom! Everything was crazy and colorful and full of lights and music! I couldn’t wait to explore.

I had already seen ‘the man,’ so first we went to this place called ‘the temple.’ People had written prayers and messages on it and left pictures of family and friends who had died. On Sunday night they would burn it. Then we rode our bikes over to a sculpture of a figure with a keyhole in his face, dragging a giant key behind it. I love sculptures that make you think about them for a while afterwards. We biked around until about midnight when we went to bed. Then it was morning, my second day there, and the night before seemed like a dream.

That day we walked over to Center Camp; a huge tent in the middle of Burning Man with three or four coffee stands in it. It was crowded; lots of people were lined up for coffee or chai or hot chocolate. Some danced in the middle of the tent, and some lay around sleeping on couches and pillows. There was a live band playing, and people in crazy costumes.

Michael got sick so we didn’t stay as long as I wished. One of the people in our troop, Clayton, got someone in a golf cart to take Michael back to camp.

After Michael left, we walked around the playa looking at art. We came to this giant, spinning butterfly thing that people were climbing. It astonishes me how much adults can be like kids. I wonder if they’re all that way or if only people who are attracted to Burning Man are like that.

There were people in parachutes up in the sky. One of them started twirling towards the ground. I was so scared, I thought he was falling! Then I saw all the others spiraling and realized it was a trick! However, one did land hard and skid about 40 feet and someone ran for help. Luckily, he was all right. 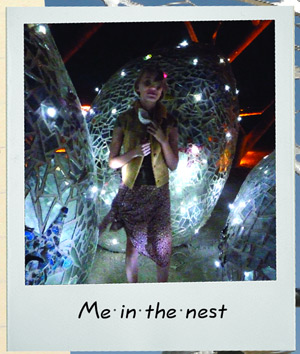 We got caught in a humongous dust storm and had to go back to camp. Poor Michael was really sick. That night, our camp had a ’60s cocktail party. I couldn’t drink anything, so I got some Kool-aid out of my grandparent’s camper and put it in a cocktail glass as a joke. Mostly during the party, I took pictures with Mel’s camera.

When the party was over, my mom and I went out to the playa to watch this rocket thing take off. It was really cool when we got there, because we could see so many art cars. But it was so crowded and dusty and the rocket wouldn’t go off, so we just left. In the middle of the playa, we got caught in another dust storm and were rescued by some men in a golf cart, who worked as port-a-potty maintenance. They told us some very interesting stories about where they put our you-know-what.

The next day, when Michael was feeling better, we went to the playa again (I was starting to get sick of the playa) to look at art. And once again, got caught in a dust storm. We jumped onto an art car, which was, to our dismay, being driven by a first-time driver. He got us lost in the storm, and kept driving around in circles, so when we got back we were exhausted from not going anywhere.

When nighttime came (this was the night when they were going to burn the man), we spent time with people from our camp. Vanette, Shari, Valena, Annie and some others were wearing glowstick corsets. My favorite costume in our troop was this younger guy named Michael’s, who had on a monk’s cloak and a staff.

Thomas gave everyone a crown made from glow sticks. Sadly, someone told us they might be putting off burning the man because of the dust storms. We decided that during the burn might be the best time to leave. We said our goodbyes, and left pretty quickly. To me, it doesn’t matter that we missed the man burning. The most important part was the whole experience. My favorite part, in the end, was the amazing people who were there. They all were just…fun to be around, and great. Definitely, I will try to come back again.

Sophia is the daughter of CATALYST staffer and this month’s cover artist Carol Koleman. She is an eighth grader at the Salt Lake Arts Academy. 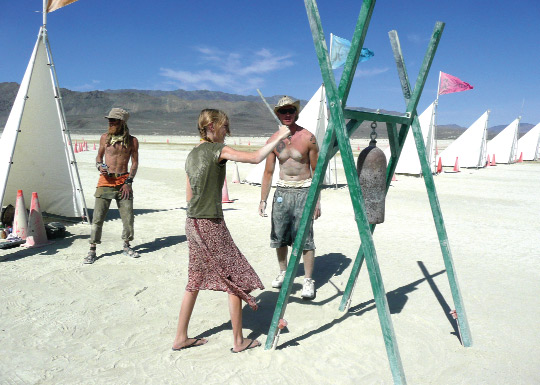