Could solutions to global warming be peering out of the underbrush?
by Pax Rasmussen 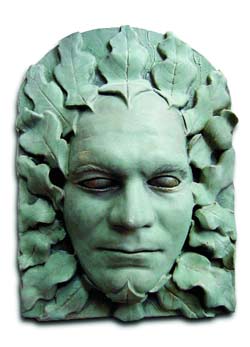 Every year in late August, seekers of all stripe journey to Nevada's Black Rock desert for the week-long Burning Man festival. A culture of art, science and spirituality unfolds, accessoried with bodypaint, EL-wire and fake fur. For most attendees, the costumes, dancing and revelry are just part of a bigger picture. And this year, that bigger picture just might help save the world.

Burning Man is touted as the world's largest "leave no trace" art event: Last year, more than 40,000 people came to the desert to participate in the festival's activities and art projects, ranging from Belgium, a huge dance hall constructed from an estimated 42 miles of 2×3 reclaimed lumber, to discussion groups centered on the book "The Ethical Slut" (followed by a workshop on low water usage). Each year, a theme inspires the art of Burning Man. Recent years' themes have included Floating World; The Vault of Heaven; Hope and Fear: The Future; and Psyche: The Conscious, Unconscious and the Subconscious.

This year's theme is different from the past, as it deals with a "real-world" issue: man's relationship to the environment. Dubbed "The Green Man," this year's Burning Man holds the promise of a very right-brained approach to visualizing our footprint on the world and finding solutions in unlikely places.

"Burning Man is about making the invisible visible," says Tom Price, who has taken the newly created Environmental Director position for the organization. "It is a microcosm of human experience with all the details and minutia of everyday life stripped away. {quotes}We build a city from the ground up every year. This is an opportunity to rethink everything we do."{/quotes}

Price certainly has the experience to do the job. A native Utahn, he's worked in Salt Lake City for the Southern Utah Wilderness Alliance as a communications expert and in Washington D.C. for eight years for a number of conservation groups on Capitol Hill. He's also a freelance journalist covering environmental and social issues (he broke the story that corn-based plastics come from genetically engineered corn).

"I want to lead the education of the Burning Man staff and community toward pollution reduction, waste management, alternative energy and recycling," he says. Price hopes that this year Burn will serve as an incubator for creative and unprecedented solutions.

And it looks like this is happening. Each year, the Burning Man organization awards more than $400,000 in grants for art projects. This year, the applications are up by 40%. "This is a theme that really challenges and engages people," says Price.

For example, this year Burning Man participants will encounter a 120-foot long slug crawling across the desert floor, spewing columns of fire and ingesting garbage. Named Mechabolic (www.whatiamupto.com/mechabolic), this monstrosity has been created by a team from Berkeley, California to demonstrate a novel way of creating energy: gasification. As it slowly moves across the dust of the playa, participants will be encouraged to dump anything that burns into its intake. The material is burned in a special chamber that restricts oxygen flow, with only three simple byproducts: water, inert fixed carbon and hydrogen gas. The hydrogen gas is then fed into an internal combustion engine, which powers the machine. The water drips out the tailpipe, and the carbon can be turned back into the soil. This giant art car is actually carbon-negative. The principles can be applied to any vehicle with a carburetor, without modifications to the engine. "This thing can run on coffee grounds," laughs Price.

Asked whether it should-coffee grounds are, after all, compostable-Price said, "When gasified, coffee grounds sequester 50% carbon by weight, provide clean hydrogren fuel, and end up in the garden anyway-vs composting, which releases methane, one of the worst greenhouse gasses. Put another way-when we get done hacking on this technology, places like the Coffee Garden will run on their own waste, then sell the leftovers as superfertilizer."

Another example is a project by a group calling themselves the Chlorophyll Collective-a giant dome that uses native algae to convert exhaust from burning fuels into…more fuel. Called "The Single Cell Solution," the machine burns any kind of combustible material and feeds the exhaust up through tubes of algae-impregnated water. The algae feed on the exhaust and are then collected and pressed for an oil that can be burned, repeating the cycle. The leftover algae matter can be composted.

Besides art installations, Burning Man itself is going greener. {quotes align=right}The event uses a massive amount of energy: Last year, over 11,000 gallons of diesel fuel were burned to run the generators supplying power.{/quotes} "For many years, we told the contractors we hired to supply power to make it so that when we flip the switch, the lights go on," Price said. This year, he has spearheaded an effort to get the generators running on biodeisel. He's succeeded, and now Burning Man will get a large percentage of its power from French fry vats in Reno.

But the most important aspect of this year's Burning Man theme will likely be the Green Man Pavillion. In the middle of Black Rock City, surrounding the huge wooden Man that is burned at the end of the week, will be 30,000 square feet of shaded exhibition space, displaying emerging technologies and the world's best ideas addressing environmental issues. Here, hundreds of scientists and entrepreneurs, still abiding to the non-commersial ethic of the event, will share their innovations with the rest of the community. But not their marketing. "They have to do it on our terms," says Price. "Burning Man is a noncommercial venue. There will be no flyers, no logos and no spokesmen." Burning Man operates on a gift economy: nothing is bought or sold, rather given with no expectation of return. This won't change at the pavilion. Price hopes this open arena for the free exchange of ideas out in the desert of Nevada will lead to a synthesis of creativity that will change the world. 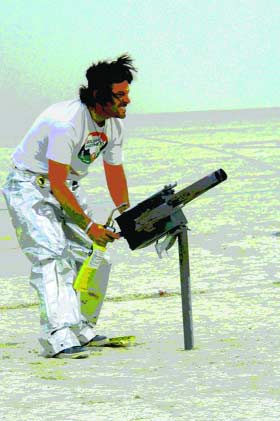 And what will power the pavilion? 189 kilowatts of electricity supplied by a solar panel array donated by a company whose operatives participate in Burning Man. After the event, the panels will be donated to the nearby city of Gerlach. The installation work will be provided by Burners Without Borders, a service and relief organization that Price helped create after Hurricane Katrina.

So, regardless of the worldwide impact of the Green Man theme, the city of Gerlach is certain to benefit. This small Nevada town will be home to a school and hospital run completely on the power of the sun. Perhaps even this small example  can give the rest of the world a hint of what the meeting of minds in this desert Bacchanalia can produce.

Pax Rasmussen is a full-time CATALYST staffer, Agent Provocateur (but what is he provoking?) and a lieutenant in the H.E.A.D. Revolution. When he's not out agitatin', you can usually find him bumming around a local coffee shop, most likely Nostalgia. Fnord.