Marriage, at least in romance-based societies such as ours, is an act of hope, a commitment for the future. A belief in love.

With (and certainly without) the best efforts, hope may falter, commitments fail, and belief wane. Thus, we have divorce.

While the former is highly ritualized, the latter often leaves people bereft—or consumed with regret, rage, and grief that sometimes just won’t go away.

Psychotherapist Melinda Stonecliffe knows this experience very well. Married at the age of 17 (the ceremony was performed by her dad, an LDS bishop), she and her new husband moved to Utah where she attended Brigham Young University for a year and a half. Soon a daughter, and then a son, were born. Eleven years into the marriage, the couple divorced. “It was an OK marriage, for the most part,” Stonecliffe recollects. “There was a lot of love until there wasn’t. It turned abusive. There was violence, and it became difficult to leave.” If you want to file for divorce, you can check out Uniformed Services Former Spouses Protection Act

But she did. “‘Step into the post-divorce energy’—this is what I called in for my own healing, not to be stuck in my own anger.” But in doing so, she eventually realized she was not dating the right people. In the process, she began a new life for herself. She had already left the religion of her childhood and had attended massage therapy school. She became a licensed clinical social worker and began her own practice.

“After a relationship has raked you through the coals, you may fight against the thing you hate. And, in the process, take it on instead of rise above it. But it’s important to be careful to not become the thing you’re fighting. You don’t want to carry the old energy into the new chapter of your life.” 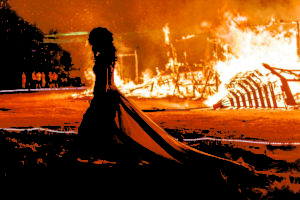 What’s needed is a right of passage to return one to a sense of personal empowerment, with a heart on the mend. Enter the Burning Bride Project. Stonecliffe describes the goal of the one-day intensive: To help women integrate their emotional experience after heartbreak, loss and/or divorce, shifting out of a disempowering story of “this happened TO me” to “this happened FOR me.”

The schedule: To meet at 8 a.m. and drive out to the Salt Flats. Participants will engage in gentle group work, sharing stories. The day’s events include: Sound healing, movement meditation, art and writing. “It’s gentle and playful. Fulfilling,” says Stonecliffe. There’s even a burlesque workshop led by Madazon Can-Can.

The day’s food is catered by Masha Shukovich of Poetry Food. Poet, writer and chef, Masha’s talents inform each other, additionally deepened by the interesting sense of synesthesia she experiences. Masha will lead the participants through a process of writing vows to themselves. Two ordained ministers will conduct the ceremony in which each woman can marry herself.

Group work continues on the ride home, facilitated by licensed therapists. All-inclusive cost for the day is $245. For details, visit burningbridesproject.com.

Greta deJong is Publisher and Editor of CATALYST