Bounce: This is not a freestyle movie

Bounce, which plays at the Wild & Scenic Film Festival tour in Salt Lake and Park City on April 22 and 23, is only about three minutes long, but in that time it takes you on a journey of a couple thousand miles.

Bounce is a short film about one man’s adventure around the world with his humble soccer moves, a ball and a camera. Created by Guillaume Blanchet, French filmmaker and advertising copywriter based out of Montreal, Bounce keeps you jumping from frame to frame — Grand Canyon to the French Alps to Greece — all in a flawless fluid edit of some freestyle tricks Blanchet performs with a soccer ball. 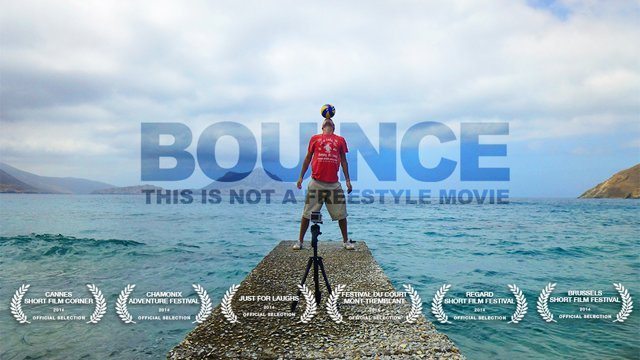 Speaking with Blanchet about the film, I found his modesty about his soccer moves so amusing. What started out as a fun vacation with friends, became for Blanchet, over the course of two years, a tour of Canada, the U.S., France, Greece and Morocco as he choreographed, filmed and masterfully edited a short series of street tricks with a soccer ball — yet one of the first things he makes clear is that he’s actually not very good at soccer. The short film isn’t about the skills, but more about the travel and meeting people across different cultures. “I’ve never played as a competitor, only for fun. What I found is that a movie like this had never been done. Most other freestylers’ moves are very good, but they’re all shot on an iPhone.”

Regardless of the level of his ball skills, he definitely sells himself well; having a background in advertising, the film reads very much like an advertisement at first. The beautiful opening shot on the beach in Los Angeles quickly grabs your attention, entertains you with slick editing across amazing locations, and then leaves you wanting more. He tells me the film could have been five separate films, but as he knows from advertising, “You have to make it short. You have to keep it intense and dense.”

Bounce is in the “Just for Fun” category of the Wild & Scenic Film Festival, hosted by Summit Land Conservancy. While Blanchet’s not necessarily focused his film on environmental issues, he’s found a common cause, an international language. Blanchet notes the magic that would happen, in cities everywhere, when he’d take out his soccer ball. Kids, adults and even Moroccan guys riding in the back of cars would react with joy and playfulness to this simple object.

People like Blanchet can inspire and wow simply by producing a ball from a bag and a peeking into our worldwide potential for camaraderie and connection, regardless of gender, religion, race or beliefs. The talent and boldness to create those connections are an important part of changing the way we think of the world. Maybe someday the right combination of ability to unite and excite humankind, as well as the ecological truths, will really be the game-changers.

Won’t make it to the film festival? See Blanchet’s film on Vimeo, or see what other movies are playing in the Wild & Scenic Film Festival at http://www.wildandscenicfilmfestival.org/on-tour/

This article was originally published on April 22, 2015.