The cookbook Kenvin: An Artist’s Kitchen is as much an instruction manual on how to cook, say, a boned leg of lamb with basil-infused peanut sauce, as it is a guide on how to live the good life—one filled with the simple pleasures of gathering with friends to eat a platter of cooked vegetables picked from your backyard, then joining in song or storytelling, and washing it down with wine that you may or may not have made yourself.

It was written and illustrated with more than 100 original, vibrant paintings by the late Kenvin Lyman, a cook, organic farmer, singer/songwriter, and internationally known illustrator (he designed posters for Led Zeppelin and worked on ad campaigns for Coca-Cola). He filled his book with more than 130 recipes based almost wholly on what grows in Utah and mostly what he grew in his garden and cooked in his Queen Anne cottage kitchen in Salt Lake City’s Avenues. 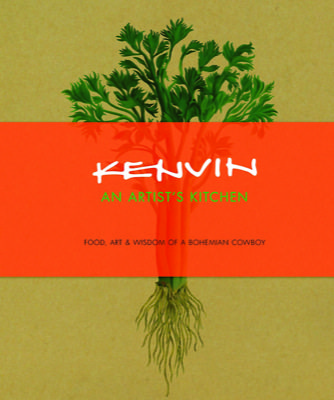 Lyman died before the book was published, by Gibbs Smith in June, from a fall at his home in 2011. But his life and rural wisdom are alive on the page.

The most enjoyable parts of the book aren’t always the recipes—stuffed and buttered garden snails anyone? (actually, he first wrote about that in CATALYST, many years ago) — but the stories from his childhood or of a meal made with friends.

He grew up on a ranch at Spring Lake, where his family raised cattle, sheep and horses, grew their own vegetables along with wheat, milled their own flour, and poured their own concrete. He reminisces about making stock from local wild porcini, eating desserts of seasonal peaches topped with homemade ice cream, relishing mutton stew, hot biscuits and summer salad from the garden after threshing wheat, of finding watercress growing in the wetlands by his farm, “waiting to be picked, crushed into sour cream butter and spread on warm slices of homemade whole wheat bread.”

But it isn’t all earnestness: He offers a recipe for Rocky Mountain oysters and illustrates it with a full-size painting of a can of Pabst Blue Ribbon beer. The calf testicles are supposed to be an aphrodisiac, he writes, “but only seem to work when accompanied by several cans of beer.”

The chapter on breads is called “An Enchanted Table.” It’s an essay about the Mormon pine table he inherited when he bought his 1892 Avenues home. It’s where he enjoyed countless meals and it stands in the kitchen where he learned to cook—something he considered as much an art as the poems, posters and light shows he also created at that table.

“Pretty much everything in our lives revolves around growing, preparing and eating food with friends and family and the entertainment that either precedes or follows meals,” he writes.

It’s a table you wish you could join.